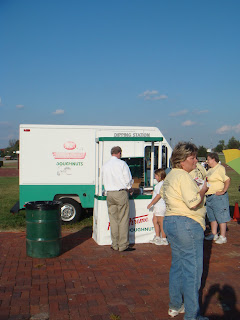 This week’s donut adventure was completely unplanned, a total surprise. And what a great surprise it was!

I have been working in Louisville, Kentucky. While out of town, I often try to find a race in which to participate. At a running store in the area, I found out about a race being held at Churchill Downs. Double fun–a race and a chance to see a bit of history!

Off to the race I went, through the tunnel and into the infield of the track. There was a guy at the race with an art car (well, a truck actually) that blew all sorts of crazy bubbles and five gallon buckets of bubble fluid were available with all sorts of cool bubble wands. There was also a guy teaching calf roping with practice roping dummy. That was all fun but…there was a Krispy Kreme truck. Donuts must be near!

Not only were donuts near, it was a really fun set-up. Little boxes containing two glazed Krispy Kreme donuts were stacked up, waiting to be had. After grabbing my box, I took them to the dipping station where they were gently dipped in a swirling vat of chocolate frosting and then dunked into red, white and blue sprinkles. And I got a paper Krispy Kreme hat. Serious fun for a donut fiend!

Scott Weaver, the Krispy Kreme fella, told me that Louisville is the U.S. leader in per capita donut consumption. He was surprised I had never seen a mobile dipping station. Have you? 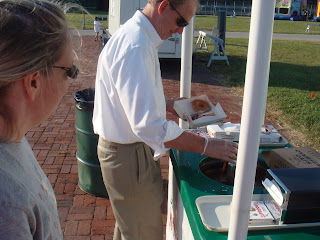 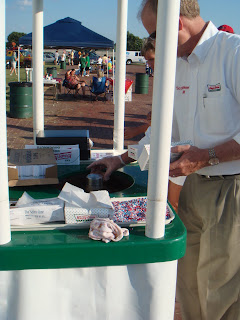 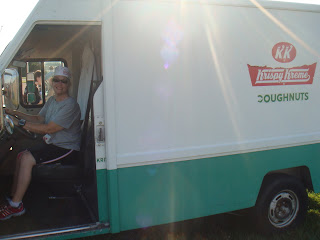