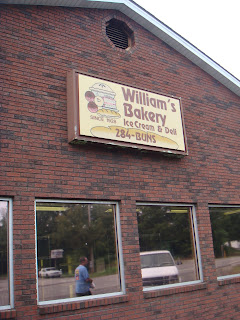 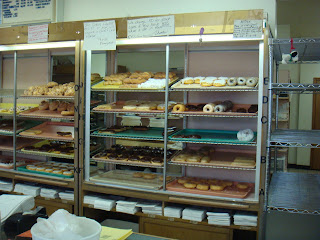 This week’s donut adventure took me to Indiana. Still working in Louisville, Kentucky but wanting to venture out of the city a bit, John and I went for a short drive to Clarksville, Indiana to visit the William’s Bakery.

Our friend Pam in Louisville suggested the William’s Bakery. She had never been there but had recently tried their hermits, which I think of us a cookie bar. It seems in the south they have more of a scoop shape and are dipped in chocolate. Without even trying this variety, I can safely say I prefer the southern version!

The William’s Bakery had a wide variety of baked goodies with bakery cases stretching from one end of the bakery to the other. Cookies in lots of shapes and sizes, pies, cakes and of course, donuts! A small table to the side was loaded with day-old goodies but we came for the fresh stuff.

After a short wait, John made his selections, which included a donut-shaped pretzel. I’ve never seen that before. It was made with raised donut dough and chocolate frosting. 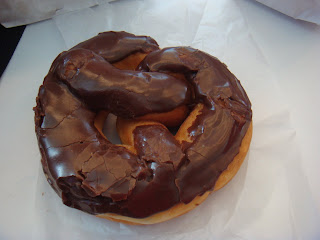 John also spotted a French Crueller that was completely frosted with regular glaze and then dipped in chocolate. The verdict was that it was a little too sweet but soft, fluffy dough waited inside all of that sugary coating. 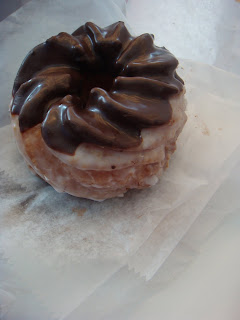 A guy was working in the back of the bakery decorating cakes. I am finding it interesting in this part of the country that bakeries are expected to sell donuts. In the Midwest, donut shops and bakeries are two separate things. I wouldn’t expect a bakery to offer donuts (and have found only one that does in Kansas City) and wouldn’t expect to find anything other than donuts and fritters at a donut shop. I like that I could buy cookies, pies, donuts and order a fancy wedding cake all in one spot. 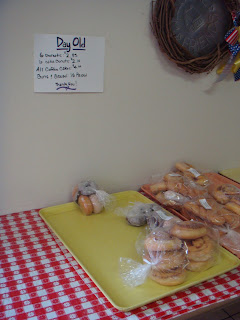 I drove past the Donut Kastle in Louisville donut shop and didn’t get to try it (I KNOW!!) but thought they had a clever gimmick–they accept text orders. I love that I could text my order and never worry again about not getting a creme-filled chocolate long john. I could sleep easier on Saturday nights if I knew for sure my favorite donuts would still be available at 9 a.m. on Sunday. (You can see their sign in the background of this photo.) 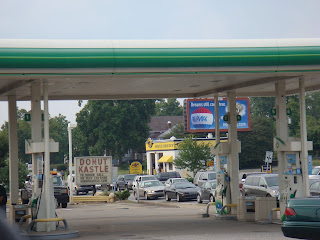