Every year in the Fall, I hear lots of advertising for the Louisburg Cider Mill’s Cider Fest. The news reporters often broadcast from there and lots of friends go every year. The chatter about cider donuts alone was enough to convince me to go!

John and I went to the Louisburg Cider Mill on the last day of Cider Fest. We thought we were getting there early, although not early by donut standards, just early by festival standards. We ran a 5k in Independence, stopped to grab coffee on the way and made the hour trip to Louisburg, arriving around 10 in the morning. The parking area was already filling up and lots of folks were enjoying the festivities. They had several fun inflatables for the kids, hayrides, a corn maze, a pancake breakfast, craft vendors, pumpkins…There was enough to do to fill most of the day but we had only a short amount of time and a mission to find the cider donuts.

Inside the Cider Mill’s store, we found every possible type of apple product imaginable. Apple candles, lip balm, butter, candy and cookbooks full of apple recipes filled the store. We located a viewing window into the donut and caramel apple prep area and watched for awhile. The donuts were fried in a donut-matic machine then rolled in a cinnamon sugar mixture. Lots of families were watching the donuts being made, enough that we had to wait in line to get a spot next to the window. Ah, the magic of donuts! 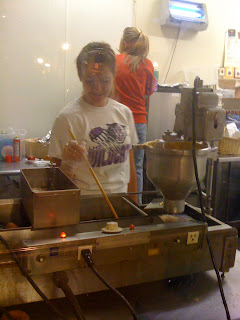 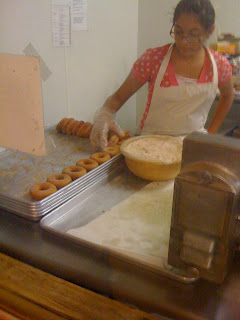 After picking out a few apple goodies, we headed to the cash register to obtain some of these famed cider donuts. We bought a bag of 6 and head outside. But our donut mission wasn’t over yet.

Our friend Carol had a booth at the Cider Fest and it was her birthday. What better way to celebrate a birthday than with a donut! We put a candle in a donut and surprised her with our out-of-tune version of Happy Birthday. I must say birthday candles look very much at home in a donut. Perhaps this is the start of a new trend. Cupcakes beware! 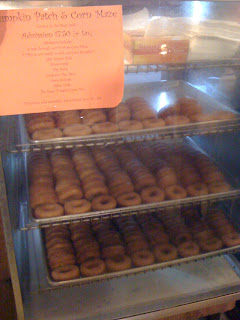 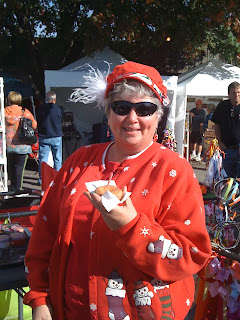 Our time at the Cider Fest was quickly over and we headed to the car, five donuts in hand. John stopped to share one with a guy directing traffic. It looked like he would need a little donut power to get through the day. By the time we left, there was a traffic jam.

Neither of us had tried cider donuts before so we do not have a comparison. John said they didn’t taste as apple-y as he had hoped, but were a very good cake donut with cinnamon and sugar. I thought they smelled delicious and would like a scented candle to match! We had such a great time at the Cider Fest I suspect it will become an annual tradition for us, like the thousands of other people rushing to get their once-a-year cider donut fix. 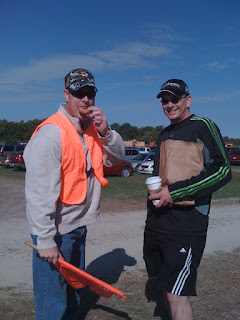