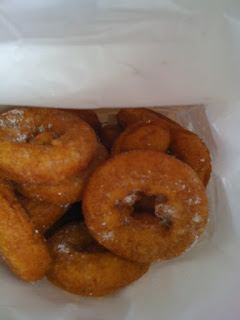 On a cool, windy weekday, Em and I went to Carolyn’s Country Cousins Pumpkin Patch in Liberty, MO. I had heard at least a gazillion radio advertisements for the pumpkin patch and they all mentioned pumpkin donuts. The pumpkin patch is just a few miles from my house so no excuse to miss this donut adventure!

Where I live, we get a twice-weekly local newspaper delivered to our doorstep/driveway/flowerbed whether we want it or not. This “service” costs $2.50 a month and we get a visit from the kids that deliver the paper every month in an attempt to collect the money. In exchange for paying them, we get a coupon to a local business. In the last couple of months, the coupon was a 2-for-1 for the pumpkin patch. I think this is the only time I have used one of the coupons and this one was valuable. Admission to the pumpkin patch is $8 per adult, a little pricey for two gals just trying to snag donuts.

When we arrived at the pumpkin patch, we noticed seven school buses in the parking lot. Apparently this is a super popular field trip destination! We paid our admission and entered the most elaborate pumpkin patch I have ever seen. Well, it’s not exactly a pumpkin patch, it’s more like a park loaded with stuff to do and they sell pumpkins. 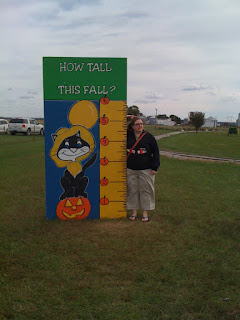 Em stopped for a photo at the “how tall” sign and then we headed to the train depot building to check out the goodies. A nice gentlemen in train engineer’s clothes had to let us in the building. It seems they were short handed and he was working in more than one place. The train depot/gift shop held a multitude of train themed items, polished rocks, microwave corn-on-the-cob and fudge. Yes, fudge…pumpkin fudge. We asked if the pumpkin fudge was any good and we were told it wasn’t really that good. No, not very good at all. Would we like a sample? Sneaky salesman! Of course it was good and the sample convinced us both to buy fudge.

I had hoped to catch the pig races at the pumpkin patch, but a corporate picnic the night before had left the pigs exhausted so they were given the day off. Instead we tried out the roping cow, the miniature corn maze, visited the farm animals in the barns and checked out the wide variety of pumpkins for sale. We still had not spotted donuts and asked where we would find them. OH–in the building with the big CLOSED sign out front! No wonder we couldn’t find the donuts! 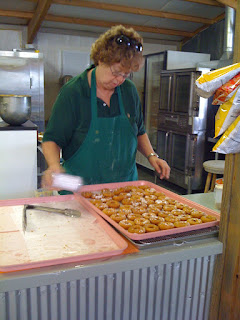 Inside the cafe building, the smell of fried pumpkin-y dough was mixed with the fragrance of spiced cider. YUM! We both bought donuts, I had a hot cider and Em had a cider slush. Oddly enough they also had tamales but we passed on that.

Em said the pumpkin donuts were among the top five donuts e-v-e-r. Seriously, she said that. Top Five! They were fluffy, tiny and very pumpkin-y. They somehow reminded me of the donuts fried up at the state fair, the kind that are really good right out of the fryer but not very good by the time you get the leftover donuts home to your husband.

Yeah, about that…I did take my bag of donuts home to John. He enjoyed them, but two hours had passed since they were fried so his level of enjoyment seemed less than Em’s. That didn’t stop him from eating all of them though. They were really that tasty.

Here’s my suggestion to you about the pumpkin donuts, go get them even if you don’t have a two-for-one coupon to get into the pumpkin patch. They are worth what they cost plus the $8 admission. 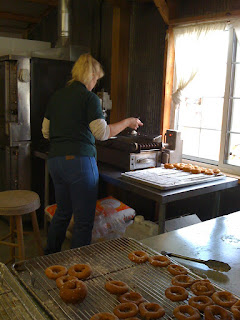