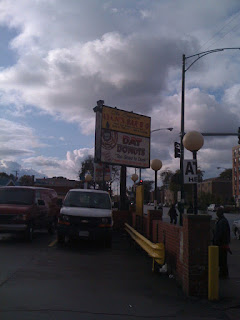 Somewhere around 30 donut adventures ago, I tried to find a locally-owned, non-chain donut shop in Chicago. I failed. Dunkin’ Donuts appeared on every street corner and I couldn’t find a single donut worthy of an adventure.

In the 8 months since, I have seen Dat Donut in Chicago mentioned in several lists of the nation’s top donut shops. I have seen no mention of the quality of the donuts, just the Big Dat Donut, a donut touted to be as big as your head. I really wanted to see such a donut!

On the way to Chicago, I encountered a college student who said she lived in South Chicago. It was my understanding Dat Donut was located in South Chicago so I asked if she had been there. She said she had never heard of it so I dug through my notes for the address. When I shared the address, the look on her face was one of disgust. She said, “Oh, that’s not South Chicago. That’s the ghetto. I live much further south.” Well, now I knew for sure I had to check out Dat Donut. 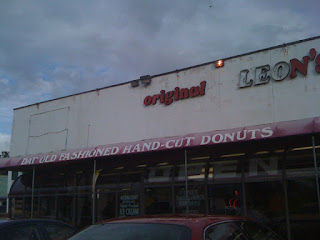 John and I headed to Dat Donut around 8 in the morning. It was a cold morning, even by Chicago standards, and rain was threatening. The drive from downtown Chicago to Dat Donut was a quick one, maybe 15 minutes. What first struck me about Dat Donut was the parking, FREE parking. After paying $43 to park at the hotel, it was nice to park for free anywhere, but especially at a donut shop. The neighborhood was a little run down with occasional sprinklings of new construction and strip malls. Certainly not the scary ghetto I was expecting.

Dat Donut is in the same building as a BBQ restaurant, Leon’s Bar-B-Que. Even though I am vegetarian, I love the smell of BBQ, but BBQ and donuts together? It was divine. And oddly enough, this is the second BBQ and donut establishment I have seen this year, the other in St. Petersburg, Florida. What’s the connection between donuts and BBQ?

We waited behind just a couple of folks to get our donuts. The Big Dat really is as big as your head and it’s only $2.59. John also got a couple of normal sized donuts, although he pointed out they were bigger than a Krispy Kreme. There were lots of donuts to admire in the case, including what initially looked like the typical twist, but instead it was more of a slip knot. In the short time it took for us to buy donuts, a line had formed. Dat Donut was hopping on a Saturday morning! 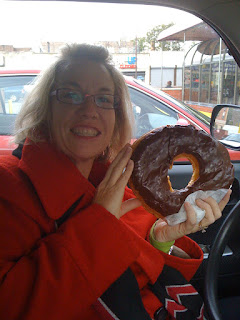 We headed out to the car with the intention of going toward the Art Institute of Chicago and having donuts within sight of the lake. We didn’t make it out of the parking lot before the bag was ripped open so we could get a better look at the Big Dat. It’s a serious donut. I guessed it was equivalent to about five donuts. I expected it to be unevenly cooked or somehow un-donut like on the inside, but it is instead a perfectly cooked donut biggie sized.

The cake donut John picked was quickly ranked as one of his favorites of the entire year. Even though I couldn’t eat it, I did get to smell it and even though this annoyed John, I poked it a bit. It was the most moist cake donut I’ve seen yet! John said the donuts were not greasy at all, which is always a good thing since that makes eating more than one easy.

We brought the Big Dat back to KC with us for further investigation. It weighed 373 grams, or about 13 ounces. I’m not a mathematician, but I think that makes it about equivalent to 5 chocolate frosted Krispy Kreme donuts, roughly 1,400 calories. This is a donut to share with a friend or two… 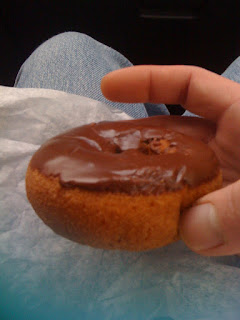