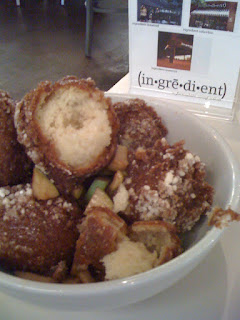 Recently I had an early lunch with a girlfriend at Ingredient in Leawood. I’ve had lunch and dinner there several times but had never tried breakfast. I don’t think I was even aware they offered breakfast but for some reason, while ordering lunch their breakfast menu caught my eye. Donut holes with a wide variety of toppings were listed on the menu. While enjoying lunch, I saw donut holes being delivered to another table and they looked divine. A return trip to breakfast was in order!

John and I ran in a 5k on a cold Sunday morning. The race ended just across the way from Ingredient. We walked over to Ingredient from the finish line, hoping not to be judged by our attire long enough to order donut holes. Not to worry–several other runners followed course and soon there were six tables of racers having breakfast. Good thing, as not many other folks had ventured out on a chilly Sunday morning.

The list of donut hole toppings was more than a dozen deep. It was difficult choosing just two. John chose cinnamon apples and a caramel drizzle but did pause before ordering to ask the cashier what her favorite two toppings were. She suggested the same two toppings. We both ordered Huevos Rancheros, one in a burrito and one plain, to add a little nutritional value to the donut holes. 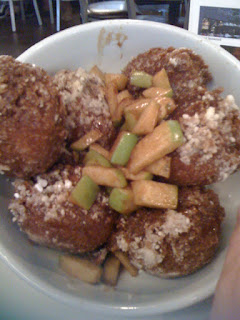 An order of donut holes is six and completely fills a very large bowl. Each donut hole is roughly the size of a baseball. They arrived with a light dusting of powdered sugar and a sizable quantity of cinnamon apples. They smelled like Autumn. John was able to eat just two of them in addition to his eggs. The remaining four were loaded into a box and brought home. Although these donut holes are sort of fritter-like, they reheated well for a late afternoon snack.

My breakfast was tasty, the accompanying potatoes were just right–slightly crispy on the outside but still soft on the inside. Not as good as a donut, but it worked. I would definitely have breakfast again at Ingredient, even if they didn’t offer donut holes.

And speaking of the donut holes, can you imagine the size of the donut? Maybe these folks need to get together with the folks at Dat Donut.

Ingredient is located at 11563 Ash Street in Leawood, Kansas.