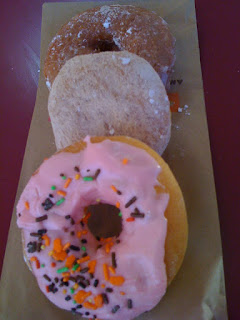 Instead of the usual numbered post title, I should have called this post “The Donut That Started It All.”

I grew up in a small town in Northwest Missouri. We didn’t have a donut shop, not even a Casey’s until I was in junior high. Donuts were a special treat. When we went to St. Joseph, we would stop at Dunkin Donuts at the corner of Frederick and the Belt. My entire life this particular donut shop has been a landmark.

My dad and I would sit at the counter and a lady in a pink dress with a white collar and patch pockets would come take our order. She would bring my dad a cup of coffee in a real diner mug and we would each get a donut. I always ordered the pink frosted donut with sprinkles. Sometimes I would get a fruit punch. I don’t recall it being a super tasty beverage but I was fascinated by the clear tank that held the punch, the kind that constantly circulated the liquid, spraying a fountain of articially colored liquid against the walls of the transparent tank. I would spin on the stools at the counter, my dad would grumble at me to stop. I usually would stop spinning when bribed with a couple of munchkins (donut holes) to take home. There was something magic about Dunkin Donuts. Maybe it was all of the pink and orange, maybe it was the combination of pink frosting with sprinkles (I’m still a sucker for that combination). Maybe it was time spent with my dad…maybe all of those things combined to make me love donuts. Whatever it was, the St. Joseph Dunkin Donuts is the foundation of my love of donuts. 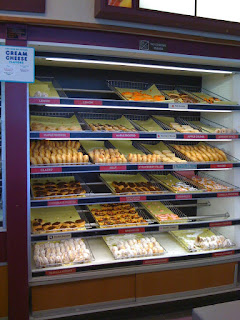 Recently Em and I went to the St. Joseph Dunkin Donuts. Unlike many small donut shops, DD has donuts all day and into the evening, so there was no morning rush. We headed out early in the afternoon but still found plenty of donuts to choose from. Em moved here from the Boston area and is accustomed to a DD being on every corner. When I first met Em, I think it took her all of 30 minutes to ask me if I knew of a DD closer than St. Joseph. We’ve since chatted numerous times about DD, our memories and the differences in how DD is perceived in the Midwest and the Northeast.

I picked one of those pink sprinkled numbers, a pumpkin cake and an apple filled spice donut to take home to John. Em got something I had never seen before, filled donut holes. That seems like a tedious job, filling donut holes. We both got fancy coffee drinks, far removed from the cup of black coffee my dad would have ordered. Em also got some sort of pumpkin muffin for later. You really can get everything pumpkin flavored at DD in the fall!

The counter at this DD is long gone, just a few tables are available for seating. We grabbed one and sat down to peruse our purchases. Within a few minutes, an older couple had sat down at the adjacent table. It was hard not to eavesdrop on their conversation and I heard the lady say a DD was soon opening in KC. I apologized for eavesdropping and asked if she could tell me where. She told me somewhere on 151st. She also shared with us that there used to be many DDs in KC. I didn’t recall any, but was perhaps more familiar with St. Joseph. Her husband said he thought the DD had been in St. Joseph for 50 years or so. I can recall it being there for 30 years but was surprised to hear 50.

Em shared with me her childhood memories of DD, which included visits to the drive-thru. I have not been to a DD with a drive-thru. She recalled going with her dad and sister to the drive-thru and getting either one donut or two munchkins. After seeing a grandfather loudly haggle with his two whining grandsons while we were at DD, Em wondered if going to the drive-thru instead of inside the donut shop was a way to keep her and her sister from asking for more donuts or debating which ones to get. I can see the drive-thru assisting with parental control.

This was an enjoyable donut adventure, a trip down memory lane and a chance for me to really think about why I love donuts. It really has been all about the experience my whole life, not just about the donut. And it took me 46 weeks to figure that out!

As of today, Kansas City is the home of a brand new Dunkin Donuts. Today was their grand opening, complete with an appearance by George Brett. Em and I chatted about going but neither of us could find the time in our schedules. We joked about open our own DD, a major career change for both of us. You would think two hard-core donut girls would be the first in line at the grand opening, but we weren’t. In fact, neither of us made it there on the first day. For me, I think my lack of excitement is in direct relation to our area’s franchisee announcing plans to open another DD location just a few blocks from my favorite independent donut shop. It’s all about the experience with me and I don’t think we need a whole bunch of donut shops that offer the same plastic experience regardless of location. Now go on, go buy a donut this week from your local donut shop. It’s sure to make the world a happier place.