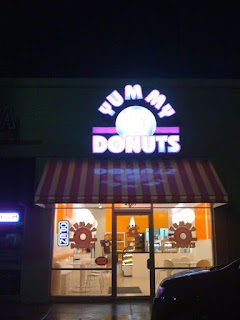 Thirty-six hours in Dallas afforded me the opportunity to visit YUMMY Donuts, a trendy donut shop mentioned to me by Jenny of Making a Foodie. As always, Jenny gave a great recommendation! Being in Dallas for such a short visit made it challenging to get everything done on my wish list. Dinner at Spiral Diner, cupcakes at Sprinkles, an adventure duathlon, shopping at REI…but there had to be time for donuts! And are there ever donuts in Dallas. On the short drive from the hotel to Sprinkles, I counted SIX locally owned/non-chain donut shops. Dallas would be a great town for a donut crawl!

My schedule in Dallas wasn’t conducive to acquiring donuts. I arrived late at night, had to be up early the next morning for the duathlon and by the time the race was over, the donut shops were closed. One last chance to get donuts remained. It would have to be early the next morning and it would also make me cut it close to catch my flight home…but I was getting some Texas donuts!

I headed out in the early morning darkness with rain pouring down to find YUMMY. I arrived a few minutes before their posted opening time of 6. As I pulled into the parking space, the lady inside washing windows smiled and waved, inviting me in even though it wasn’t quite 6 yet. Yay!

YUMMY is a cute donut shop. Bright orange walls, crisp modern furnishings…everything I see often at cupcake bakeries but rarely at donut shops. Jenny had used the word “trendy” to describe YUMMY and that’s a great description. These folks have done to donuts what has been overdone with cupcakes. Donuts really are the next cupcake, y’all. Prepare to be de-throned, cupcake queen. Donuts have arrived! 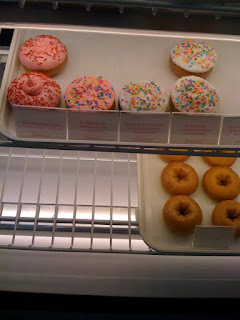 The selection in the bakery case was extensive. I immediately noticed that many of the donuts had cute little swirls of frosting in hole area, making them look like a short cupcake. Adorable! There were many flavors from birthday cake to mint oreos, lemon to a traditional raised glazed donut. While the flavor selection wasn’t extensive, the donuts were not displayed in massive quantities like many donut shops. Instead, they were artfully arranged, each flavor labeled with only one or two of each on display. Again, very cupcake-y. That’s not a bad thing.

Speaking of that raised glazed donut, the gal behind the counter insisted that I should try one. I had read on-line reviews of YUMMY, some not so good, and wasn’t holding out for overly delicious donuts, especially not a glazed donut. While it is the most basic of donuts, I think it may be one of the hardest to get right. But YUMMY has done it. I gave the donut to John and he said it was one of the best ever. Seriously, EVER. It was light, fluffy and melt-in-your-mouth kind of good, like a warm Krispy Kreme only this one wasn’t warm. Wow.

I selected a dozen donuts, no two the same flavor, but easily could have picked two full dozen. It was a challenge to narrow it down to only 12. Donuts in hand, I headed off to the airport. It was still dark and still pouring rain but already a bright day after a terrific visit to a donut shop. 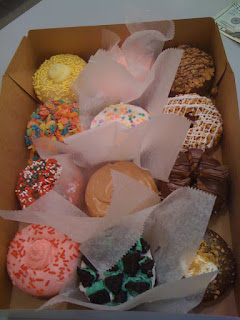 On the ground in KC just 2 1/2 hours after buying donuts, it was time for donut tasting to begin. Em came over for an early lunch of donuts. We split donuts into halves, then quarters so more sharing could be done. Em quickly declared any donut topped with cookies a great thing. Another donut friend, Sheila, can’t stop talking about the lemon donut. Lemon is a trick flavor according to Sheila. Some lemon treats taste like Pledge, some taste too sweet and artificial. Sheila declared YUMMY’s lemon donut the perfect lemon sweet treat. I’ve been bringing lemon-y treats to Sheila for as long as I have known her (too many years) and have never heard her say any of them approached perfect. Go YUMMY!

While at YUMMY, I commented that their donuts were very pretty. I could tell they were decorated with lots of loving care. Each Oreo topped donut had a nice balance of cookie pieces on top. The Fruity Pebble topped donuts were evenly covered with sugar-y bites of cereal. The S’more donut had an even distribution of graham cracker crumbs across the top. The gal behind the counter told me they come in at 3 in the morning to finish decorating the donuts. She said it is time-consuming, but people seem to like it. She’s right, or at least as far as this group of Midwestern donut tasters are concerned. We like what you are doing with donuts, YUMMY.

YUMMY donuts is located at 4355 Lovers Lane in Dallas, TX. 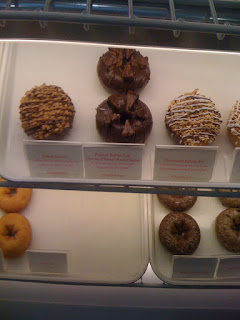 I am down to the final five donut adventures to complete my 52 Donuts journey. If you’ve got recommendations, send them my way in a hurry. I can’t believe the year is almost over! 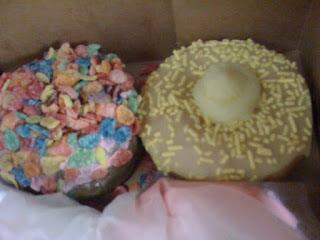 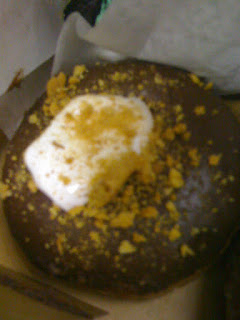