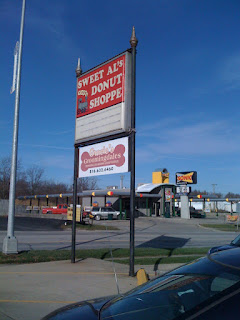 I grew up just 13 miles from Sweet Al’s in Cameron, Missouri and it has been open for business since I was an itty bitty, however I had never been there. A follower of this blog had suggested Sweet Al’s and that’s good enough for me to drive an hour north to Cameron, Missouri!

A car club that I belong to joined me for the drive to Sweet Al’s. We took the backroads from KC and made a quick stop at the Shatto Dairy farm store to pick up fresh milk to go with our donuts. I got a pint of strawberry milk and discovered their pint bottles fit perfectly into my car’s cupholder. Now I need to modify a bottle cap for a straw and I’ll be set!

Parking is tight at Sweet Al’s, well, maybe if 7 or 8 cars arrive at the same time. We parked next door at the bank and headed into a great donut shop, all decked out with railroad memorabilia including a train that runs around the entire shop. Much of the memorabilia was authentic train parts, lanterns and signals. A train buff would have fun looking around here.

The donut selection was huge, plenty to pick from. One of the gals from the car club commented that they had the best raised glazed donut she has ever had. Someone else said their apple fritter was tasty. No one had anything bad to say, except that the fritters were really sweet but not so sweet that an entire one couldn’t be consumed by one person. 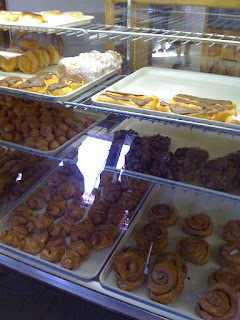 There is a bit of seating inside Sweet Al’s and the staff went out of their way to rearrange furniture so our large group could all sit together. The old guys having coffee had fun teasing us about our little cars and asking if they could join us for the ride in their “pick ’em up trucks.” It was a down-home donut adventure, complete with yummy donuts.

Sweet Al’s is located at 808 N. Walnut Street in Cameron, MO. They are closed on Sundays.