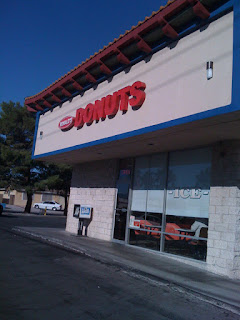 I was so hopeful I would have the opportunity to visit Ronald’s Donuts in Las Vegas during the 52 Donuts journey and work gave me the chance. Ronald’s is high on my list of donut shops ANYWHERE and it certainly deserves to have it’s own week on my blog!

Ronald’s is in a strip mall not far from the Strip, a couple of miles maybe. I’ve heard the area referred to as China Town. It’s a tiny little place with maybe 5 or 6 booths and no fancy coffees, just simple brewed coffee. They sell cigarettes at one end of the counter. They don’t accept credit cards, cash only. Ronald’s looks like a traditional, locally owned donut shop.

Ronald’s is owned by Henry and Janie Kang, who are Buddhists. The top two shelves of their bakery cases are filled with vegan donuts. Not the dreadful, dried out, crumbly cake donuts that usually carry the vegan label. Nope, these are some of the best donuts you will ever eat, vegan or otherwise. They have cake and raised vegan donuts, cream-filled, glazed, sugar-coated, and fruit-filled vegan donuts. Just about any variety of donut you can get in a “regular” donut shop, you can get vegan-ized at Ronald’s. How they do it is beyond me but they are AMAZING. I would like the non-dairy Bavarian cream filling by the gallon, please. 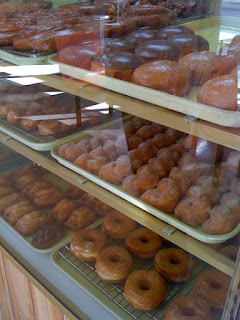 While Ronald’s has a huge national following among vegans, they also have a large local following who could care less if the donuts are vegan. Folks just know their donuts are good. Ronald’s repeatedly wins the “best donut in town” awards. I’ve seen cops, constructions workers, guys in suits….pretty much the same mix of people you see at any donut shop. And occasionally someone will ask for the vegan donuts, but most people order just like they would at any donut shop.

I was in Vegas to work and in addition to having a coffee while John had a few donuts at Ronald’s, I bought an assortment of donuts to share with the good people we were working with. I’ve mentioned before that I work with an interesting mix of people. This trip included working with our agent Mark (who I mentioned during our Kentucky donut adventures) and his lovely wife and son, a 10-foot tall robot, a husband-wife magician and escape artist team, a monkey and his handler, a children’s interactive game show host, a variety artist, a hypnotist, Lambchop, BMX legend Woody Itson, a comedy juggler and at least 100 other types of ran-away-and-joined-the-circus folks. And every one of us was there hustling for more work in the upcoming year.

I share the hustle part for this reason. I took a pink box of Ronald’s amazing donuts to share because I like to share donuts. Because everyone loves donuts (admit it, you do!). Because donuts are the foundation of shared food and chatter in America. This is what I shared: 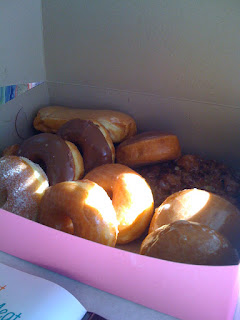 The next day, a hypnotist looking for representation by the agency that represents me brought donuts. From Winchell’s. They were the saddest donuts I have ever seen. I have a couple of suggestions for Mr. Hypnotist. First, don’t ever bring donuts in if I have already been there. You’ll lose to Donut Girl every time. Second, Winchell’s? Seriously–Winchell’s? If you want to impress folks with donuts, go the extra mile and get good ones. Treat them to a donut as unique as you want them to believe your act is. Or not. This is the mess from Winchell’s: 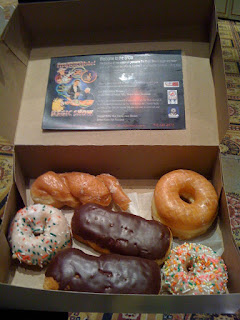 John rounded up a really great Elvis impersonator and asked if he would walk to the far end of a convention center to share a donut and have his picture taken with me. What a nice guy–he agreed! John found a terrific Elvis impersonator for this dream donut–Charlie Franks. We shared a laugh about Elvis eating a donut and my ode to Graceland with my animal-print jacket. No other word for this except FUN. 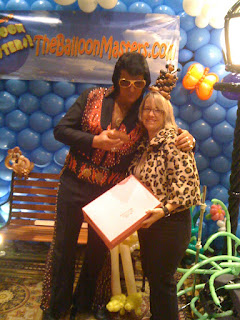 On to my next dream donut, one with a cop. This wasn’t what I had in envisioned, it was better! I noticed a Barney Fife impersonator browsing at a tradeshow booth–a booth that sells badges and patches to law enforcement officers. I didn’t want to interrupt his shopping, but did ask if he would join me for a donut and a photo when he was done. Well! He was immediately done! He took me by the hand and drug me across the convention center to his trade show booth. He insisted to the gal working the booth that she would get his camera out RIGHT NOW! This guy went from mellow shopper to Barney Fife in 0.5 seconds. He was suddenly ON and boy, was he entertaining. And he even had the bullet in his pocket. The spectacle drew a large crowd, everyone digging for their phones and cameras to take pictures of Barney having a donut. 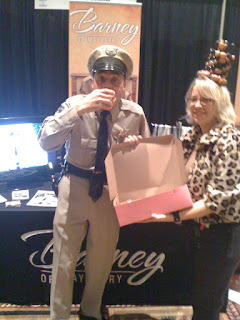 I had hoped to visit one other donut shop while in Vegas. After working for several days, I stuck around for an additional 4 days to visit friends and run in the Las Vegas Marathon. While driving the route the night before the race, I noticed a small Vietnamese donut shop. While it hasn’t been high on my dream donuts list, I did hope to visit a Vietnamese donut shop at some point this year. I’ve thought about it since bumping into the guy from Dallas while buying donuts atop Pikes Peak. There seem to be a large number of Vietnamese donut shops in some cities and I wanted to check it out. Of course it was closed in the evening but I thought about it again right before the marathon started and asked John if he had any cash. He gave me $3, I tucked it in my running gear and headed off. I was willing to add a few minutes to my race time to stop for a donut and then carry it the rest of the way to the finish. Much to my disappointment, the route went past the donut shop but on the opposite side of the street, which meant I would have had to dodge four lanes of traffic to get there. I decided to skip it, but I could smell it. Ahhhh….

That donut shop is located on the far north end of the Strip. It is also near the turn-around point of the marathon route and a good viewing area for family members of runners. John and my training partner’s husband Kirk planned to catch up with me in that area and maybe I would toss a bag of donuts at them. They arrived in that area and never caught site of me. Not thinking that could be because I was having an exceptionally fast race, they instead assumed I was delayed at the donut shop, which they couldn’t immediately locate. Kirk found the nearest police officer patroling the race course and said to him, “I don’t want you to think I’m being smart with you, but where is the donut shop?” And the cop had no idea. Stereotype dispelled.

A final word on vegan donuts: In February, I went to a fair amount of trouble to get the much-touted vegan donuts from Dee’s in Los Angeles. They were amazing donuts. Within a couple of months, the vegan community was in an uproar about Dee’s, accusing her baking equipment of being filthy and the worst accusation was that her donuts weren’t really vegan, specifically the sprinkles she used. I don’t think Dee’s exists anymore and I feel bad for sharing a non-vegan donut with my vegan friend G. Ronald’s has passed much scrutiny from the vegan community, as shown here. It’s the real vegan deal here.

Here are a few more photos of donuts from Ronald’s. I love that place. Perhaps the final thing on my dream donut list would be a gluten-free donut at Ronald’s. That would be heaven. 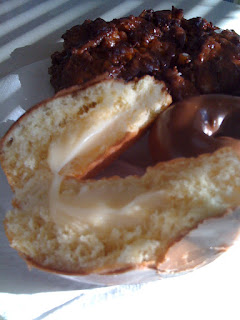 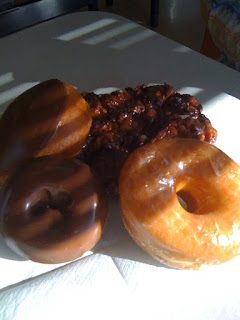 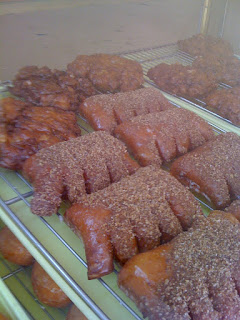