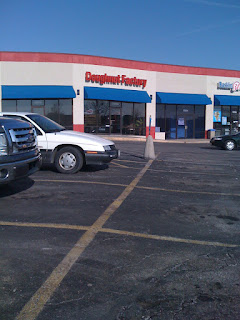 A follower of my blog, Quentin, nearly insisted that I visit the Doughnut Factory in Olathe. In fact, he mentioned it TWICE. He even said they sometimes have warm donuts in the AFTERNOON. Right. He further boasted that they make donuts the old fashioned way. Uh huh. Sure. Of course they do, Quentin.

Well, Quentin was right. Doughnut Factory is a gem. I can’t believe it took fifty weeks to get there.

Em and I headed to Doughnut Factory late in the morning. She had a tennis match nearby in the early afternoon so instead of making two trips south, we carpooled at an hour more suitable for an early lunch than fresh donuts. We pulled into the strip mall where the trusty GPS said we would find the Doughnut Factory. I’m not overly familiar with Olathe, but recall there used to be a quirky store in that strip called the Stupid Shop. I bought Fart Putty there many years ago and had a great time with it tormenting a waitress at the nearby Joe’s Crabshack. I wish I could say I’ve since grown up but can’t. Oh yeah, donuts…we were talking about donuts. The Doughnut Factory is in a strip mall, the same area as Oklahoma Joe’s BBQ and the KC BBQ shop, along with other businesses I can’t recall. That happens when I see a donut sign.

Em pointed out that she liked the place already because they had spelled “doughnut” right. Along with the “is it a donut without a hole?” disagreement, add this one to our list. I obviously prefer the short version, donut, but either gets the point across. It just seems donut would be more economical, especially when it comes to storefront signage. 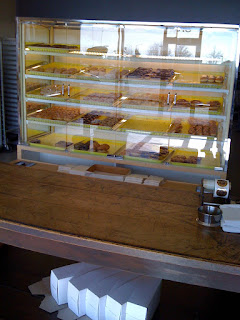 We headed in, expecting to find a nearly empty donut case. Instead, there was plenty to pick from. The nice guy behind the counter greeted us warmly. As always, I asked what his favorite donut was and he said it was the maple long john. Another one of those regional names–sometimes it is called a maple long john but everywhere I have been from St. Louis east refers to it as a maple bar. I bought the maple bar, a pecan roll, a chocolate glazed old-fashioned and a plain raised glazed donut. I can’t even tell you what Em got, I was too busy admiring what must have been a full pound of chopped pecans on top of the chocolate frosted pecan roll. Wow.

Em and I sat at the only table in the shop, catching up from the holiday craziness. Em had a couple of donuts (what great carb loading for tennis!) and I had a diet soda. The sun was beaming through the window. It would have been the perfect place for a cat nap! Em was sitting with her back to the window and could see into the kitchen. She said, “Check that out! He’s making donuts!” Sure enough, the guy in the back was using a hand crank machine that formed donuts and within minutes, the shop was filled with the glorious aroma of freshly fried donuts. Yum. A quick look at my watch revealed it was NOON. Freshly fried circles of dough at noon. Unheard of, except at Krispy Kreme. Doughnut Factory is no Krispy Kreme. There is nothing that resembles a factory at this donut shop, only handmade donuts. 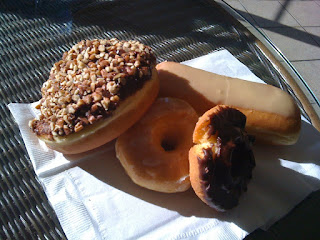 The guy behind the counter (I suspect he is the son or grandson of the original owner but didn’t get the chance to ask) told me the Doughnut Factory has been in business for 30 years, 10 at the Olathe location. There other location is in Merriam and I’ve passed it many times but never stopped in. I will now. The walls were filled with newspaper stories from years past. They were a treat for two donut fiends to read. A small bulletin board was covered with local announcements and a collection of thank you cards from local groups the Doughnut Shop had supported. There was an adorable donut made of construction paper, colored with crayons and adorned with pompon sprinkles from the kids at the YMCA. Everything about the Doughnut Factory screamed old-fashioned donut shop. All it needed were a couple of old men drinking stale coffee and telling war stories. And maybe a location other than a suburban strip mall. But it really is the real deal. 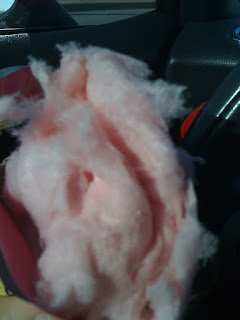 I took my bag of donuts and headed to Em’s racquet club, devouring my Sweet of the Week in the car. My gluten-free sweet was a bag of cherry vanilla cotton candy. It was labeled organic. Really, it was. At some point, I said to Em that I might as well pour sugar directly into my mouth and avoid the fluff and sticky fingers. But it was low in calories and fat, so it sort of worked and I had no guilt. I would have rather had a donut. Would someone please start making good gluten-free donuts and sell them at a donut shop, rather than in a box in the freezer section of a health food store? Please?!?

The bag of donuts quickly landed on John’s desk. Even though it was Sunday, he was sitting at the computer finishing up year-end work. He commented that the maple long john was incredibly light. I picked it up and couldn’t believe how light it was–very fluffy! I don’t think I’ve ever felt a raised donut that was quite as light. That goes along with the very minimal grease staining on the bag. The pecan roll was spun in a circular fashion, kinda like a cinnamon roll but there was no cinnamon filling, just oodles of chocolate frosting and all of those pecans I mentioned earlier. John gave their donuts a thumbs up and said he would definitely go there again. Since he has been forced to eat many donuts in the past year, a mention of going there again means a lot. 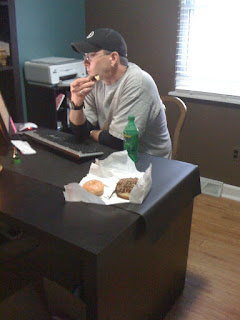 Doughnut Factory is located at 11916 South Strang Line Road in Olathe, KS. The original location is located at 9408 Johnson Drive in Merriam, KS. Please support these guys. They have seen many donut chains come and most of them go in 30 years. Let’s help them continue that tradition!

A BIG thanks to Quentin for this recommendation. You were right, it was terrific to include them in the 52 Donuts journey!