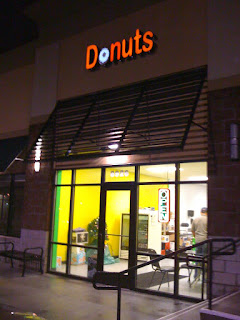 As my donut adventures near an end, I wanted to find a donut shop that represents what I have come to love most about donut shops: locally owned, full of character and offering donuts made with love. That’s not the adventure I have to share.

I first visited this donut shop way back in July. Em had noticed it in a new shopping area and said a banner was hanging on the outside that just said “DONUTS.” I stopped by and found it not yet open for business. I’ve since been by a few times, every time peering in the door to see large bags of donut flour stacked on the floor, everything looking like they could open any day. My friends Dave and Charlotte live nearby and I asked them everytime I saw them if the new donut place was open. It seemed like it took forever for this place to get up and running!

Finally! In the last week my friend CD asked if I had been there yet. He lives near the owner and said she had relocated her shop from Platte City and had some issues with the move and staffing but was officially open. I wanted to be behind this place. It’s a women-owned business, obviously someone passionate about donuts if she went to the hassle of relocating instead of throwing the towel in…both positive indications to me. I was excited to check this place out!

Here’s where I start making excuses for the owner of this shop. I went there on Christmas Eve. The only employee in the store was less than enthused to be there, but maybe that was because of the holiday or the cold rainy weather. Maybe the owner wasn’t there working because of the holiday. Maybe the donuts were horrible because of a problem with equipment…lots of maybes floated through my head because I really wanted to like this place. I wanted to share with you a positive experience, a glimmer of hope that new non-chain donut places can pop up and provide an amazing experience that puts those nasty chains to shame. Sigh.

Enough with the excuse making and on to the donut buying. There were no raised glazed donuts, mostly cake donuts. The only raised donuts were long johns, twists and bismarks, which were un-filled but the guy behind the counter did offer to fill them. The cake donuts were the smallest I have seen outside of someplace offering mini donuts. They were skinny with a large hole. I don’t want to start comparing hole to donut ratio but these were very awkwardly shaped. The word anemic came to mind. They were not the thick, pudgy shape of most cake donuts. 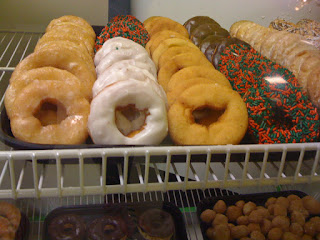 And then there were apple fritters the size of your head. This place is to apple fritters what Dat Donut in Chicago is to raised glazed donuts. The fritter completely filled a standard dozen donut box. It weighed a pound and a half. HUGE. Getting the fritter out of the bakery case proved challenging for the guy behind the counter, as the ones in the bakery case were all stuck together. He got one off of the rack in the back, which was covered with donuts, some varieties not present in the case. I wish I could have seen what they all were. The only raised donut I got was the chocolate peanut butter long john and I was advised it would be in a separate sack since they it was, “a huge mess.” 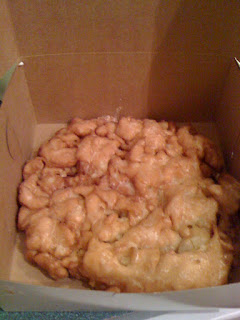 I brought the donuts home and John took a bite of the blueberry cake one first. He immediately asked if I had bought day-olds. Umm…not on purpose. He didn’t think they tasted fresh. He ate part of the enormous apple fritter and nibbled on the donuts but didn’t seem too enthused about any of them. As of this morning, the apple fritter box is still sitting on top of the frig, un-eaten donuts and a large part of the fritter growing even more stale. I can’t recall donuts ever sitting around this house for that long. But I’ll make a few more excuses for the Donut Place. Maybe it’s because of all of the other Christmas goodies around here. Maybe it’s donut burn-out. Maybe they just weren’t that great.

Only one week remains and I hope to end with a super old school donut shop experience. I’ve got a place in mind and am hoping for good weather and clear roads.

The Donut Place is located near Five Guys and Firehouse Subs in the 8900 block of Skyview Avenue in Kansas City, MO. The signage does not say “The Donut Place,” it just says DONUTS. I found the name on a flyer posted inside the store. A steady stream of folks was coming in on Christmas Eve. I hope I just caught them on a bad day. 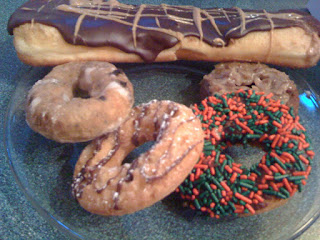