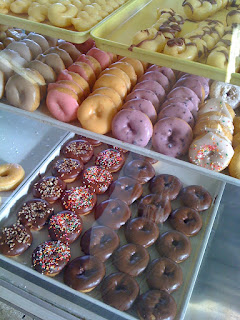 The final installment in the 52 Donuts journey needed to be spectacular. I considered many possibilities: an international donut excursion, a trip to the famed Voodoo donuts, a tour of a commercial donut facility OR a trip to Springfield! DOH!

I asked my friend Sheila to accompany me on this journey. She has been with me on other donut adventures and has many times gotten me into ridiculous trouble-filled adventures, so much so that we refer to our trips together as “Thelma and Louise-ing.” She would tell you I’m the instigator of the debauchery and I’ll argue until she admits the truth. I knew Sheila would be a fun companion for the journey’s end.

We left early on Sunday morning, two days after Christmas with over a foot of snow on the ground. It was still snowing and the wind was chilly. Between my house and Sheila’s house, the highway was in pretty good condition, almost two lanes were visible. The Missouri Department of Transportation’s website assured me the highway was clear past Harrisonville. I was feeling pretty confident. Then I got close to Sheila’s house and the highway was reduced to a cowpath. It was slow going for the next many miles, but never once did either of us make mention of turning back. There would be no turning back…there would be donuts! 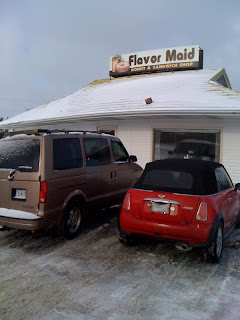 The roads started to clear as we approached Clinton, Missouri. We turned off of the highway for our first donut visit, Flavor Maid Donuts. What a find! The girl behind the counter said they had been there for more than 20 years, but she had only worked there a little over a year. We picked several goodies from the bakery case, including what looked like a glazed long john that had a small path cut lengthwise down the donut, filled with fruit jelly. We asked what they called that particular creation and the girl said she had no idea but if she were to name it, she would call it a fruit boat. Fruit boat it is. Sheila chose raspberry and declared the fruit boat divine, complete with seeds in the raspberry jelly. She also said it was one of the best donuts she has had in many years. There were a couple of tables inside Flavor Maid and as is required of all good old school donut shops, three old fellas were discussing local politics over steaming cups of coffee and donuts. 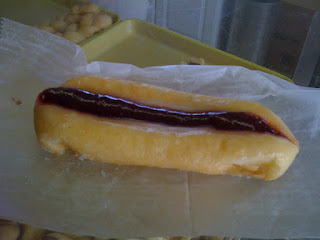 As we were pulling out of Flavor Maid, I noticed a large flock of black birds dining on something in the snow. I stopped to have a look and discovered it was a mound of donuts. The birds were eating day old donuts in the driveway shared by Flavor Maid and the grain elevator. 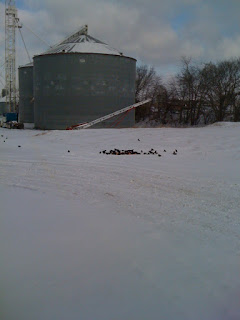 Heading on to Springfield, our next stop was in Bolivar, Missouri at the Woods Supermarket. I had solicited donut input from three friends (Cathy, Sharon and Mark) who either live nearby or grew up in the area. One said Wal-Mart was about it, two suggested Woods bakery. Woods it was. No matter how desperate the donut search has been at times, I refuse to go to Wal-Mart. I had been warned that Bolivar is a small town, but quickly discovered my definition of small town and other folks definition do not match. Bolivar had plenty of fast food offerings and Woods supermarket was surprisingly large. They even have a fancy coffee counter with a barista! 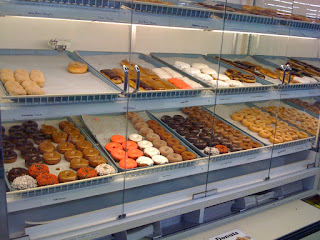 We headed to the bakery and found what I expected to find, the perfectly shaped donuts that often indicate a par-baked donut. Em and I got a great explanation back in April of the par-baked donut process from a new grocery store in our ‘burb and it convinced me to not totally rule out par-baked donuts. They are received frozen by the store, then thawed in a proofing box, quickly fried or baked depending on the variety and then “finished” by the store. The finishing stage, frosting, filling and glaze, are all applied in the store, so they sort of make the donuts. Those are the kind of donuts Sheila and I discovered at Woods. They even had some of the day-glo frosting colors I’ve come to expect at grocery store bakeries. I bought a twist and an apple fritter to take home.

While walking out of the bakery department, Sheila commented that they had Krispy Kreme donuts in addition to their own. We stopped to see what was available and noticed Krispy Kreme fruit pies (fried pies) and Krispy Kreme cupcakes. I’ve never seen those before. 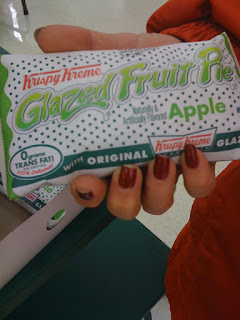 On to Springfield we headed. Time was becoming critical at this point, as we had heard the most recommended donut shop in Springfield never had a good selection by late morning. With the roads absolutely clear and just an occasional flurry falling, we made great time getting into Springfield and quickly located St. George Donuts. We went to the St. George location next door to a BBQ establishment, marking the third time this year I have had the combined aromas of smoked meat and freshly fried donuts in my system. For whatever reason, it works! Hmmm….maybe a smoked donut!

The first bakery case was filled with full pound sticks of butter and a mixing bowl. The second case had a fairly extensive selection of donuts and muffins. We chose a few donuts, including a beautiful toasted coconut cake donut, and an egg nog muffin. The lady behind the counter told us St. George is definitely the only donut place worth visiting in Springfield (gotta love a loyal employee) and also suggested a Chinese restaurant to us. Chinese food and donuts–now there’s another combination that needs to be tested. Maybe. And if it were to best tested, it couldn’t be with those little donut hole things at the Chinese buffet, which are insanely easy to make with refrigerator biscuits. 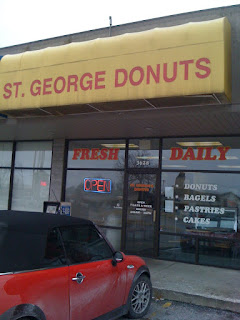 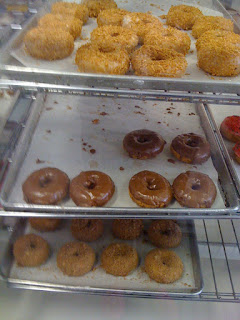 St. George Donuts was a fun place to visit, but not to linger. We headed down the road to the enormous Bass Pro Shop. We spent the next 30 minutes terrorizing the taxidermied critters with a glazed donut from Flavor Maid. Nothing will get you asked to leave redneck mecca quicker than attempting to feed a 10 foot tall dead, stuffed bear a yummy donut. And claiming that the bear looked hungry will get you nowhere.

Not one to waste a perfectly good day in any town, I registered myself for a 1/2 marathon in Springfield that began at 2 in the afternoon. Sheila stood by while I trudged along in the cold, waited patiently for me while the snow turned to sleet and the windchill declined to near zero. I didn’t worry too much about her, as she had enough donuts in the car to sustain herself for awhile.

With the 1/2 marathon finished and the last of the donut stops behind me, Sheila and I headed off to find the nearest drinking establishment to celebrate the marathon finish and the end of the donut journey. We stopped at a typical sports bar in a typical strip mall. The folks working there were anything but typical and prepared a terrific meal for me–a fried egg, grilled veggies and French fries. Springfield proved to be more than Anytown, Anywhere, USA. It proved to be a great place to finish this journey and start planning for next year.

Thanks to all of you for tagging along with me on this year-long adventure. It was originally about the donuts but turned out to be so much more. 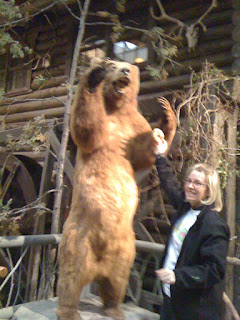 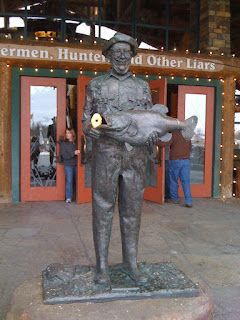 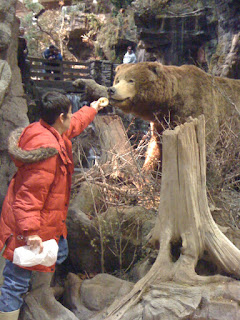