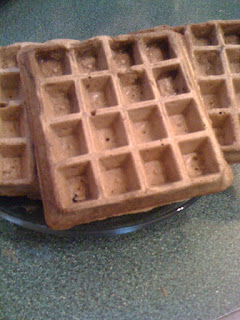 I don’t plan to make a habit of posting non-sweet goodies here, but tonight’s dinner was so tasty I wanted to share.

A Big Boss Grill landed on my doorstep this week. I am not an infomercial shopper, really I’m not, but I saw the commercial for this one in the middle of the night and was sucked in the minute they said DONUT PLATE. While I haven’t tried it for donuts yet (it’s coming, I promise), I have used the sandwich plate and the waffle plate. Tonight it was used to make vegan, gluten-free, buckwheat waffles.

I like toaster waffles a little too much, especially the gluten-free variety from Trader Joe’s. They contain a few ingredients I am trying to avoid (refined sugar and dairy) so I tried my hand at making my own waffles that could be frozen and re-heated in the toaster. Here’s the recipe:

Mix soymilk and apple cider vinegar, set aside allowing milk to curdle. This is the equivalent of buttermilk.

Combine all dry ingredients, then incorporate the wet ingredients, whisk until well mixed. Pour a scant 1/2 cup of waffle batter into each side of the waffle iron (if using one similar in size to the Big Boss Grill), cook for 5 minutes. The recipe made 8 waffles in my grill.

The finished waffles fit well in a wide-slice toaster and are much heftier than a standard toaster waffle. If you are a calorie counter, by my figuring these are approximately 186 calories each using the brands in my cupboard. (You should do your own recipe analysis based on your ingredients AND your math, as numbers are not my strong suit.)

I hope you enjoy these as much as I did!