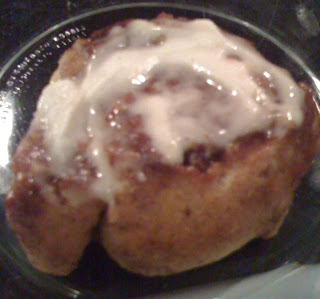 I will start by acknowledging the great difficulty I have experienced with gluten-free yeast breads. I tried making a nice crusty loaf to go with pasta, it was a horrible failure. I tried making dinner rolls for the holidays, they were an embarrassment. But not one to give up easily, I decided to try cinnamon rolls.

While perusing gluten-free cinnamon roll recipes, I came across this one from Gluten-Free Girl. Shauna’s book, Gluten-Free Girl, was the second book I read after being diagnosed with gluten-intolerance (the first being that cookbook, the one I mention often because it is that good) and she continues to inspire me everyday with her blog and tweets. She is living a very satisfying epicurean lifestyle without gluten. I am so thankful to have happened upon her book!

So back to the recipe, I decided I would give Gluten-Free Girl’s cinnamon roll recipe a try. I am very interested in baking by weight as opposed to measuring. This recipe offers both options however I chose to weigh my dry ingredients. I made minimal substitutions, using soy milk powder for the milk powder, Earth Balance for the butter and Tofutti’s Better Than Cream Cheese for the cream cheese. 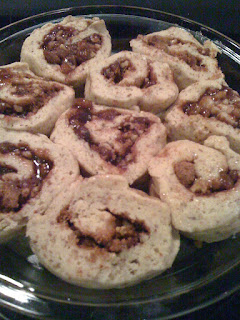 Midway through mixing up the recipe, it struck me that I had never made cinnamon rolls before, gluten-free or otherwise. Eaten many, yes, but never baked them myself. I was a little apprehensive about rolling out the dough, then rolling it back up with the filling and then cutting it into individual rolls. Shauna’s instructions were so easy to follow and I only got one questioning look from my hubby while searching the medicine cabinets for a non-flavored dental floss, which has now been procured and resides in the kitchen.

One thing I wanted to share with you is the minimal browning I seem to get with gluten-free baked goods. And I don’t think I am the only one challenged by this, if the gluten-free pizzas I get when eating at Spin! are any indication. There seems to be a very fine line between a tinge of browning and burnt with gluten-free baked goods. If I see a touch of that beautiful brown color I know from gluten breads and the baking time is close to the recipe’s suggested baking time, I pull them out immediately. Otherwise, I end up with something black instead of golden brown. 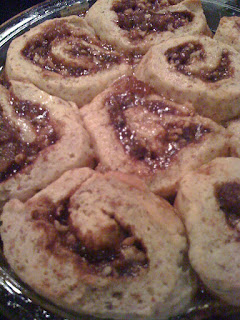 (This photo shows the rolls after baking)

After removing the rolls from the oven and flipping them out onto a plate, I briefly considered not frosting them at all–they were beautiful! The house was filled with a delicious aroma, no different than that emitted by gluten-filled cinnamon rolls. And the rolls looked better than I had hoped for on my first attempt!

I did frost the rolls, after waiting and waiting and waiting for them to come to room temperature. It seemed to take forever–I wanted to dig into these immediately! My patience was rewarded. The cinnamon rolls were by far my best experience with gluten-free yeast bread and were as good, perhaps even better, than any cinnamon roll I have had before.

Even though it is early on in the 52 Sweets adventure, I have been challenged by baking something only once. “When I make this again, I will…” or “Next time, I will add more of this…” Instead, I’ve got one shot at making everything this year. This week was the perfect example of making something only once and being very pleased with it. No need for a do-over, an ingredient adjustment or a change in cookware. I wasn’t sure about including golden raisins in cinnamon rolls and it turned out to be one of my favorite ingredients. I really cannot think of a single adjustment I would make, other than an opportunity to make these again. Simply divine. 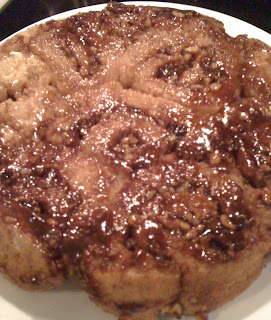 This week’s Sweet Friend is my hubby, John. Since the cinnamon rolls were baked on Valentine’s Day, I couldn’t think of a more appropriate person to share them with than my best friend. If we were to count half anniversaries, Valentine’s Day would mark our 14 1/2 year wedding anniversary.

John has been very patient during my transition to gluten-free. He has tried everything I have attempted to make and has never once said, “This tastes funny,” even though many times it didn’t just taste funny, it was awful. He ate more donuts than I could possibly count during the 52 Donuts adventure, filling in for me as taste-tester many times in the last six months of the project. I haven’t seen him with a donut since.

Not only am I married to this amazing guy, I also work with him. He pursues his artistry at a level I rarely see and is never stymied by the challenges of working with a non-traditional medium. His commitment to working and re-working a sculpture until it is perfect inspires me.

I won’t disclose all the mooshy details, but I will share that I met John while I was in high school but we didn’t attend the same high school. We worked at the same place during the Summer, but not in the same department. We went away to college, but not the same college, and reconnected through a mutual friend over semester break. A few years later we got married beneath a clump of palm trees and are attemping to live happily ever after, gluten-free. 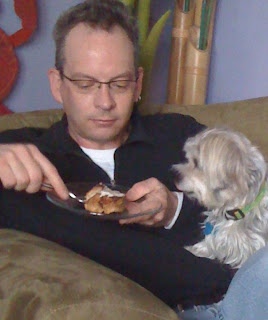 (John with my other favorite guy, Marley, who is turning 9 this year and has also become a fan of my gluten-free baking.)

« Not a Sweet–but so tasty! Buckwheat Waffles
A Sweet Education »