There is not an actual recipe to share with you  in this entry.  It was my birthday and I made my own cupcakes.  Perhaps this was more than a little self-indulgent, as I rather enjoyed making them. I did share them with friends, I just didn’t bake them for a specific friend. It was a really fun birthday spent with lots of friends at my favorite landlocked beach bar with cupcakes.  Boat drinks and cupcakes… 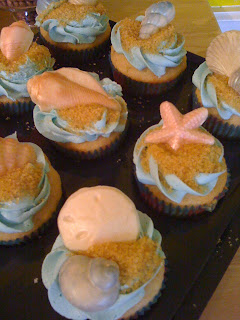 These are a variation of the Cadbury Egg cupcakes I made a couple of weeks ago, however I used masa harina in my flour blend instead of potato starch.  Not good.  They tasted like a really sweet cornbread, like what I remember Tippin’s serving years ago.  Or the also-closed Uptown Diner that was in Leawood’s Town Center Plaza.  Their cornbread muffins were rumored to be made with half yellow cake mix and half corn muffin mix.  That’s about what these tasted like.  The flavor was good but I didn’t like the corn texture.  So I doused them with Sailor Jerry spiced rum.  Not kidding, I totally did.  And they were like a thousand times better.  Hmm….maybe I do have a recipe to share this week, cornbread rum cake.  On second thought, no.  Still not good enough to share a recipe, but they were yummy enough to celebrate my birthday!

I frosted these with my standard buttercream frosting and topped them with a sprinkle of raw sugar and molded white chocolate seashells I made earlier in the week.  It was not intentional, but I realized the chocolate molds are a bit of a tradition for my birthday.  I bought them for a milestone birthday of mine 8 years ago, made the chocolates at home and hand-carried them on a plane to Florida to decorate my birthday cake, served beside the Gulf.  In the interim, they have been used for one friend’s birthday cake and shipped back and forth to Florida a time or two for use by a baking friend that relocated to the Mouse’s House from Missouri. 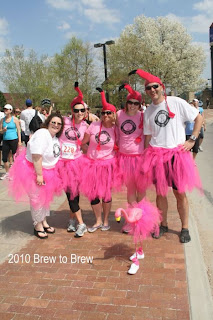 To celebrate my birthday, I ran the Brew to Brew 44-mile relay race with a group of friends.  After the race, we went to The Sandbar, the only bar that not only allows but actually encourages me to dance on the bar.  And dance on the bar I did, alongside friends who joined me in wearing pink tutus and crazy flamingo hats all the way from Boulevard Brewery in Kansas City, Missouri to Free State Brewery in Lawrence, Kansas.  It was the perfect way to celebrate another trip around the sun.

(Special thanks to Dick Ross of See KC Run for the photo.)