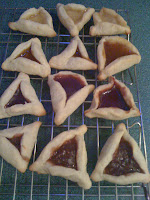 This week’s sweet was chosen for a couple of reasons:  it would be delivered on Earth Day so I wanted to include something representing the four seasons and I would share it with a friend who is Jewish so I wanted to make a traditional Jewish recipe.  Hamantaschen worked on both accounts!

I started with this recipe from Smitten Kitchen, one of my very favorite food blogs.  The photography is stunning and the recipes rarely call for ingredients hard to obtain.  I should take note…

Here’s my modified version of the recipe:

Rice Flour Blend:
3 parts white rice flour
3 parts brown rice flour
2 parts potato starch (not flour)
1 part tapioca starch
I mix a large batch of this and keep it in a sealed container.  This is my current favorite flour blend for everything from cakes to cookies to pie crusts.

Cream butter and cream cheese until smooth in electric mixer.  Add sugar and mix until creamed together.  Add egg, vanilla, orange zest and salt.  Mix until combined.  The flour is added last.  The dough should have a slightly sticky sugar cookie dough texture.  If it’s pretty sticky, add a tablespoon of flour at a time until the texture works for you.

Split the dough into two equal halves and form into two discs.  Place each between two sheets of plastic wrap, leaving lots of extra wrap at the ends. Refrigerate for an hour or more. 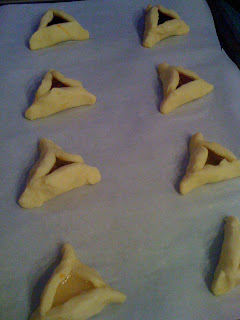 Remove one disc of dough from the refrigerator and roll out between the sheets of plastic wrap.  By leaving lots of extra on the ends, you can roll the dough out without turning it out onto a floured surface.  Use a 2 1/2 round cookie cutter to cut dough into circles.  Add a scant teaspoon of filling into the center.  Fold the dough in from three sides and tightly crimp the corners.  Seriously, tightly crimp the corners.  I neglected to do this on the first sheet of cookies and had little pancakes covered with sticky jam.  Bake on a parchment lined sheet for approximately 22-24 minutes.  Cool on racks.

(Photo shows cookies before baking.  I had trouble getting the shape right and got help from my hubby, who says these look like Tricorne Revolutionary hats.) 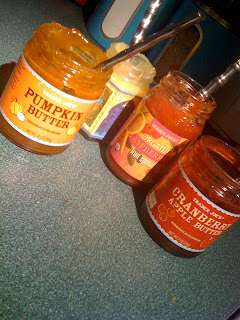 In an attempt to represent the four seasons with fillings, I used Raspberry jam (while not exactly in season, Raspberries make me think of Spring), Lemon curd for Summer, Pumpkin Butter for Autumn and Cranberry Apple Butter for Winter. I wish there was one clear favorite filling for me, but I really like them all.  I did not expect to like the Cranberry Apple Butter, but it had just enough of a tangy bite to work well with the sweet cookie dough.

On Earth Day, Celeste, Em and I drove to Pittsburg, Kansas for the PostSecret event.  The creator of the PostSecret project, Frank Warren, spoke and signed books.  It was a terrific  road trip, thunderstorm and all.  Oh-and there was a little disenchantment.  Many things have a dirty underbelly and it takes a long time for discover just what that is. It took less than an hour in the presence of Frank Warren to change how all three of us feel about the PostSecret project.  I think we may each have a different take on what the dirty underbelly of PostSecret is but I’m supposed to be blogging about baking and the friend with whom I shared the treat…maybe another time I can rant about secrets.

After we made it to Pittsburg and found the auditorium, Hamantaschen were shared with Celeste.  The first thing out of Celeste’s mouth was, “It’s the wrong time of year for Hamantaschen!”  I baked a seasonal treat at the wrong time of year!  Celeste asked if I would make Christmas cookies in August, which I would.  I also make pumpkin pie in June.  Celeste even shared a recipe for these on Facebook months ago, but I didn’t think about the timing.  I learned a lot from her statement, mostly that my heritage isn’t very deeply rooted in my baking selections.  While I knew Hamantaschen were usually made for Purim, I had no idea they were not made at other times of the year. On the drive back to KC, Celeste shared a few other thoughts on Hamantaschen, such as what fillings would be traditional.  Turns out I missed the mark on some of my fillings, too, but boy they were tasty!  The addition of cream cheese to what is essentially a sugar cookie dough is delicious. No way could I make these only once a year! Usually I browse the internet for information on the treats I am baking.  It was such a joy to get some background information on what I had baked from a friend this time.  I learn much from Celeste, mostly about 90210 re-runs, but she is also very knowledgeable on many other topics, Hamantaschen among them. 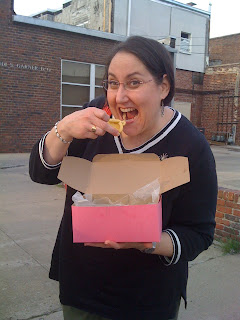 I met Celeste 3 years ago or so.  She would come to dinner with her mom and her niece Lauren at a restaurant where I created balloon sculptures.  Lauren would challenge me every week with a crazy new idea and as I sculpted, I would chat with her family.  It didn’t take too many weeks of this to figure out Celeste had a quick wit and great sense of humor.  Plus she had the coolest rubber rain boots!  That alone was reason enough to foster a friendship!

Then I discovered we both enjoyed vegetarian food and I didn’t have to explain raw veganism to Celeste–in fact, she sent me information on a friend who is a raw vegan chef.  The irony of this is that we met at a burger joint. But the most important thing about Celeste is that we giggle, guffaw and grin together…and laugh and laugh.  There’s not much that feels better to me than laughing with a friend.  Happy Purim, Celeste! 🙂