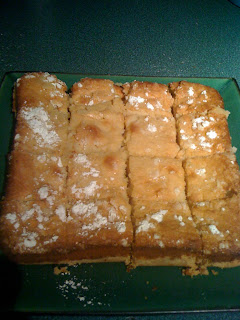 This week’s Sweet is another creation I had never baked before:  Gooey Butter Cake.  I wanted to share this week’s treat with a friend in St. Louis and was looking for something St. Louis is known for.  Toasted Ravioli wouldn’t work.  Neither would a concrete or an Imo’s pizza.  Nope, it had to be Gooey Butter Cake.  But where would I find a recipe?

I spent quite a bit of time looking for a recipe on-line, but found nearly all of them were based on a cake mix.  I’ve paid enough homage to the boxed mix lately and wanted to do this the “from scratch” way.  Some recipes used a yeast cake as the base, but I don’t have good luck with gluten-free yeast recipes.  I tweeted my recipe woes and my friend Deanne shared several links, one of which became THE recipe.  Here’s where I started, with a recipe adapted from the cookbook St. Louis Days, St. Louis Nights, published by the Juion Leage of St. Louis 1994-1995.  It was provided to them by Fred and Audrey Heimburger of Heimburger Bakery.

Gooey Butter Cake is a two layer creation, with the bottom layer being yellow cake and the top being a egg and sugar filling.  Sometimes cream cheese is incorporated into the top layer.  Gooey Butter Cake reportedly got it’s start when a depression-era German American baker reversed the proportions of flour and sugar in a cake.  Not to be wasteful, it was eaten and found to be tasty.  I agree!

Here’s my final take on the recipe:

Preheat oven to 350.  Combine the ingredients for the bottom layer until it resembles a fine crumb, clinging together.  Press into the bottom and a bit up the sides of a 9″ x 9″ pan.

Next mix the filling by creaming the sugar and butter together with an electric mixer.  Add in egg.  Alternate adding a bit of the flour, xanthan gum and a bit of the milk until mixed together.  Add corn syrup and vanilla.  Mix until well blended.

Pour filling on top of crust.  Sprinkle with powdered sugar.  Bake 30-35 minutes or until cake is nearly set.  It will still be jiggly in the middle, but not runny.  Let cool in pan.  Slice into 12 squares.

I shared this week’s Sweet with my friend Thad.  We met many moons ago when Thad moved back to his hometown of Topeka from Boston.  He didn’t stick around long, as he get reacquainted with the love of his life and scooted to the East.  Darn the luck…or maybe not.  Thad and I share the same profession and while I certainly enjoyed it when he lived closer to the KC, it’s okay that he is sharing his talents in a market four hours away from me.  We do get the chance to work together occasionally, but lately it seems like we mostly grocery shop together. 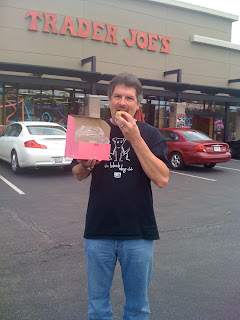 The last few times I’ve been to St. Louis, whether for business or fun, I’ve met Thad at Trader Joe’s.  We catch up while pushing overflowing shopping carts up and down the aisles, often going down the same aisle three or four times to make sure I didn’t miss anything.  But if I should forget something, I know Thad will help me out.  He once agreed to mail a box of JoeJoe’s to me so I could finish my holiday shopping list.

I think that’s about all I should share about Thad.  If I typed much longer, it would be about the debauchery that seems to follow us across the country every time we end up in the same place.  Or maybe I’d rant about our mutual opinion on the seafood industry.  Either way, you don’t want to read about it. Or do you?

Oh, and about that cake…Thad said it was too thick, that it is usually thinner like lemon bars.  I had stuck a couple of pieces in the freezer to share with Deanne, since she recommended the recipe, and she, too, said it was pretty thick.  If I were to make this again, I might try to press the bottom layer further up the sides of the pan before adding the top layer.  Or I might not change a thing.  I thought it tasted pretty darned good just the way it was.