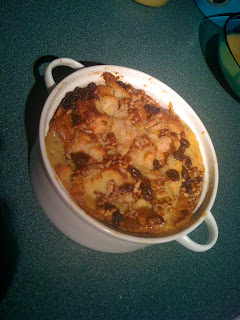 Have I mentioned that I adore Udi’s products?  Their sliced bread is the only gluten-free sliced bread I regularly buy.  Their bagels are amazing (another item on the list of things I thought I would never eat again) and their pizza crust is used in my dinner several nights a week.  When I heard they were sponsoring a recipe contest along with Gluten Free Ville, I knew I had to enter.

I thought about making a pizza, but truthfully what I do with their pizza crust is pretty typical, no super gourmet toppings other than an occasional Trader Joe’s bruschetta out of a jar and some goat cheese.  Nothing that seemed contest worthy to me.  I stared at a loaf of Udi’s sliced bread for quite awhile until it hit me: bread pudding!  But I didn’t want to make bread pudding out of sliced sandwich bread.  Then I recalled the lady that owned the diner in my hometown used to make bread pudding out of Honey Buns.  It was some of the best bread pudding I have ever had, even though Honey Buns on their own aren’t that great.  If I started with Udi’s cinnamon rolls, what would the bread pudding turn out like?  It turned out so delicious that I ate four servings of it…dinner on the night it came out of the oven, breakfast the next morning, dinner that night and then breakfast again.  I was relieved to find it completely gone at breakfast because as long as there were leftovers, it was going to call out to me.  I’ve never been so tempted with one of my sweet treats, usually eating just my one allotted serving for the week and sharing the rest.  This week was nowhere near that easy.  This bread pudding was DELICIOUS! 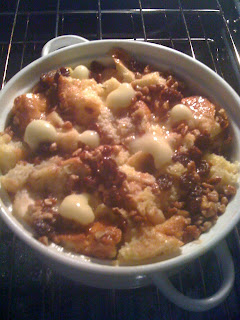 Slice the butter and dot the top of the rolls with it.  Place in oven and bake 45 to 50 minutes until it is set in the center and bubbling around the edges.
Vanilla Bean Sauce
½ cup sugar
3 T. light brown sugar
1 T. white rice flour
1 t. ground nutmeg
1 Karbaumer egg
2 T. Shatto butter
1 ¼ cups Shatto whole cream
1 vanilla bean, split and scraped
Whisk all ingredients together and cover over medium heat for 12 to 15 minutes, whisking constantly.  The mixture will thicken considerably and even more after it cools.  Sauce can be served either warm or at room temperature.
I shared the Cinnamon Roll Bread Pudding with my neighbor Marquetta.  She is the first person who ever mentioned having Celiac disease to me.  During the holidays, I take baskets of baked goodies to the neighbors.  The first year we lived in this neighborhood, Marquetta thanked me graciously for the basket of goodies and said her husband would enjoy them, but she would have to pass because she has Celiac disease.  I had no idea what that even meant. 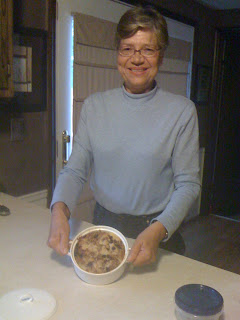 I made a note in my baking journal so I could be sure to take something for her the next time I dropped goodies by.  In the meantime, I met someone else with Celiac disease and baked for her, so although Marquetta didn’t receive my first attempt at gluten-free baking, she sure was the first person who mentioned anything about gluten-free to me.
The next holiday season, I baked a batch of gluten-free brownies for Marquetta.  The very next day I got the nicest thank you note, thanking me for going to the effort to bake something she could enjoy, which rarely happens.  I understood this from a vegetarian perspective, but that somehow felt different because I choose to not eat meat.  It’s different with gluten.  I have a better understanding now of what it means for someone to go to the effort to make something that fits within my dietary restraints and always try to follow in Marquetta’s example of gratitude.
When the doctor told me I needed to eliminate gluten from my diet, Marquetta’s house was on my short list of places to go for help.  She loaned me a stack of cookbooks and told me where I might try eating out.  I was an absolute mess, assuming I was going to be forced to eat meat since so much faux meat is wheat-based. Not true.  I assumed eating pizza out was a thing of the past, it is not. By the time I left Marquetta’s house weighed down with cookbooks, I was pretty sure I could handle this gluten-free thing.  And I can.   Thanks, Marquetta!
« Sweet of the Week #18, Cake Pops/Balls/Truffles with Deanne
Meet My Friends: Greg Frisbee »