I’m late writing about this, but it is still worthy of mentioning… 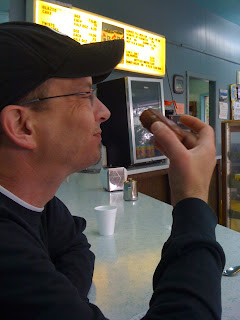 On the day of a new chain donut shop’s grand opening, a group of local donut lovers went to John’s Space Age donuts instead of supporting the corporate, over-processed, over-hyped donut shop down the street.  This gathering was organized by KCMeesha and well attended–so well attended that John’s Space Age sold out earlier than usual! There was no fighting over the last apple fritter (which I snagged and delivered across town) but there was some disappointment over the early sell-out of glazed donuts.  By early, I mean prior to 8 a.m.

It was great to have an excuse to visit my favorite local donut shop on a weekday, even better to meet in person many of the local bloggers.  It was a who’s who of the local food blog scene sitting at the counter of John’s Space Age. And there were donuts, lots and lots of donuts. Folks were buying donuts by the dozen, quickly emptying the bakery case.

After I left John’s Space Age, I went to Fluffy Fresh Donuts on Johnson Drive in an attempt to support another local donut shop on the one day I thought their business might feel the effect of a new donut shop opening nearby.  Instead, I was met by this sign hanging in the window: 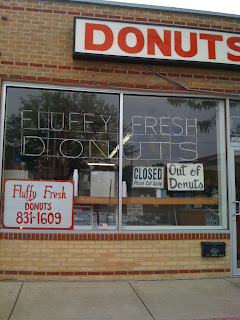 Perhaps my trepidation regarding the plight of small local donut shops was for naught.  I hope the planned influx of corporate donut shops will have no long-term ill effect on these amazing purveyors of fried dough.

« Food on a Stick #1, Chocolate Covered Frozen Banana
Whatcha Up To These Days? »