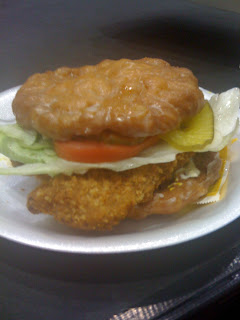 After watching our friends sample the Krispy Kreme Donut Burger at the Kentucky State Fair in Louisville, my husband John had an idea for another donut-centric sandwich, the Apple FritterLoin. His idea was to use two apple fritters for the bun, a deep fried tenderloin and perhaps a bit of mustard.  From the mind of a vegetarian…

We set out early in the morning to a donut shop recommended by Kelly, who works at the Expo Center where we were working. I often ask locals for donut recommendations when I am working out of town and am rarely steered the wrong direction. Last year when working in Louisville, I had trouble getting to all of the donut shops recommended to me. The shop Kelly recommended, Sugar and Spice, was not on the list of anyone I asked last year. Interesting, perhaps a hidden treasure awaited us! 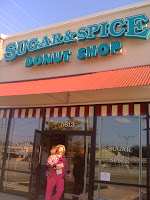 Um…yeah, interesting. After driving twenty minutes to get to Sugar and Spice, we discovered they don’t make apple fritters. WHAT?!? No apple fritters? Instead, they have something called an apple critter. About the size of a dinner roll, it’s a doughy ball filled with a bit of gooey gel inside, resembling what I can only describe as canned apple pie filling. We bought some just in case we couldn’t find an apple fritter and hit the road to find another donut shop.

We ended up in Shepherdsville, Kentucky. Shoe aficionados may recognize this as the city from which Zappos deliveries originate. It also happens to be the location of a donut shop with apple fritters, really good apple fritters.

Counting on our GPS to lead us to the donut shop, we finally spotted Donut Express after passing by twice. Tucked back off of the main street in a tiny strip mall, this donut shop is a gem. We parked beside a mid-80’s Lincoln Town Car, burgundy, that looked almost as new as the day it was driven off the lot. Once inside, we saw the car’s driver, a lady in her late 70s who looked to have been to the beauty shop to get her hair done recently. She was waiting for her donuts to be boxed, so I took the opportunity to ask her if she had ever had the apple fritters there. “Yes, they have the BEST apple fritters here. I have tried them two or three other places, but these are by far the BEST.” That’s the only recommendation I needed. 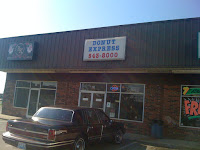 We ordered 3 apple fritters to go, two for the sandwich and one for John to eat sans tenderloin. I asked the guy behind the counter what makes his apple fritters so delicious. There was a bit of a language barrier between us and I only understood him to say something like, “Stem…Apple…Crunchy.” I have no idea what the stem has to do with the fritters, but my husband did confirm the fritters were indeed crunchy. They were also glazed on one side only. Often they are glazed on both sides. These were very flat, perfect for a sandwich bun.

Fritters and critters in hand, we headed off to the Expo Center at the fair.  Where better to find a fried tenderloin than a State Fair, right?  It turns out it is not so easy.  Our friend Mark headed off to find the tenderloin and came back with sliced pork loin.  Not quite what John had in mind, but if we had to, we would make it work.  We set up a time to try out our creation with two friends and headed to their area of the Expo Center, a 10 minute walk from where we were working. 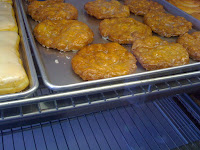 While on that walk, we passed numerous food vendors.  I stopped at an information booth and asked about a fried tenderloin.  I was told it didn’t exist at the fair.  When we got to the stage where our friends perform, I decided to take one last chance on the neighboring food court and found the Kentucky Pork Producers stand.  YES!  They had a deep fried tenderloin bigger than your head.  It was crunchy and flat and brown, everything I think a tenderloin needs to be.

Mark, Rob and Bill shared the sandwich.  Rob is Babaloo, a funky children’s musician that adults like, too, (his CD is in my car right now) and Bill is the creator of a super cool kid’s game show.  Ever watch that Minute to Win It show?  Bill is like a high energy version of that, keeping everyone within shouting distance entertained.  His show is a hoot.  We had a lot of fun with these guys and they were great sports about eating the Apple Fritterloin concoction.

I don’t think I need to tell you much more about the sandwich…the video says it all:

About those apple critters…we used them with the sliced pork loin to make Apple Pork Sliders.  The apple critters were about the size of a slider bun.  They were not a big hit.  While trying to catch a comment about them on video from Bill, what I caught instead was him reaching for another wedge of the Apple Fritterloin.  It was that good. Between the three guys, it was completely devoured in under five minutes.The Apple Fritterloin…watch for it at a fair near you. 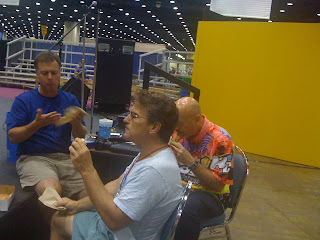 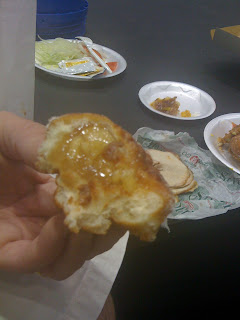