On Saturday, November 20th, 48 intrepid donut fans (plus me) headed out early to visit five of my favorite locally owned donut shops in the KC area.  Okay, maybe six…

While it’s pretty obvious how much I love donuts, I had no idea so many people enjoyed donuts enough to show up for the first Tour de Donut.  I invited friends from a car club I belong to and they showed up in full force–more than 20 zippy little cars.  Other friends who love donuts, who love food, who love adventure, joined us.  I’ve got much to say but wanted to start by saying this was one of the best adventures of my donut journeys so far.  I’ve been to donut shops on both coasts, more states than I have fingers and toes to count them on, but nothing could compare to seeing my favorite tiny local donut shops packed to the gills, folks standing on the sidewalk chatting over coffee and donuts, donut shop owners entertaining customers with bad jokes and fresh donuts. It was more fun (and more donuts) than one gets to have most days!

John’s Space Age Donuts was our initial gathering spot.  Their apple fritters are among my favorite donuts.  I don’t believe any donut shop anywhere has a better apple fritter. Their chocolate raised glazed donuts are a rare find.  I also really love the atmosphere.  It has everything I think a donut shop should have: a vintage counter with stools, regulars known by name and fresh donuts.  When I arrived at John’s, the sun was rising and my friends from 3 states were gathering on the narrow sidewalk with donuts in hand.  It was the perfect place to start Tour de Donut.  I stayed behind a few minutes after the 30+ cars of donut fiends rolled out to the second donut shop to make sure I didn’t miss late arrivals and saw something that reminded me of why I love donuts.  A lady walked in the door and she was met at the cash register with a bag that had *her* donut in it.  She said to the guy at the counter, “How did you know?” He replied, “I saw your car pulling into the lot.” I’ve never received service like that at a big chain, nor have I gotten a donut as tasty as what was inside that bag he handed to her.  Mayberry, just a little touch of Mayberry on a Saturday morning.

Our second stop was Oz’s Maq Donuts House.  My favorite donut here is the pineapple fritter.  While here, it was discussed that perhaps the next donut-sandwich creation needs to be some sort of ham sandwich between two of these fritters.  Let me know if you’re interested–I’d love to capture the moment!

Oz’s used to be a Winchell’s.  While doing a dry-run of the Tour de Donut route, I talked to Maq about the history of this donut shop and his personal donut history.  He started working for Winchell’s in 1978 when donuts were $1.69 a dozen.  He was this area’s manager for Winchell’s when they closed all of the KC locations.  He purchased a couple of them, this location being the last one remaining open.  It’s not a fancy donut shop, seating is limited, but the service is always friendly.  Among all of the donut shops I visited in planning Tour de Donut, Maq was by far the most excited to share his donut history and bounced with excitement when I told him we were coming by for donuts. His enthusiasm for donuts makes me smile.

Our third stop was Fluffy Fresh.  My favorite donut here is the filled long john.  It is filled with a fluffy icing, not pudding.  Several folks on the Tour also enjoyed the Key Lime donut that is a relatively new offering.  By the time we got to Fluffy Fresh, a bathroom break was in order.  Many small donut shops are without public bathrooms, as is Fluffy Fresh.  The Sherwin Williams store next door welcomed everyone in, which surely made folks competing in the Most-Cups-Of-Coffee contest a bit more comfortable.

Our fourth stop was Ridgewood Donuts in the Blue Ridge area of Kansas City.  The guy behind the counter here put on quite a show, telling silly jokes and occasionally tossing a free donut in a bag for a family that wasn’t convinced of the need for “just one more” donut.  The red velvet donut was my recommendation here, although some folks thought it tasted too much of food coloring.  I struggle with this when baking red or green velvet cupcakes, so I knew what they meant without trying the donut.  Other people had this donut on their favorites list for the entire tour.

Our fifth, and last official, stop of the Tour was Poppy’s Donuts in Independence.  Upon arriving here, one Tour attendee asked me why the chosen driving route took folks through the Sterling area of Independence, suggesting instead a more picturesque route.  See, that’s the thing about donuts, I believe they are every man’s food.  Some of the best donut shops I have visited were in parts of town I was told not to visit alone (hello, L.A.!), some are in fancy corporate business parks where I have slid a dollar to the guy in front of me in line who found himself without cash in a plastic-free business (howdy Las Vegas!) and some are in the neighborhoods we all live in, neighborhoods of all sorts. I have enjoyed so many of the things I have seen visiting donut shops, including the run-down neighborhoods.  That drive we took on Sterling, well…it took us past a Habitat for Humanity house that was being built that cold morning–those folks deserved donuts.  It took us past a motel built in the 50’s that has a terrific historic sign out front.  I plan to stop to photograph it soon.  I never would have noticed it if I stuck with my shiny-and-new route through town.  But about the donuts…

Poppy’s has a really wide variety of donut flavors, a great counter with low stools and cheery gals behind the counter.  While waiting to use their restroom (YAY! a bathroom!), I heard one of the gals asking everyone seated at the far end of the counter if they had all been denied a donut at least once.  Everyone laughed, they were having fun and eating donuts.  My favorites at Poppy’s are the cream-filled eclairs and the chocolate cake donut.

Five donut shops in, it was time to declare winners in the two contests I offered at Tour de Donut, most donuts eaten and most cups of coffee.  Strategy definitely came into play, but not as much as I thought it would.  I expected someone to think this through, to eat only raised glazed donuts at each location.  It didn’t turn out quite like this but one guy did hold off until the last stop and ate more than half of the donuts necessary to win at the final stop.  Nine donuts later, a winner was declared.  One gal (who is quite thin and skipped a Weight Watchers meeting to come to Tour de Donut) ate 8 1/2 donuts and at least 5 cups of coffee.  And another fella had 7 donuts!  The coffee winner drank 5 1/2 cups of bad donut shop coffee.  Pretty impressive–although I really thought someone would eat an entire dozen donuts! 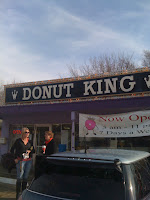 I offered up a sixth location, but thought most folks would be exhausted and stuffed after visiting five donut shops.  I was wrong.  More than twenty folks headed north to Donut King.  My driving directions said, “Donut King will be on the right, past the Gentlemen’s Club, before the tattoo parlor and used car lots.”  I neglected to mention it is also across the street from the Discount Smokes shop.  It’s an interesting area and always good for people watching.  Plus the seasonal flavors here are divine!  On top of the favorites list of those that visited all six donut shops was the pumpkin donut at Donut King. (Update 05/11: Donut King has relocated after 42 years in the funky little purple shack on Chouteau.  Donut King is now located at 2320 Armour Road in North Kansas City.)

About the favorites, the donuts most raved about were the apple fritter at John’s Space Age and Donut King’s pumpkin.  Several mentioned the red velvet at Ridgewood and two mentioned the chocolate filled long john at Fluffy Fresh.  One attendee said the pecan roll at Poppy’s was divine, very pecan-y. While I did razz him about that descriptor, I know exactly the flavor he was describing–fresh pecans, not that rancid oil flavor that comes from stale or frozen pecans.  A couple of folks made a point of telling me that I was right about the BAD coffee at donut shops. It’s certainly not coffee house coffee at  most donut shops.The overwhelming input I got from folks was how much fun they had, how much they enjoyed the donuts and time with friends old and new, and how long it would be before they ate a donut again.  I don’t believe it, fully suspecting they will be sharing some of these donut treasures with their friends in the next month.  I know I will…egg nog donuts from Donut King are on my holiday shopping list!

There were many fabulous photos taken on Tour de Donut.  Thanks to the following folks for sharing photos:  Eileen Dugan, Jenny Vergara, Jim Clark, Jim Petersen and Laurie Sorenson. Click the photo below for more…