This week’s Sweet celebrates Movember.  You can celebrate, too.  Click here for more information. 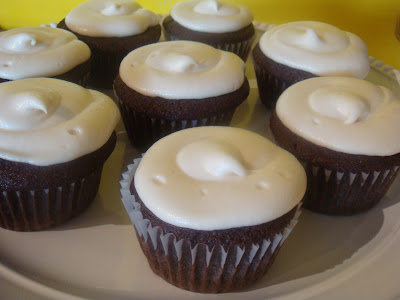 To celebrate Movember, I wanted to bake something manly. I thought about a savory cupcake but nothing really stuck.  So I went with beer.  I know beer is not exclusive to men, but the fellas in my world seem to have more of an affinity for beer than the gals.  Regardless of gender, I think you’ll like this one.  The cupcakes are very gooey, almost brownie-like.  The beer seems to have deepened the chocolate flavor. I could taste the rich chocolate in mouth for many minutes after devouring one of these.  The frosting may contain just a hint of beer flavor, but mostly tasted like a really creamy buttercream frosting.  I think a darker beer might have provided more beer flavor in the frosting.

Beer Cupcakes, makes 22
Inspired by this recipe from Big City, Little Kitchen whose recipe was inspired by Nigella‘s Guinness Cake recipe in Feast.

Combine the beer and butter, chopped into small pieces, in a large sauce pan.  Heat to melt butter.  Remove from heat, whisk in cocoa and brown sugar.

In mixer bowl, mix ricotta and eggs with vanilla extract.  Add beer mixture.  Whisk together flours and soda in separate bowl and then mix into liquid mixture.  Pour a scant 1/3 cup of batter into cupcake papers and bake for 25 minutes.  A toothpick inserted into center of cupcake should come out clean.  Cool completely on a rack before frosting. 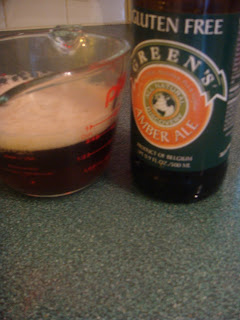 In mixer bowl, combine cream cheese and butter until smooth.  Add beer.  Slowly sift in powdered sugar until desired frosting consistency develops.  I made the frosting a bit thinner than usual as I wanted a smoother “beer foam” appearance.  You could use less beer or more sugar to thicken this frosting.

Frost by your preferred method.  I used a mechanical pastry bag.  I topped these cupcakes with a wax mustache. I doubt the grape flavor of the wax mustaches enhanced the cupcakes but they made me giggle. Enjoy!

This week’s Sweet Friend is David.  He’s married to my friend Charlotte, who was my Sweet Friend the week I made lemon meringue pie-in-a-jar.  I had no idea that pie-in-a-jar would be the most popular sweet on my blog!  Based on the number of viewers, either folks like lemon pie or baking in jars.  Anyhow, David is married to Charlotte and I really enjoy them both. We’ve sure had lots of fun traveling together, eating together, laughing together. 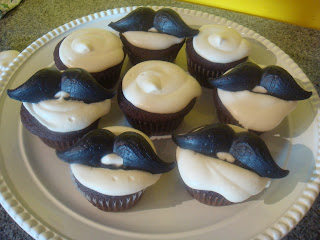 I met David through a car club.  Before retiring and traveling the world, he worked at tire distributor and kept me rolling.  When I had trouble with those stupid runflat tires the factory put on my car, he helped me pick something that would work on the street and the track.  When I needed some super duper tires for my work vehicle, he knew all about tires made to handle heavy cargo loads. He literally kept me on the road for years. Then he retired.

Even though he is retired, I still pester David for his input on tires.  He is still in the know but sometimes it’s hard to catch up with him.  Sometimes he’s on a cruise ship, sometimes he is in China or Germany or dining at a Paula Deen buffet, a Memphis BBQ joint or a fondue restaurant in Switzerland.  When I delivered these cupcakes to him, we had a great conversation about his recent meal at a Paula Deen buffet.  David shared that recipes are displayed with every dish on the buffet.  Not only is this great if you want to make one of her dishes at home, it’s terrific for people like me who have dietary restrictions and need to verify ingredients in a dish.  While I rarely eat at a buffet, I would make a point to check out a Paula Deen buffet if I were in the area. 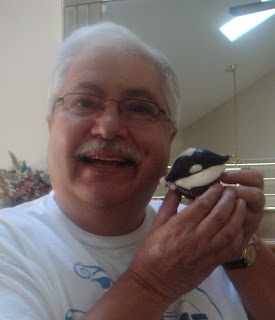 And David just happens to have a mustache.   And he likes beer. Happy Movember!