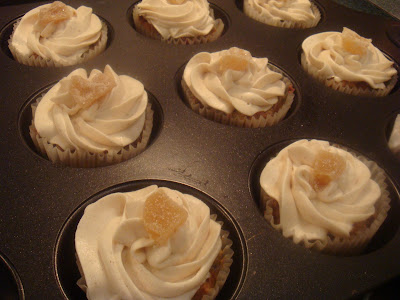 Maybe you are wondering where I got off on my numbering system. After all, I should be sharing Sweet #49 with you.  Instead, I’m backtracking, sort of.

Week #9 was a raw vegan cheesecake, shared with Mandy.  A lot has changed in the last 40 weeks and Mandy is now pregnant.  Very pregnant. This called for an exception to the 52 Sweets rule.  I’ve slipped an extra sweet into the journey to celebrate Mandy and the little guy that will soon join her family.  Sweet 9 1/2…

A few weeks ago, I came across this recipe for Brussels Sprouts cupcakes* from I Heart Cupcakes.  I sent a link to Mandy, thinking it was the perfect cupcake to stole off any pregnancy cupcake cravings. Not so! Mandy said it sounded good!   I love Brussels sprouts, but in a cupcake?  Yes, in a cupcake.

Today Mandy came to the gym expecting to train the small group of us who work out with her every week.  Instead, we surprised her with a visit from her favorite yoga teacher, Sarah.  We spent an hour on the  mat instead of doing the scheduled interval training.  And then we had cupcakes.  Brussels Sprouts cupcakes.  At the gym. 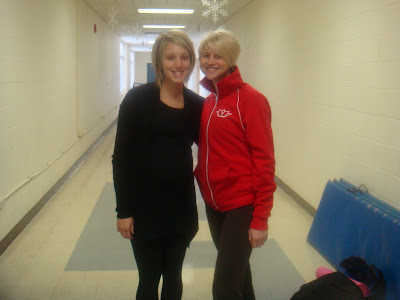 *I modified the recipe above, making this gluten-free and vegan. I’ve also converted it from weights to measures.  It isn’t overly cake-y, but was very well received today (no extras to bring home) and is very hearty.  I will definitely be making them again!

Mix flax seed meal with hot water and set aside for a few minutes to thicken.  Once thickened, beat with sugar and oil for a couple of minutes in the bowl of stand mixer.  Add flour, cinnamon, ginger and vanilla extract and mix for about a minute. 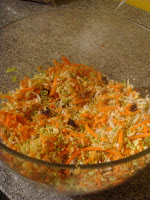 Fold in carrots, Brussels sprouts, walnuts, raisins and coconut.  Fill each cupcake liner with a scant 1/3 cup of the mix.  Bake for 20-22 minutes.  These will test clean using a toothpick when they are done.

Cream the Earth Balance and Tofutti BTCC together with a hand mixer for a couple of minutes.  Add the sifted powdered sugar a little bit at a time and beat for approximately 4 minutes until smooth.  You can vary the thickness of this frosting by adding more or less powdered sugar.  It’s very forgiving.

Frost using your preferred method.  I used the mechanical pastry bag with the large star tip and topped each one with a piece of crystallized ginger.