Last year I shared this recipe for Baked French Toast.  I really like this recipe because it can be made the night before and with the quick addition of a little syrup-y concoction on top in the morning, it goes right into the oven for breakfast. Super easy!

Last week Jillian from Udi’s Gluten Free shared her recipe for Stuffed Baked French Toast.  Why hadn’t I thought about stuffing the toast?  Jillian suggested a hazelnut spread and perhaps some fruit.  My husband is a Nutella fiend, so for New Year’s Brunch, I made Banana Nutella Stuffed French Toast, a variation of my recipe combined with Jillian’s “stuffed” idea.

Our New Year’s Brunch guests really liked this.  It was almost like a chocolate bread pudding.  It certainly required no additional syrup.  I made half of this with Udi’s Cinnamon Raisin Bread and half with their Whole Grain Bread.  I preferred the Whole Grain Bread, however both worked very well in this recipe. 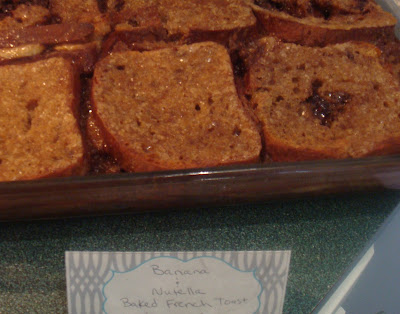 Butter a 9 x 13 dish with Earth Balance.  Spread Nutella on one side of all 12 slices of bread.  Lay six slices of the bread in the dish, Nutella side up.  Cover with thin slices of banana, then lay another slice of bread on top, Nutella side down, covering the entire dish. 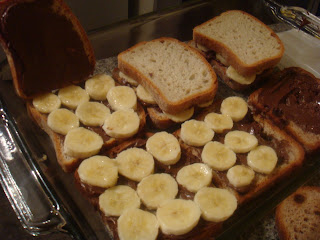 Beat together the eggs, hazelnut chocolate milk, vanilla, cinnamon and nutmeg.  Pour over the bread, cover and refrigerate overnight.

In a small sauce pan, melt Earth Balance, brown sugar and syrup until bubbling.  Pour over the top of the bread and bake uncovered for 40 minutes. 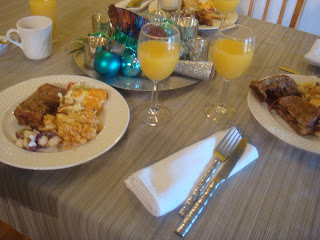