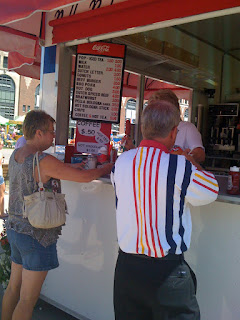 Another find at the Iowa State Fair, Pella Bologna on a Stick.

I have visited Pella, Iowa for the Tulip Festival several times but had no idea they were famous for bologna.  I went to check out the Bologna on a Stick stand, hoping to find someone eating the bologna to tell vegetarian me all about it.  I bumped into the perfect person to chat with, Mike the Siding Guy.

Mike sells siding.  He could also sell Bologna on a Stick.  I asked him if he would tell me about it and he proceeded to give me the best sales pitch a big chunk of skewered meat could ask for. He told me it’s the best deal on the fairgrounds, it’s not a skimpy piece of bologna but instead of a big hunk of processed meat.  He also told me that Pella bologna is all beef and has a smoky flavor.  And again, that it’s the best deal at the fair. 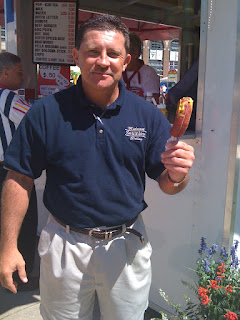 The Bologna on a Stick was $3.50 at the Iowa State Fair.  While at the fair, I assumed Pella was the brand name of the bologna and didn’t ask the folks at the stand what Pella bologna they sold.  See, there is more than one company that makes Pella Bologna.  Ulrich’s Meat Market claims to be the original.  If you happen to try this at the Iowa State Fair, let me know what brand bologna they use.  I’d love to know!