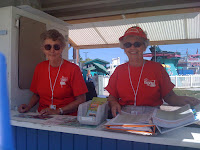 My first stop at the Iowa State Fair was the information booth. I spent several minutes chatting with these two lovely ladies. They had a binder that detailed all of the Food on a Stick options at the Iowa State Fair.  They helped me locate the elusive OctoDog, among other must-try items on my lengthy list.

The OctoDog is a hot dog, sliced using a funky apparatus to that is has eight legs.  Cooking the hot dog after cutting it causes the “tentacles” to curl a bit. A large straw is carefully inserted into the top of the dog right before serving.  At the Iowa State Fair, it is served on a bed of macaroni and cheese. 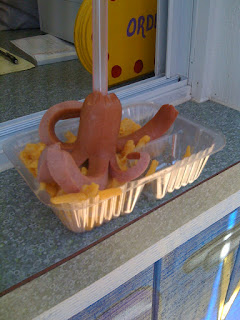 The OctoDog booth was tucked out of sight, along the sidewalk leading into an exhibit building.  Even though the info ladies had sent me the right direction, I had walked past it at least 4 times before spotting the booth.  Once I located the booth, I ran into Wade the Kid from Bevington, Iowa.  Wade told me all about why he likes the OctoDog (it’s JUST like a hot dog he said) and he also mentioned he was getting TWO OctoDogs, one for him and one for his sister.  I asked if he ate hot dogs with macaroni and cheese at home and was told it’s mostly something you eat at school, not at home.  Good to know. 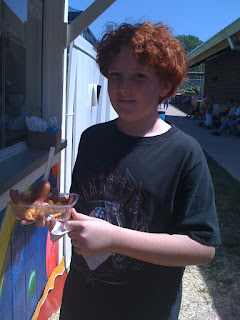 Thanks, Wade the Kid from Bevington, Iowa for indulging all of my crazy questions about the OctoDog.  If they made a veggie version, I would definitely try it!