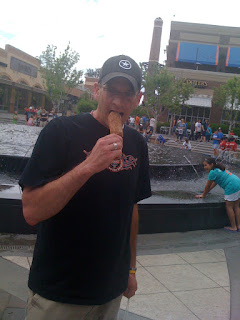 John and I dropped into Rocky Mountain Chocolate Factory at The Legends because we noticed a few Food on a Stick items in the window.  Chocolate dipped apples, skewered marshmallows enrobed in chocolate and this, the Twinkie Doodle.

Because I am gluten-free, John agreed to try the Twinkie Doodle.  It’s a Twinkie dipped in “white candy coating” then rolled in cinnamon and sugar.

I’ve been married to John for 15 1/2 years and rarely hear him make a bad comment about food.  I cooked a Kashi frozen meal for him once that contained barley (don’t judge, I was short on time) and he politely said he didn’t much care for it, that’s all.  He never says “Dinner was horrible.”  I tell you this because he didn’t finish the Twinkie Doodle, he pitched it after choking down about half of it and said he would prefer to never eat such a thing again.

Then I found out I had suggested a meaty treat to my vegetarian husband.  There’s BEEF FAT in Twinkies, y’all!  Who knew?!? 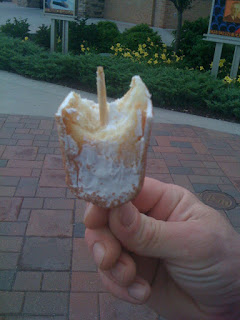 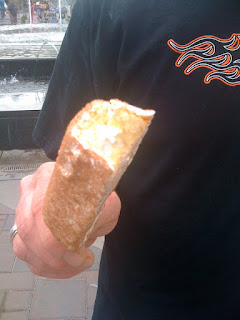 So there you have, the Twinkie Doodle.  Disgustingly sweet, loaded up with beef fat and covered in artificially flavored candy coating.  Yum.

« Japanese Candy…on a stick!
Food on a Stick #7, Tornado Potato with Becky »