While this isn’t officially one of the 52 Foods on a Stick consumed last year during Summer Fair and Festival Season, I wanted to share this with you because it is so amazing! 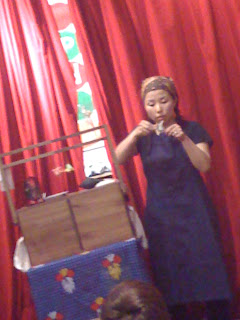 Tonight I went to a Japanese candy making demonstration, Amezaiku, at Reading Reptile, a local gem in KC, a children’s bookstore unlike any other.  It’s my go-to store when buying gifts for children. Recently they have added Le Petit Rouge, the cutest little cupcake counter you’ve ever seen serving sweet treats with fairytale names, like Three Bears and Goldilocks, Queen of Hearts, Jack Sprat and my favorite, the gluten-free Little Red Hen.  And now they have intricate pieces of sugar art created by Ai Osada of Joy Joy Confections.

Before tonight’s demonstration, I had no idea how the beautiful lollipops sitting on the counter at Le Petit Rouge were made.  I only knew they were extra special treats, obviously made with lots of care.  They are not something I would want to eat, they are too pretty!  What I saw during the demonstration can only be described as sugar magic.

Ai began the demonstration by telling us this was her first official demonstration.  Her set-up is simple and mobile, which is in line with the street art history of this style of Japanese candy-making.  A heating element is beneath a bowl of the candy making material.  A bulb pump allows her to inflate the pieces of candy and a small fan cooled the pieces once sculpting was completed.  A rack with holders allows the lollipops to be hung upside down to cool as well as right side up to display. 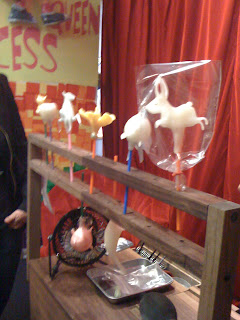 The cart appeared to have everything needed to create many lollipops.  Ai displayed a menu with nine creations listed and she made all but one of them in less than an hour, all while talking and answering the never-ending questions of the audience comprised mostly of children.  She shared with us that the candy material is corn syrup, it takes about 4 hours to make it and it is made of corn syrup.  Traditionally it is made with rice syrup, however Ai was unable to source the preferable type here.  She used a bit of cornstarch on her hands to eliminate any stickiness in the candy, which was surely present on a rainy evening.  To color the sugar, she applied a bit of food coloring with a paint brush and worked it into the sugar by repeatedly pulling and looping it.  Details were applied with a small paint brush and more food coloring, really bringing the sugar creations to life.

With the candy material being around 180 degrees, it seems it would take some adjusting to get used to the heat on bare hands.  Ai said the working time before the sugar hardens is about 3 to 5 minutes.  She mentioned that in Japan, no flavoring is added to the sugar.  She is currently adding butterscotch as she thinks it complements the flavor of the sugar better than the other flavors she tried, including citrus.

As Ai sculpted, the kids in the audience shouted out their guesses as to what animal she was making.  The adults in the audience had questions, too.  For me, a balloon sculptor by trade, I was fascinated at the similarity in the questions and comments posed to Ai.  “I know what it is–it’s a crocodile!  Can you make a Sumo Wrestler? How DO you do THAT?” And from the adults: “Where do you buy your materials?  Do you sculpt with anything else?  How’d you get started? How long have you been doing this?”

Before Ai had mentioned the street art history of Amezaiku, it became apparent there is some similarity in this type of sculpting and small-scale balloon sculpting.  That may be because both are small, portable and available for people to hold in their hands.  Or it may simply be because it is fascinating to see a medium we are all familiar with, whether that be balloons or candy, turned into something artistic.  Whatever it is, I’m intrigued and could have watched her sculpt these magic little sugar sculptures all evening.

During the demonstration, Ai created a horse, an octopus, a crane, a cat, a fish, a tooth (which my hubby pointed out was truly a Sweet Tooth), a flower, a pig and a bunny.  Waiting at the counter after the demonstration was an adorable box of ducklings.  So much better than a Peep! 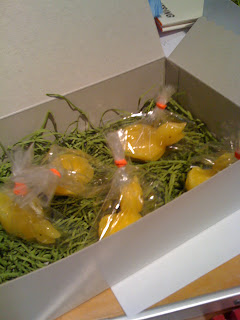 In all of my Food on a Stick adventures, tonight’s demonstration gets the award for being the most creative.  I still have not tasted one of these sugar sculptures and may one day.  But for now, I’m going to enjoy their cuteness.  Ai mentioned there are only around 100 Amezaiku artists in Japan and maybe only 4 or 5 in the U.S.*  This was truly a treat to see!

(My apologies for the photo quality.  I forgot my camera this evening and only had my phone available. If you really want to see how cute these lollipops are, drop by Reading Reptile!)

*One such artist sculpts outside of the Mikimoto pavilion at EPCOT.  There is a video here.

« Babycakes NYC at Downtown Disney
Food on a Stick #6, Twinkie Doodle with John »