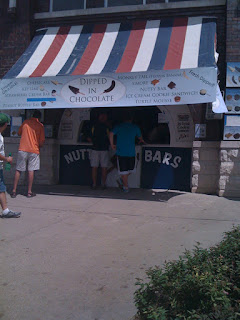 There had to be at least one disappointment along the path to finding 52 Foods on a Stick.  This was the first…

On the list of Foods on a Stick on the Iowa State Fair website, there were several desserts mentioned on a stick, all dipped in chocolate.  It turns out most of them were from the same vendor.  We went there hoping to score Tiramisu on a stick and found this sign:

On a Monday, after the weekend rush, they were out of Tiramisu on a Stick.  John settled for the Key Lime Pie Dipped in Chocolate on a Stick.  It was $4.50, which seemed to be the most common price for Food on a Stick at the Iowa State Fair.

Each of the desserts were individually wrapped in a freezer, taken out of the packaging by the guy behind the counter and then dipped in chocolate.  I’m not sure what the proper term is for this kind of chocolate, but it sets up after the dessert is dipped in it, like Magic Shell.

This wasn’t really like Key Lime Pie, more like a Key Lime Pie ice cream bar with a thin graham cracker crust.  And the crust stuck to the paper boat.  A fork was needed if this Food on a Stick was to be completely consumed.  Sadly, it wasn’t devoured.  John decided to save space for a few more FonaS treats instead. 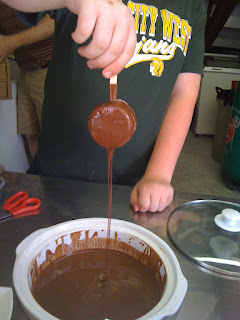 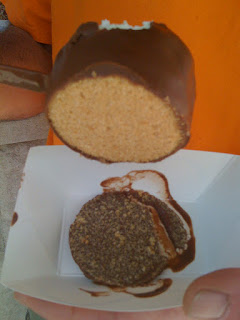 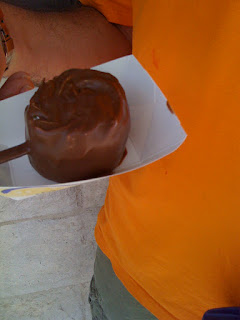