This Food on a Stick was by far John’s favorite of our trip to the Iowa State Fair.  Meet Deep Fried Pineapple on a Stick: 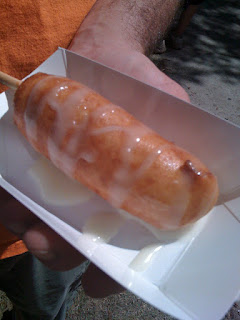 Looks like a corndog with frosting, right?  It’s not, although that sounds pretty good to me.  It’s pineapple on a skewer, dipped in funnel cake batter, deep fried and then drizzled with frosting.

While eating this, John said it reminded him of pineapple upside down cake.  He suggested that cherries could be interspersed with the pineapple on the skewer.  Sometimes I wonder if John’s true calling is to create bizarre fair food.  First the Apple FritterLoin idea and now Pineapple Upside Down Cake, which on a stick would be Pineapple Inside Out Cake.

This tasty Food on a Stick was $4 and the only one in Iowa that John considered having seconds.

I asked the girl working in the concession trailer what her favorite fair food was.  She suggested we get the deep fried oreos, which come 6 to an order.  But they weren’t on a stick so we passed.  She did mention that 2010 was the third Fair season for the Deep Fried Pineapple on a Stick.  I’m surprised this one hasn’t caught on.  Put it on your must try list for 2011. 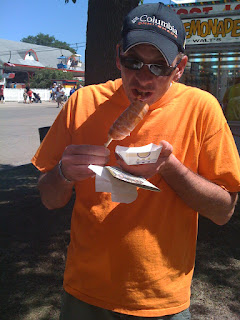