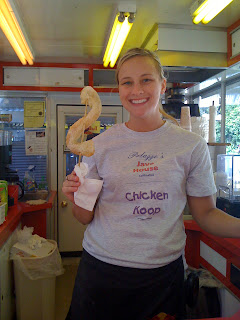 I mentioned Pella, Iowa before when writing about the bologna on a stick.  Dutch Letters are another food that Pella is known for.  Dutch Letters (almost always an “S”) are puffy pastry filled with almond paste, skewered and baked.  The fair food-variety reminds me of a churro without cinnamon.

John bought a Dutch Letter for $3.50 from Palazzo’s Java House at the Iowa State Fair.  The gal working there didn’t know the history of Dutch Letters, so I did a little digging.  Here’s some history, specifically explaining the Dutch Letters-Iowa connection. The first bakery to serve them in Pella opened in 1899.

I would love to try making a batch of gluten-free Dutch letters at home.  This is one treat that I really wished I could try!