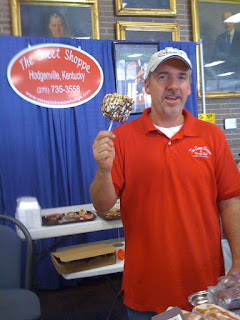 Sometimes Fair Food is completely over-the-top, throwing away all concern for how something tastes and instead focusing on either how much it weighs or how unlikely the combination of foods sounds (see Donut Burger).  The Crazy Apple is the first of these, a caramel apple of sorts that easily weighed five pounds. Even though the focus was on how enormous it was, it was a surprisingly great combination of flavors!

I spotted this at The Sweet Shoppe, a stand that sells Kentucky bourbon fudge.  (As an aside, I think Kentucky bourbon is redundant, as it’s only bourbon if it is made in Kentucky. Technically it could be made anywhere in the U.S., but after tasting Kentucky’s many varieties of bourbon, I don’t know why you would bother with any of the whiskeys made outside of Kentucky that are called bourbon.) I visit this stand every year while working at the Kentucky State Fair to get some fudge with the intention to taking it home to our house sitter.  That’s always the plan, but the fudge never makes it to the Missouri state line, we always eat it on the way home. When I told the fella working there about my Food on a Stick adventure, he graciously sent me away with a few Foods on a Stick to try. 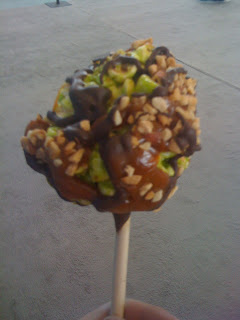 The Crazy Apple is a green apple dipped in caramel, drizzled with both white and dark chocolate then rolled in peanuts and pecans, then drizzled in more chocolate.  It was suggested that I not hold it horizontal, as the pressure on the stick was too great, causing an immediate bend in the stick–and it was on a sturdy stick!  This one definitely gets the award for heaviest Food on a Stick.

As seems to be the case with all of my 52 adventures, Mark & John find some crazy food to share.  First it was donuts, then the Crazy Apple.

This was one of very few FoaS items that did not get completely consumed.  It was simply too much food and a bit awkward to eat.  But both Mark and John said it was delicious!