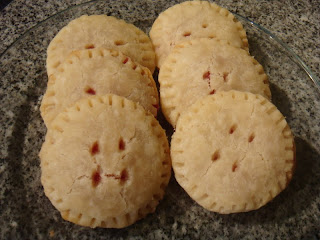 My friend Deanne came over to make pie during my week-long pie baking marathon.  She is the first person I really shared my kitchen with last year and it was a new experience for me. I’m used to my kitchen being my domain, there’s not usually anyone to dance with while I bake. I’ve discovered I enjoy having baking company! 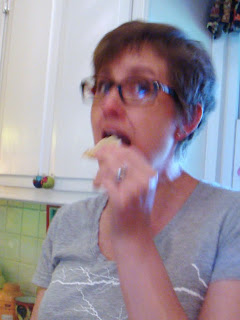 Deanne always brings great baking ideas and a well-packed stash of ingredients and baking goodies to make it happen.  This time around she mentioned she is not good at pie crust.  I hoped to change that thinking with a good gluten-free pie crust and I think I did!  This pie crust is super easy, works every time as long as you use COLD water and butter and keep the crust cold when working with it.

Another great thing about this pie crust is the unlikelihood of overworking it.  When I was a gluten eater, I worked with pie crust as though I had one shot to roll it out, one chance to get it right.  If I overworked the dough either mixing it with the pastry cutter or by rolling it too many times, I risked the gluten really taking hold, making the dough tough and not so tasty, the terrific flakiness would be lost.  I had it down, though. Making a terrific pie crust has been in my skill set since my teen years when my home economics teacher Sylvia Anderson taught me the ins and outs of good pie.

Then when I removed gluten from my diet, I worried.  I worried that good pie crust was a thing of the past.  Now, without gluten, it is EVEN EASIER!  That’s right, dear readers, making a pie crust without gluten is even easier than with gluten.  No kidding!  This crust is forgiving, can be rolled a few times if necessary.  I prefer rolling it only once to leave the chunks of butter visible in the dough, but when I have re-rolled, it’s still a delicious buttery, flaky crust that convinces the pickiest of pie eaters.

So here you go, my favorite gluten-free pie crust.  This is the dough I use to make 9″ and 10″ pies, mini pies, poptarts, hand pies and these adorable little button pies. 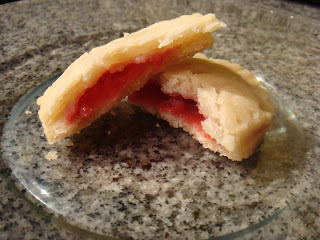 Gluten-Free Basic Pie Crust
Pie Crust
2 1/2 cups of my favorite gluten-free  flour blend
1/4 teaspoon salt
3 T. granulated white sugar
1 t. guar gum
1/4 cup shortening (I use Crisco sticks)
1 1/2 sticks of Earth Balance Vegan Buttery Sticks, cold and cut into small pieces
1/2 cup very cold water* (I believe this is the trick to a good pie crust, water and butter must be cold)
*I start with ice water and measure out 1/2 cup after the water has been with ice for a few minutes.

Mix flour, salt and sugar together.  I do not sift the rice flour blend, however if you were substituting all-purpose flour, I would sift.  Add Crisco and break up with a pastry cutter.  Next add the butter and mix with pastry cutter.  Begin adding the cold water, just a little at a time until you reach the texture of pie crust dough.

To make Button Pies, use a biscuit cutter or 3″ circle cutter.  Place half of circles on a Silpat-lined cookie sheet.  Brush edges with egg wash. Spoon a heaping tablespoon of your preferred filling on center of circle. Cover with another circle of dough.

You may either press the edges together softly with your fingers or use a fork to crimp them shut.  I prefer a fork.  To make the button-hole appearance in these tiny little pies, I use the point of a knife to poke four little holes.  These also serve as vents when the pie is baking, so even if you don’t want them to look like buttons, you need to add some sort of vent holes in the top.

Brush top with egg wash and sprinkle a bit of sugar.  Bake at 350 degrees for 15-18 minutes, until lightly brown.  These may be served warm or at room temperature.  They also freeze and re-heat well in a toaster oven.

For the pies pictured in this post, Deanne made a microwave raspberry jam.  I neglected to get the source of her recipe. It included fresh raspberries, sugar and cornstarch cooked in the microwave, quick and easy.  I can also tell you it was divine with a nectarine.  I used a bit of leftover pie crust to roll out one hand pie, filled the dough with a heaping spoonful of raspberry jam and a few thin slices of nectarine.  What a tasty combination!

I like to fill button pies with just about any jam, jelly, marmalade, fruit or nut butter and fresh fruit I have handy.  The pie crust recipe above freezes well.  I recommend splitting one batch into a few discs (split one batch into 4 discs, each about 1/2 a regular pie) and thaw one out when you want to make 2 or 3 hand pies.  It’s a quick and easy way to have homemade pie any day of the week!

« Sweet of the Week #22i, Chocolate Kumquat Icebox Pie with Sour Cream Crust
Apple Pie and Cherry Pie with Renee, E and A »