When my friend Laurie suggested Jagermeister as an ingredient for this year’s 52 project, I was concerned.  I’ve never been a fan and wasn’t sure how to incorporate it.  Then it was Autumn, I was getting down to the nitty-gritty of the ingredient list and realized the black licorice-like flavor would go great with pumpkin! The Jagermeister cannoli was born!

You’ll need to make vegan/dairy-free ricotta for the filling.  Here’s the recipe I use.  You will also need cannoli forms or pieces of a dowel to wrap the cannolis around for frying, as well as a cutter to cut the dough.  Here we go… 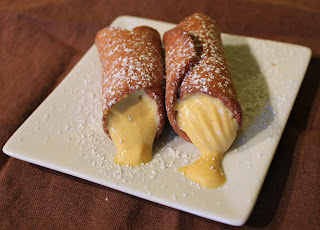 Place flour, guar gum and salt in mixing bowl. Form a well in the middle, mix in eggs and Earth Balance.  Blend all ingredients using a pastry cutter. Add Jagermeister a bit at a time until the dough comes together.  I always use the full amount, whether using Jagermeister or rum.   Divide into two equal balls.  Roll each ball out between two sheets of plastic wrap (this eliminates the need for flouring the surface) until it is approximately 1/16″ thick and cut with a 4″ circle cutter.  Roll each circle out into an oval and wrap around the cannoli form. Brush the edges with egg white and gently press to seal.

Fry in 350 degree oil.  Do not fry more than 2 or 3 at a time, or you will reduce the oil temperature.  Fry until just golden, a minute or so. Place on paper towels until cooled.

In a medium bowl, mix together all ingredients using a hand mixer.  Mix until well combined and refrigerate for 2 to 3 hours before using.

Using a pastry bag or a frosting tool, fill cannoli shells with cooled filling immediately before serving.  Sprinkle with powdered sugar and serve.

« Sweet of the Week #34i and #35i, Pumpkin Pistachio Bundt Cake
I Ate Here: Eating My Way Across St. Louis »