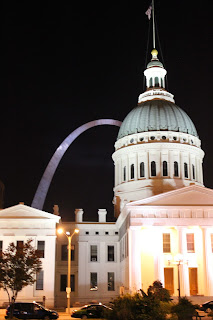 I worked in St. Louis last week with my husband (click here to see what we were doing) and had three terrific gluten-free dining experiences I wanted to share with you.

There was not a lot of time for me to plan this trip.  I’ve been on the road quite a bit the last few months and planning in advance just hasn’t happened.  Each of the three nights I dined in St. Louis, I was flying by the seat of my pants, a scary way to eat gluten-free.  I depended on recommendations of my friends in St. Louis, some of the suggestions made mere hours before eating so there wasn’t a lot of menu research and no phone calls to the restaurants.  What could have been bad was instead an incredible treat, three amazing meals with three groups of friends in three distinctly different restaurants. Gluten-free has come a long way and St. Louis is way up at the top of my list of dining destinations now. 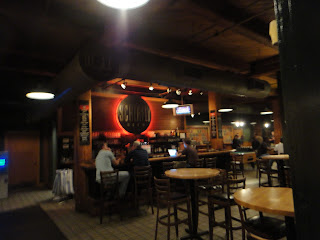 The first night my friend Jill suggested we meet her and her husband Ron at the Schlafly Tap Room.  It was just about a mile from where we were working so I walked there with my husband, strolling through the bustle of businesses and restaurants on Washington Street.  I knew going in this may be a restaurant where I would choose to not eat, but instead enjoy the company of dear friends and eat something from my travel stash back at the hotel. Eating at the tap room of a gluten-full brewery didn’t sound particularly gluten-free friendly.  I quickly perused the menu and asked the server on his first visit to our table if he could assist me with ordering gluten-free.  He darted across the small restaurant to grab a gluten-free menu.  Yes!  Their gluten-free menu was extensive and created in the simplest way I have seen:  they used a Sharpie to mark through the items that are not gluten-free and had also notated items that could be deleted from an item to make it gluten-free, such as croutons or a sauce. 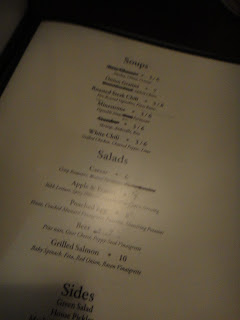 I had the Vegetable Vindaloo, a spicy curry dish of veggies and pepitas over basmati rice.  Even though I had only snacked the entire day and was very hungry, I wasn’t able to eat the entire dish.  I took leftovers back to the hotel.  I am shameless in telling you I re-heated them at midnight, too good to stay away from overnight.  Our hotel room smelled of this lovely dish for the remainder of our stay. 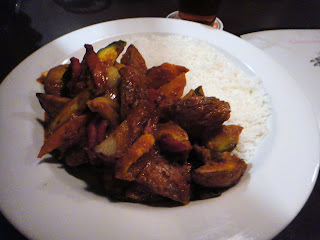 The next night my husband and I dined with Stefani of  Cupcake Project and her talented husband, photographer Jonathan Pollack.  There is always an ease in dining out with a fellow food blogger, never a shortage of things to talk about.  Add to that a photographer to share tips with me and it became a perfect evening! We ate at Pi, a local pizza restaurant.  Several people had told me they have gluten-free crust and dairy-free cheese so I felt comfortable eating there.  What I didn’t know was that President Obama’s favorite pizza is Pi and he was in St. Louis that evening.  One of our first questions to the gal who seated us was whether the president had been in that day.  She said no, but there had been carry-out.  It must be good, right?  Yes!  We ate at the Central West End location, a beautiful space with an eclectic mix of chandeliers and furnishings. 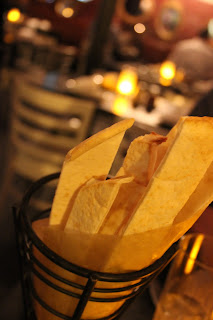 I ordered hummus and asked if I could get sliced vegetables instead of the flatbread.  The fella taking our order said they could slice a gluten-free pizza crust for me, so I could actually have hummus with bread instead of veggies.  Such a treat.  I ordered a Berkley pizza with Daiya cheese. When my pizza arrived, it looked incredible, topped with mushrooms, onions, kalamata olives, red bell peppers, garlic and zucchini.  And the taste?  Well, every bit as good.  Without a doubt, this is one of the best gluten-free pizzas I’ve had.  Our server didn’t divulge where their gluten-free crust comes from, but it is not made in-house.

For dessert, we had gluten-free, vegan chocolate chip cookies with a super sweet frosting sandwiched between them.  Stefani and Jonathan sent their second cookie back to the hotel with us and again…midnight leftovers.  Two days in and I was starting to wish I had pants with elastic.  St. Louis was proving to be a great town for gluten-free dining. 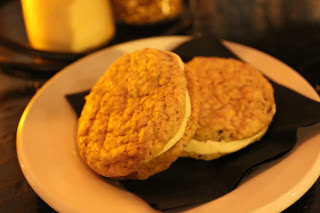 Speaking of leftovers, Pi had the coolest pizza box.  The lid is perforated to become four plates.  What remains of the box folds into a triangular box that will hold about half of a pizza.  It’s a delivery box, serving dish and leftover container all in one!

One the third night, we joined our friend Rob, also known as Babaloo, his wife Doris and their daughter Cori for dinner at Fountain on Locust.  What a beautiful space.  It is a lovingly restored Art Deco themed space with highly-touted ice cream and toppings.  My husband and I sat at the bar while we waited for our dinner companions and thoroughly enjoyed watching the staff prepare drinks and ice cream creations.  I had never seen a banana flambeed for use in a banana split.  While sipping a Hemingway, a cocktail of absinthe and bubbly, I chatted with one bartender about Burning Man, another about who the “other” member of Wham was.  Not only was I discovering great food in St. Louis, every restaurant employee we encountered was friendly, helpful and fun to be around.  I wish for more cities like this! 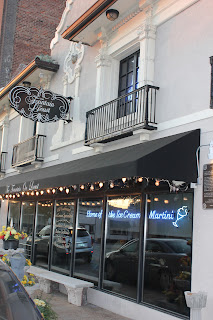 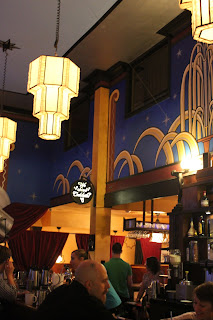 For dinner, I had dill pickle soup, a potato soup with crushed dill pickles and a dollop of goat cheese and dill floating on top.  I would order a bowl, not a cup next time.  It was delicious.  Cori thought so, too! 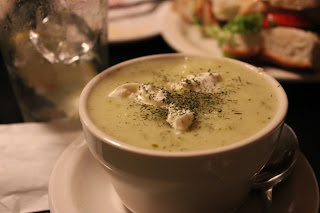 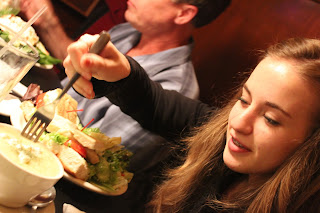 I also had the famous birdseed salad, which included sunflower and pumpkin seeds, nuts, apples and (this was my favorite part) a brulee’d apple slice on top.  It was a perfectly balanced salad with a light poppyseed dressing. 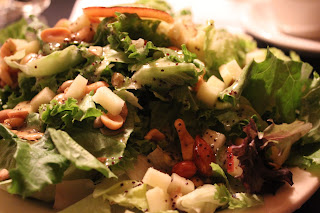 Because Fountain on Locust is famed for their ice cream, I indulged in a bit more dairy.  They offer the World’s Smallest Ice Cream Cone (John inquired if it was ice cream on top of a bugle, in reality it’s a bit bigger) and the World’s Smallest Hot Fudge Sundae.  I chose the sundae and it was the perfect size for me.  I would like it if more restaurants offered tiny desserts! 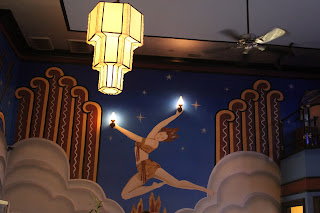 While not nearly as difficult as eating gluten-free, my husband is vegetarian and ate incredibly well at all of these restaurants.  At Schlafly, he had a falafel sandwich.  At Pi, he had a deep dish pizza stuffed with veggies.  At Fountain on Locust he had a super creamy grilled cheese with apple slices.  He’s still talking about that sandwich and trying to replicate it at home.

While I didn’t eat there, I wanted to share with you my observations from the event space where I was working in St. Louis, the Americas Center.  Levy is the caterer for the property.  While adding final details to our sculpture, I had the opportunity to speak with a couple of staff members, including the executive chef.  It was impressive to see every dish on the buffet clearly labeled: gluten-free, vegetarian, vegan, lactose-free, etc… I also noticed Kosher buffets as well as a Registered Hindu Vegetarian buffet.  During the staff announcements, the 150+ servers for the evening event gathered to hear the menu announced.  During the announcements, my husband said, “Have you heard how many times they have said gluten-free?!?”  Yep, I heard it.  Specifically, I heard that all but two dishes on the entire buffet were gluten-free.  There weren’t just a couple of offerings, but nearly the entire buffet was gluten-free.

I asked the executive chef if this was standard for their events.  He said it was and then said to me, “You know, gluten-free is really important to those who are required to eliminate it from their diet.  They get very ill if they consume gluten.”  I know, boy do I know.  This was one of the most reassuring conversations I have had regarding gluten-free food in the special event arena.  I’ve had the privilege of working in several Levy properties and am always impressed with how far they go to feed their guests, how educated their staff is, but this was extraordinary.  I hope the rest of the industry follows suit! 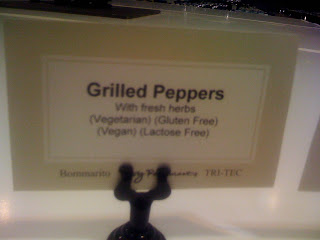 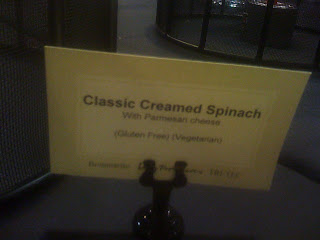 One of the dishes not gluten-free on the buffet was a smoked cheddar macaroni and cheese with a barbeque potato chip crust.  I joked with the chef, asking if he could whip up a gluten-free version for me.  He said he would be happy to.  I was not dining at the event, but that he was willing to go the extra step really tickled me, not just because I adore chefs who will cook for me but because I love the fact that anyone in my position would be able to eat there. In the days since being home, I’ve made my own gluten- and dairy-free version of this. Watch for a recipe soon!

So there you have it, three evenings of delicious gluten-free, vegetarian food in St. Louis and a peek at a convention buffet.  If you have other recommendations in St. Louis, I’d love to hear them!

Fountain on Locust on Urbanspoon: