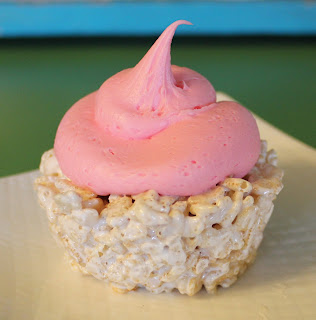 I’m all about Valentine’s Day right now.  If it’s pink and red, I’ve stuck it to the wall, used it to decorate the kitchen table and cooked with it.  Not even a container of pink frosting could evade me.

I made these adorable rice krispie treat cupcakes and topped them with ready-made (gasp!) frosting.  I spent most of an afternoon exclaiming aloud to anyone who would listen, “Have you had FROSTING on top of a Rice Krispie Treat?!?  You HAVE to try this!”  Sure, a sugar coma will follow but since this recipe only makes 6, you don’t get to indulge in many of them anyway.  Moderation, right? 😉

While I could have made these for even less moolah with a jar of fluff from the store, I chose to make homemade marshmallow fluff.  I based the fluff on this recipe from Jasmin at 1FineCookie.  Remember when I made those S’more Stuffed Strawberries?  It’s the same delicious marshmallow fluff.  Once you try this, you’ll be hooked.  It’s sticky, ooey-gooey and makes the best rice krispie treats I’ve ever had.  Thanks, Jasmin, for creating one of my very favorite sweets.  Love this marshmallow goodness!

In bowl of stand mixer with whip attachment, white egg white and cream of tartar until soft peaks begin to form.  Slowly incorporate 1 1/2 t. sugar.  Whip only to incorporate, you don’t need stiff peaks.  Let rest in bowl while you do the next step.

Return to your mixer.  Turn it on low and slowly drizzle in the molten sugar mixture.  Once all is added, turn the mixer on high and whip for 4 minutes.  Turn off, add vanilla extract and whip for two more minutes.  That’s it! 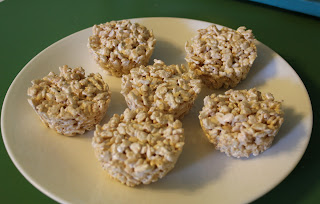 Prepare 6 cavities of either a silicone cupcake pan or a regular cupcake pan sprayed with non-stick spray.

In a large microwave-safe mixing bowl, melt the Earth Balance butter in microwave.  Remove and stir in the marshmallow fluff.  Stir to completely incorporate.  If it is still too thick to incorporate the cereal, pop into microwave for no longer than 30 seconds.  Stir in the rice krispies, mixing until well combined. 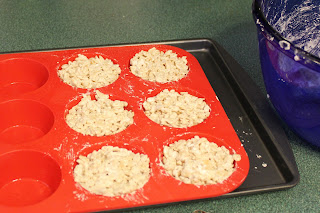 Place mixture into each of 6 cupcake cavities.  You may allow these to set up at room temperature or if you are in a hurry, place them in the refrigerator or freezer. 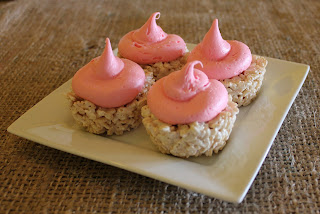 I topped these with 1/2 of a can of Pillsbury frosting.  I had a good coupon, it’s labeled gluten-free, so I thought I’d give it a go.  It’s pretty good!  I usually make my own frosting, but I would use this again.  It only took about half a container of whipped frosting for 6 of the rice krispie treats. 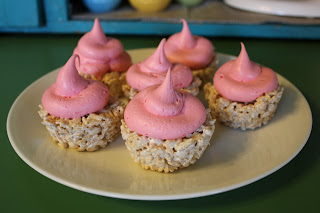 « My Thoughts on Paula Deen and Diabetes
cupcakes, cookies & pie, oh, my!: A Book Review »