Did you read the title of this post and think, “Oh, good grief!  How many different chia puddings can there be floating around?”  Perhaps that was followed by, “Oh, please. I’m over this in-a-jar thing. That’s so last year.”   You might be out of luck with this one.

See, here’s the thing.  My chia pudding isn’t earth shaking, it’s not a whole lot different than the others you’ve seen floating around.  Except for one ingredient.  I’ve used a rich, dark honey molasses for sweetener.  It’s got a sweetness unlike anything I’ve tasted before.

And about those jars.  Well, one of the processed foods that had a hold on an unnamed fella I cook for was pudding cups.  You know, those little plastic cups full of dairy, artificial flavorings and who knows what else that Sandra Lee scoops out to use for desserts on her barely-homemade show? Yeah, those.  They were in our refrigerator often, a favorite snack.  I had to find a way to make a healthier substitution.  Chia pudding in jars keeps well throughout the week and hits the spot when the craving is for pudding. A glass jar filled with pudding is as close to a plastic pudding cup as I’m gonna get. 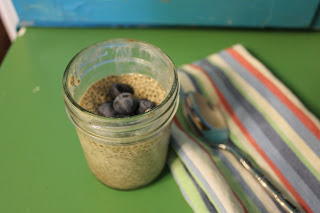 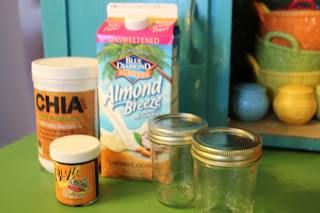 Chia Pudding in a Jar
You’ll need two 1/2 pint jars (eight ounces) with lids.  Each jar will hold TWO servings.  Or if you prefer, you can use four jars that each hold four ounces, the squat little jars that are about cupcake size.  Each of those makes one serving and you’ll need to use your math savvy skills to halve the recipe below.  It does that easily.

*About the  honey molasses:  Remember when I talked about visiting Paradise Meadows farm in Hawaii?  Honey molasses is one of the goodies I brought home from there.  The folks at the farm tell me it is the incredibly rich tasting honey that is released from gently heating the beeswax that covers the honey frames just to the melting point. The flavors and color of the honey are concentrated in the process, resulting in a pure, natural honey with an amazingly intense flavor and the dark color of molasses.  It’s delicious!

Lately I’ve been sprinkling fresh blueberries on top of the pudding.  They are in season in my area right now and are very tasty with the pudding.  Give me another 6 weeks or so and I’ll switch out to Colorado peaches.  I’d love to hear what fruit you like to use with this chia pudding recipe!