I rarely do product reviews.  I’m quick to share my favorite ingredients in a recipe, but not often do I tell you about a product from the store just for the sake of telling you I think you should buy it. 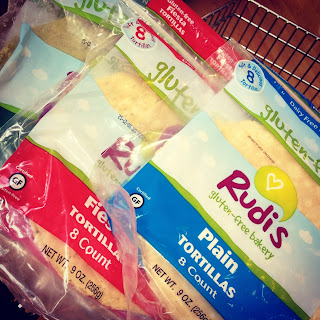 But Rudi’s tortillas, well, I think you should buy them.

I spotted these at Nature’s Pantry in Independence, MO.  I had read about folks in other parts of the country trying these but hadn’t found them anywhere near me.  When I did find them, all three varieties jumped into my cart.

So what’s the big deal, you ask? Well, they don’t fall apart.  The tortillas I used to eat (until they turned out not to be good food for my life, hint hint…failed gluten test) would fall apart if I tried to roll them.  Then I tried several other brands and sometimes they would be in multiple pieces before I ever got them home.  So I just stopped eating flour tortillas and put everything on a corn tortilla or in a thinly sliced jicama.

The other really great thing is that these actually taste good.  I like the Fiesta best, but the plain and spinach are also tasty.  The plain has a bit of sweet flavor to it, which I don’t mind one bit. They aren’t glue-y in my mouth and have a flavor that’s good enough to eat alone.

So far I’ve done just that, eaten them alone. Nothing on them.  That’s something I didn’t think I’d do ever again.

I also made black bean and sweet potato quesadillas with them. 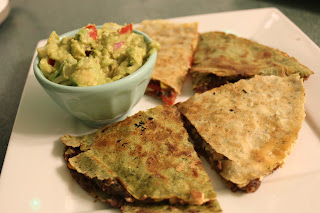 I made bean and zucchini burritos with them. 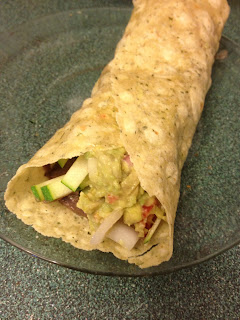 I put some raw vegan not-chicken salad goodness in one for a wrap.  Pretty much anything that comes out of my kitchen is wrapped in a tortilla right now.  Yesterday it was cashew butter and sliced banana in a tortilla.  Everything is better in a Rudi’s tortilla.

Now that I’ve told you all about my love for Rudi’s tortillas, will you tell me what you love putting in a tortilla?  Tell me, I wanna know…

Full disclosure:  I paid for my own tortillas. I used a coupon even! The opinions expressed are my own.  But you knew that. 😉