When I started teaching baking classes, I needed a way to tell the folks in my classes how I came to be a gluten-free blogger, baker and recipe developer.  These No-Bake Donut Holes helped me to explain…

See, I was a donut blogger.  I was writing 52 Donuts when my amazing doctor said no more gluten for me.  (Is donut blogger really a title?  It’s not like there are oodles of us writing only about donuts, but that’s what I was doing.)  I tried all of the store-bought gluten-free donuts I could find and none really tasted like a donut from a donut shop to me.  I had just about given up on ever having a donut again. Don’t worry, I’ve since bought and baked many terrific gluten-free donuts…

While searching for a good gluten-free donut, I was introduced to raw vegan desserts.  I know, that term is either unappealing or intimidating to many.  What I found was that in many cases, I could whip up a dessert in no time and it would be delicious, plus it would  work with my dietary restrictions. I thought the whole world would be as excited as I was at this discovery!

So at the first few baking classes I taught, I would whip up a batch of these and share with the students while introducing myself and telling them about my journey to gluten-free baking/unbaking.  It’s always great to start off a food class with a nibble anyway and the donuts, albeit raw vegan ones,  tied in nicely with my journey to finding gluten-free.

But many people would pass when these delicious donut holes were shared.  They didn’t want to eat anything called RAW or VEGAN.

Fast forward two years and I hear the lovely Amber of Almost Vegan is going to be on a local news station talking about her new cookbook.  They were showing her Famous Five-Minute Blondies, but instead of saying they were RAW VEGAN, they kept saying NO BAKE.  I was miffed, annoyed, why not call it what it is?!?  Then it hit me, they were no bake.  They were also raw vegan but calling them no bake would make them much more interesting to those with a less-than-open mind when it comes to eating. I’ve since softened my stance on this. I get how this could work for many more people and that’s really my goal, to help more people move in the direction of food that works for them.  I don’t fit into any one single dietary box and doubt you do either.  So why not soften the name on these yummy treats, too?

In upcoming months, you may notice more NO BAKE or UNCOOKED recipes here and at Johnna 52, where I share non-sweet creations.  I’m learning, studying, diving in and will surely have lots to share with you.  But for now, I’m sharing my favorite no bake/raw vegan sweet with you. 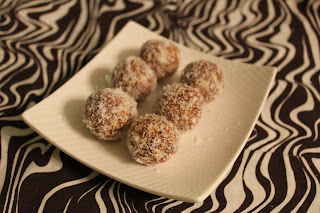 In bowl of food processor, place dates and turn on high.  Let process until the dates form a ball.  Remove the ball from the food processor and place in a large mixing bowl. 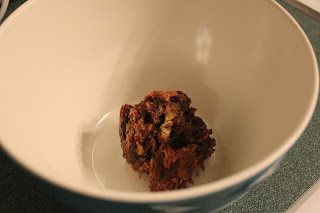 Next place your dried fruit into the food processor.  Again, process until a ball starts to form.  Remove from the processor and put it in the mixing bowl with the dates. 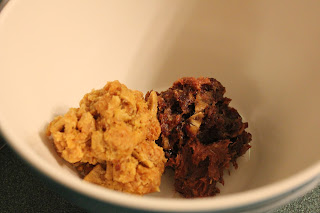 The last step with the food processor is the nuts.  Process on low just until they are chopped well, don’t over process into a nut meal or butter.  Put the nuts with the  fruits in the mixing bowl. 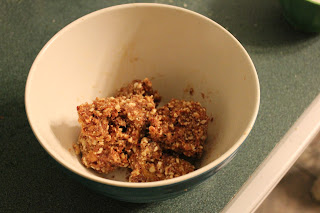 Since this makes 24, I split the mixture into half, then half again so I have 4 clumps on the mix.  Each of these clumps will make 6 donut holes.  Splitting it like this helps me keep the balls all similar in size. 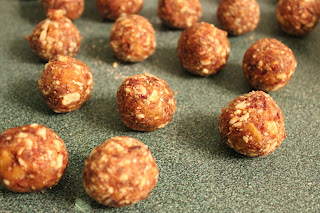 With your hands, roll into round balls.  Roll in the remaining 3 T. of coconut.  You may eat these immediately or refrigerate overnight to allow the flavors to combine.

Here’s a tip to remember about this recipe:  It’s always 1 cup dates, 1 cup nuts and 1 cup dried fruit.  If you keep that ratio consistent, any combination will pull together.  It’s so much fun trying out different combinations.  I get giddy when I see a new dried fruit at the market, knowing it will soon find its way into these donut holes!

Umbrella Drinks:  This one reminds me of a tropical vacation!  Macadamias, Just Mango , dried baby pineapple and Flat Banana, all from Trader Joe’s.

Apple Pie:  Dehydrated apple rings, pecans or walnuts and a dash each of cinnamon and nutmeg

I hope you enjoy these as much as I do.  And you can call them anything you’d like, raw, unbaked, no bake, whatever works for you.  Just enjoy them, that’s the only rule! 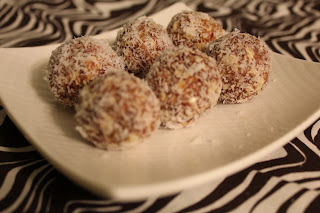