Plain Ol’ Vanilla.  Well, actually there’s nothing plain or old about vanilla, it’s a very intriguing flavor.  There’s a lot to be said about a good vanilla cupcake, no exotic flavor combinations, just the basics.  And it’s tricky to perfect.

I started my quest to perfect a vanilla cupcake with The Ultimate Vanilla Cupcake recipe from Stefani at Cupcake Project.  Stefani assembled a team of 50 Cupcake Explorers to test her recipe last year and worked through several variations of the recipe to attain a high approval rating from her team.

While I don’t have a team of Cupcake Explorers assembled, I did bake several variations Stefani’s recipe.  I made them gluten-free, dairy-free, egg-free, vegan. I tried replacing gluten-full flour cup for cup with my gluten-free flour blend.  I tried several variations on flour combinations, nut meals, dairy and egg substitutes.  After two weeks of trial and error, I finally baked up a version that I’m tickled to share.  I shared with no fewer than twenty friends, asking for feedback.  I got approval from most and the only complaint was from my favorite fella, who was upset to hear the latest batch went to a birthday celebration and he got only one.  My only complaint is the color isn’t as white as I’d like, since I’ve used coconut sugar and flax meal.  It’s an easy trade-off though for a terrific vanilla flavor and a texture that rivals any gluten-full, non-vegan vanilla cupcake I’ve tried.

That last batch was topped with a Meyer Lemon Buttercream frosting, which suits a Plain Ol’ Vanilla cupcake really well.  I’ll share that recipe with you, too.  Enjoy! 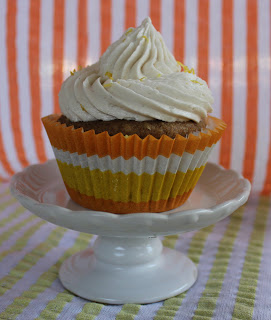 With mixer on low, add in Earth Balance.  Mix until a slightly crumbly texture is reached.

Once mixed, add wet ingredients to dry in the stand mixer bowl.  Mix on medium just until combined.

Fill muffin tins with a scant 1/3 cup of batter.

Place muffin tins into oven.  Immediately reduce temperature to 325 degrees.  Bake for 20-22 minutes.  A cake tester or toothpick inserted into center will come out clean when done. 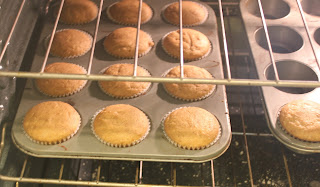 Cool on a baking rack completely before frosting. 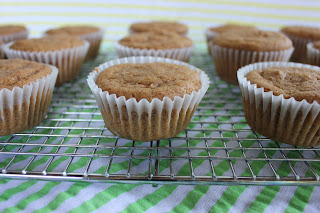 *This frosting works with any lemon, however I like the flavor of a Meyer lemon, the combination of lemon and mandarin orange.

In bowl of stand mixer, whip Earth Balance until it is light and fluffy.  A cup or so at a time, add the powdered sugar, mixing each time until it is incorporated with the Earth Balance.  Once all sugar is added, mix in the salt, lemon zest and vanilla bean paste.  Add in the lemon juice one tablespoon at a time until you have the desired consistency.  I use the entire 1/4 cup.  Whip for 4 to 5 minutes to make the frosting light and fluffy.