I took a few days off recently to go snow skiing.  I’ve been skiing for 20+ years, but my favorite fella is relatively new to skiing.  Skiing on a gentler area of the mountain with him gave me lots of opportunity to observe kids and adults in ski school. 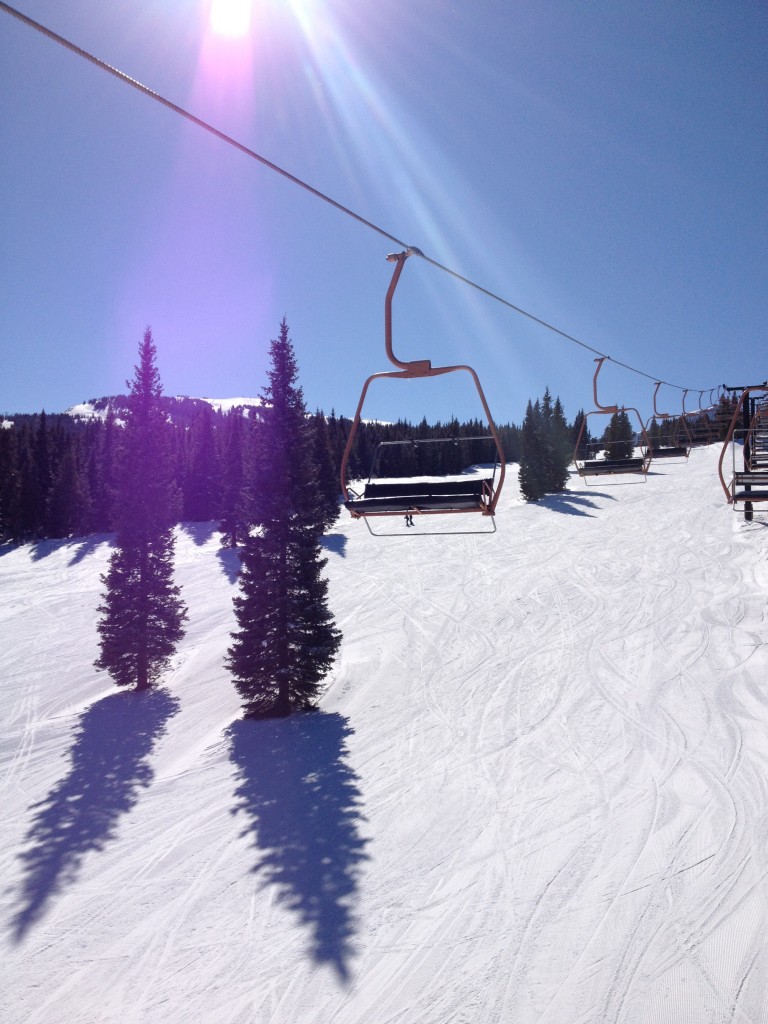 Maybe it was the thin air above 10,000 feet making me loopy, but in watching kids as young as 3 learn to ski, I learned a few lessons.  Not lessons that apply just to skiing, but lessons that apply to life and more specifically, to the challenges of eating healthier foods or eating with a dietary restriction.

I saw this ski instructor loading a 3 year old up on a chair lift.  Chair lifts can be scary, but apparently not to 3 year olds.  Well, at least not until you get to the top of the mountain.  Then sometimes you need a little assistance.  A handy loop on the back of this cutie’s jacket made it easy for the instructor to pick her right up and set her down on her skis at the top of the lift. 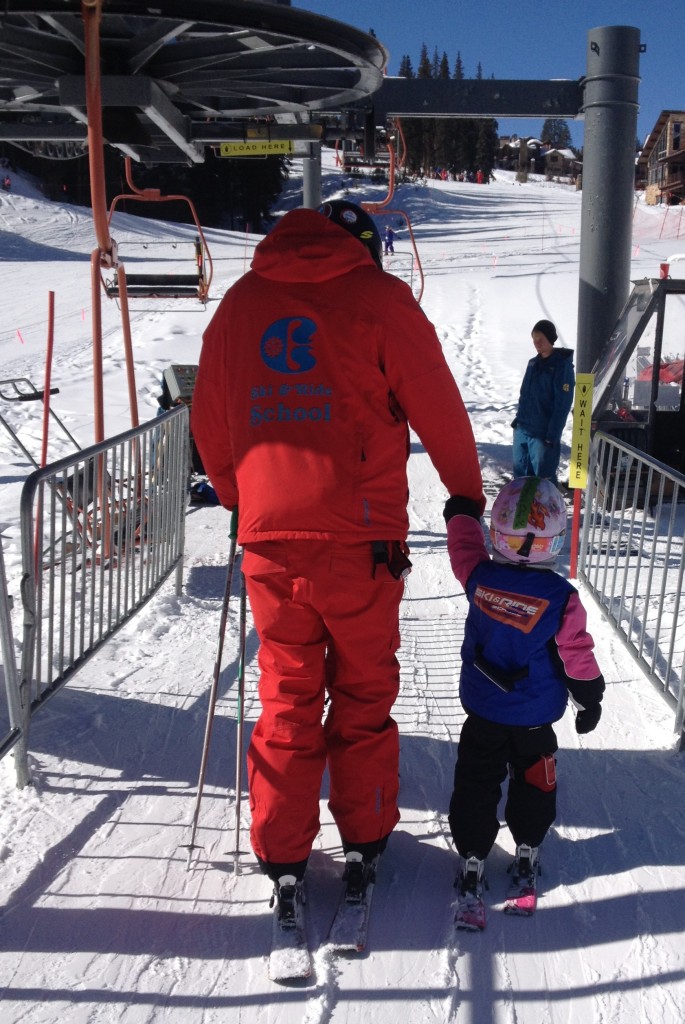 From the chair lift, I saw another little kid, surely under 5, in a group class.  The instructor was waiting just a bit down the mountain.  First, the kiddo was skiing great, facing forward, yet very quickly got turned around backwards.  Rather effortlessly, he was gliding down the hill backwards.  The entire class, kids and the instructor, kept cheering him on!  “You’ve got it, keep coming this way!”

Boy, did I recognize this position. Sometimes I’m moving the right direction, down the mountain or toward the finish line, yet I’m looking the opposite direction.  And there’s my tribe, my wonderful group of encouragers, keeping me on task, cheering for me, directing me to my goal.  I think this may be the most critical element in making dietary changes, having folks who will cheer you on even when you are looking the opposite direction.

And then there were the tumbles.  People learning to ski, and even more so, people learning to snowboard, fall A LOT.  The little kids on the slopes rebound quickly, pop right back up and head on down the mountain.  Some folks are a little less reluctant to try again, maybe they’ve already fallen 50 times that day, maybe snowboarding isn’t coming naturally to them.  But the important thing is that they get back up.

I’ve tumbled, stumbled and fallen a lot in my quest for health and on my weight loss journey.  Some days, I pop back up like those little kids learning to ski and get right back to it.  Other times, I’ve taken much longer to get back on track.  I’ve considered trudging down the ski slope in clunky boots instead of learning to ski.  Guess which method is more effective?

The last little tidbit I learned came on the very last day of our ski trip.  My favorite fella doesn’t really dig snow skiing.  It’s getting easier for him and he falls a lot less these days, but I’m never certain he enjoys it as much as he tolerates it because I enjoy it.  So on the final day of our trip, he said, “I’m gonna learn to snowboard today.”  WHAT?!?  It’s hard, many folks spend their first 3 days falling and falling and falling some more.  How much could he learn in half a day and how frustrating would it be?

I went skiing by myself for awhile and after a few hours, skied over to where he was taking a class.

Imagine my surprise–he was upright.  He was making smooth turns and it was obvious he was actually enjoying it!  So after three years of trying to ski and not really digging it, he tried something slightly different and found his nitch. 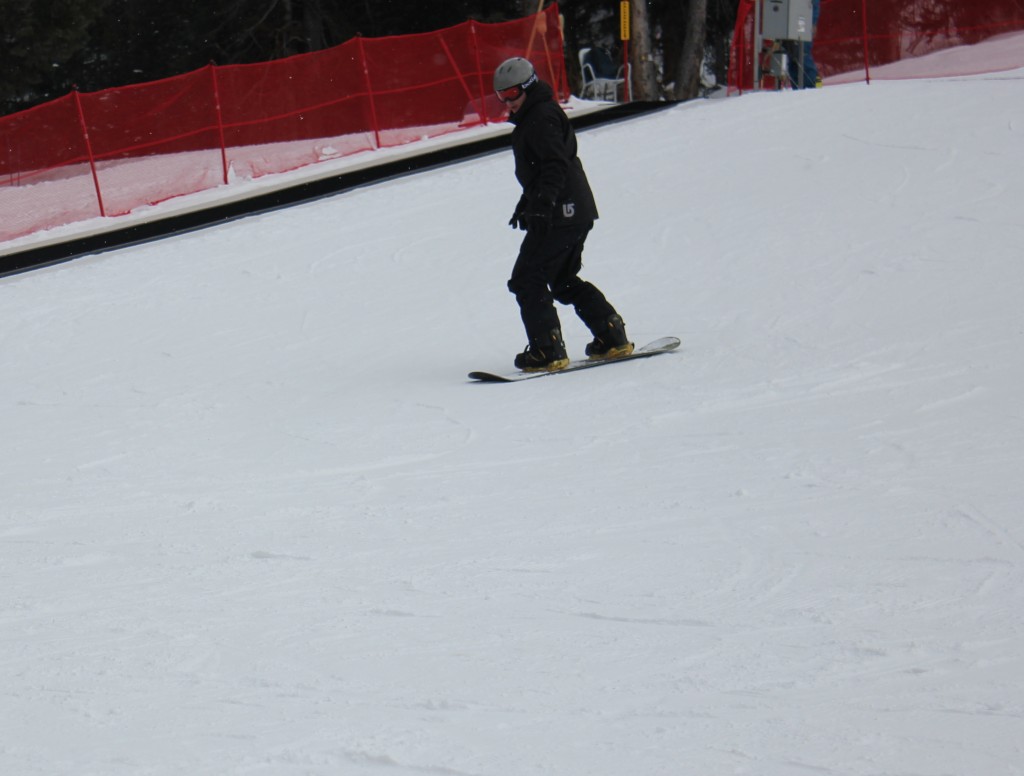 I know about this.  I’ve tried and tried to stick with eating plans that were overly restrictive but promised to make me healthier, tried the current trendy “lose weight fast” plan and struggled.  It wasn’t easy, wasn’t enjoyable, didn’t work for me.  Not that everything has to be easy or enjoyable, but I know now that I’m much more likely to stick with a plan if it is.  The lesson, in short, if you are doing something that isn’t really working for you, change it up!

So that’s it on my deep thoughts from ski school.  I’ve returned to lower elevation and am all set to put some of the lessons into play.  And the next time I’m in the mountains, I may just learn to snowboard…

« I Ate This: Starlite Cuisine Vegan Taquitos
Starting the Week Off With a Spark, Sparky Juice! A Green Juice Recipe to get you moving… »