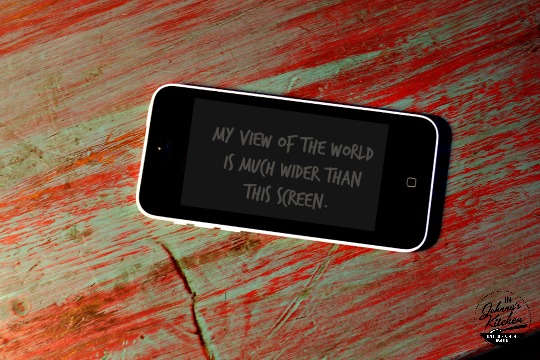 On Sunday I went with my favorite fella on a short road trip to go to a concert.  If you follow me on Instagram, you’ve figured out by now we go to a lot of concerts, take in a lot of live music.  I’m often sharing photos, even an occasional video snippet of a show.  It’s me, trying to capture the moment on the 4-inch screen of my phone, which also becomes the size of my view while I’m shooting photos or video.

On our four hour drive to get to this concert, we had a conversation about my phone and concerts.  I had talked to a dear friend earlier in the week about using the voice memo app on my phone to record a song or two, because I very much wanted to share the experience wit her, re-live it later.  I then decided  on the car ride I could maybe just not do that and instead focus on being present at the concert.  Then my fella, who is a full foot taller than me, said he gets tired of looking at the screens on phones while at concerts–his view is that of other people’s phones who are taking pictures or shooting video throughout the entire concert.  Even for someone tall, it’s distracting and interferes.  He was encouraging of my plan to put my phone away and focus on a concert we had hoped to catch for a long time.

Then the conversation turned…we talked about how it feels for us (we are both performing artists in one capacity of our lives, sculpting with balloons) when we attempt to connect with our audience and look out only to see phone screens.  It’s particularly challenging when it’s a big tablet screen–imagine trying to assess your audience’s reaction, trying to connect, with someone who is hiding behind an iPad they are using to shoot photos of you.  Is that woman texting a friend to tell them how cool the artist in front of her is? Is she Facebook’ing the photo of the sculpture I just created, all while missing the creation of the next one that is even more amazing? Is she even interested in what’s happening, am I boring her? From my spot on the stage, it sometimes feels like people are watching a TV show instead of a live performance.  They are watching me through a screen and missing out on the chance to connect.  And I miss their energy, which fuels my performance.

And so it was agreed, I would take only a couple pics, no video.  I would be totally present at this concert.  It somehow felt very freeing, like I could just do one thing and that was to have one heckuva good time.  I wanted to see the concert firsthand, not from behind my phone.

Moments before the concert started, a member of the performer’s crew took the stage with his phone in hand.  What he said next was the impetus for this post… “Tonight’s show is bigger than this screen,” he said, while holding the phone out.  Gesturing with his hands to indicate the entire theater, he said, “It’s this BIG!” We were encouraged to live in the moment, to make memories instead of photos. He also stated that they were traveling with a professional photographer who would take photos of the show and make them available for free on the artist’s site.  And sure enough, the very next day beautiful photos were available, better than anything I would have taken with my phone anyway.

So did I take photos?  Yep, just a few, as did many around me.  You can see a little photo collage I made on Instagram.  My favorite photo of the evening?  A shot of the theater marquee taken before the concert ever started.  I could write for hours about the memories of that concert, but it won’t be accompanied photos or videos. And my view of the concert?  Much bigger than usual because my view wasn’t impeded by other people’s phones or even my own.

Here’s my soften suggestion for the week: Widen Your View.  Put the phone down, enjoy the experience.  You can text your friends after you make awesome memories, you can take a photo or two, not 120. You can skip shooting video and instead let your mind capture it.  I promise you, it will be more enjoyable.