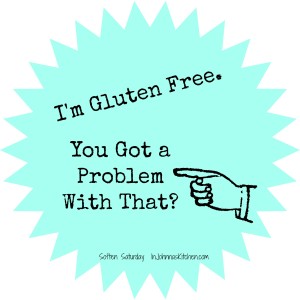 There’s been a lot of chatter on-line, in the newspaper, even on Good Morning America this week about the validity of Non-Celiac Gluten Sensitivity (NCGS).  It’s everywhere I look this week.  Initially I got fired up, even spouted off on a friend’s Facebook status after he declared gluten-free food a marketing scam.

All of this chatter was brought about by one study of thirty-seven people. 37.  That’s so incredibly conclusive, right?  (Did you hear my eyes roll?)  This one study declares there is no such thing as NCGS.  I could rant for hours about this ridiculous study, how inconclusive it is, how much it hurts those who are benefiting from a gluten-free diet that don’t have a conclusive medical diagnosis. But I’m done ranting for now.  For those who want to argue about Celiac, NCGS, or simply choosing to eat a gluten-free diet, I just want to know why do you have a problem with how I eat? I’m not asking you to change how you eat, I’m not forcing grocery stores or restaurant chains to eliminate gluten.  Nothing in your life has to change because of how I choose to eat.  So why do you care?

I spent perhaps too much time this week trying to figure out why people so strongly want proof that NCGS doesn’t exist, that there’s truly no need to eat gluten-free.  I really can’t wrap my head around it.  Perhaps people are afraid they will somehow be required to change how they eat, perhaps they are fearful that we have found a path to health and are judging them for not getting on the same path, perhaps they are just mean-spirited.  I don’t know.  Mostly I found myself yelling at the TV and computer screen, “What’s it to you?  These are my food choices not yours!  Why do you have a problem with how I eat?”

Most of my life I have been vegetarian.  I’ve heard thousands of dull and boring vegetarian jokes, I’ve been told how unhealthy my choice to not eat meat is.  I recently dined with someone who told me a meal without meat isn’t a possibility for them, refusing to try a veg restaurant.  I try to smile every.damn.time someone makes some bacon joke in an attempt to get a rise out of me.  But vegetarianism is a choice for me, I get that.  Eating gluten-free isn’t a choice for many people.  I just can’t wrap my head around questioning anyone’s food choices if those choices make them feel better.  As my favorite fella says, “You don’t have a dog in the fight.”  If gluten doesn’t make you sick and you want to eat a loaf of triple gluten-y bread a day, I’m not going to criticize it.  I’d appreciate the same from you in return.  Why do you have a problem with how I eat?

Instead of spending any additional time worrying about the naysayers and Negative Nancys, I sat down to write five Softer responses to use the next time someone questions why I am eating a gluten-free diet.* It’s my belief we will go a whole lot further in educating folks with a Soft approach than by becoming defensive or inflammatory (things I *may* have done earlier this week).  This is challenging and I found myself in a less-than-soft spot this week.  I’m printing out this list and pinning it to my bulletin board for reference…just in case I get caught up in the media whirl again.

Five Softer Tips for Dealing with “Why are you eating a gluten-free diet?”

A.  I appreciate your concern.  I just feel better when I don’t eat gluten.  It’s okay with me if you eat in a way that works best for you.

A.  Just like any diet, there are healthy and unhealthy versions.  A Vegan diet can be unhealthy if you just eat Oreos and French fries all day.  Likewise, there is gluten-free junk food.  I’m eating a healthy gluten-free diet because I feel better.  I think it’s cool you’re concerned.

A.  I don’t feel good when I eat gluten.  I’m making decisions that work best for me.  It’s okay with me if we don’t eat the same way. I just want to feel amazing and be healthy.  Thanks for understanding.

A.  How about we talk about sex instead?  No?  Well then, what about religion?  Oh, that’s a no-go, too?  Politics perhaps?  Well, okay…if you really want to talk about something as boring as what I had for lunch, let’s have at it but I’m sure there’s something much more entertaining and controversial to discuss than my salad.  (This one is best used with a BIG smile and a hearty laugh.)

Have a wonderful Saturday!

*I definitely believe in educating folks who are truly interested in knowing why I eat gluten-free, those who want to know more about Celiac disease and NCGS.  I’m quick to discern if they are being rude, a jokester or big ol’ meanie.  For those folks, the time isn’t yet right for me to share with them why I eat gluten-free food.  It may never be right.  I geared my list toward that person, not the person who has a sincere interest in how I eat and why.