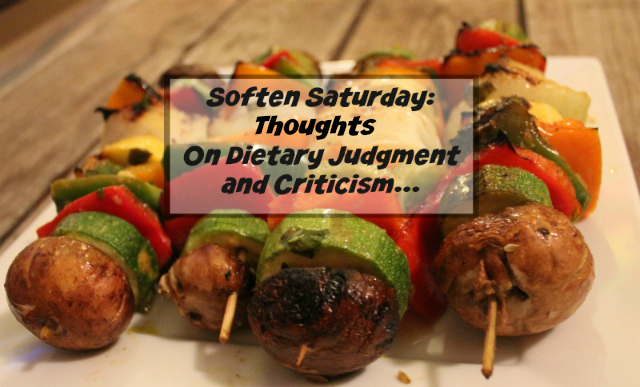 A Note of Disclosure: I don’t feel very soft writing this, because the subject isn’t soft; it’s one of ugly judgment and snide comments. Please stick with me. This is really about asking others to be softer in how they view dietary choices. If I’m preaching to the choir, feel free to forward this to those not singing with us…

Happy Saturday, sweet friends!  And when I say “sweet friends,” I mean both guys and gals.  Even though I write from a female perspective and the majority of my audience is female, I’ve had some thoughts this week about how hard it is for the guys when they make dietary changes, whether by choice or by medical necessity. And I feel like I need to apologize to you gentlemen, I hadn’t realized until recently how hard it is when a guy eats differently than his peers.

In the last couple of months, I’ve seen a couple situations that involved guys. I’m talking about the kind of guys that don’t need me speaking up on their behalf: strong, confident, capable, successful men who were the recipient of the judgment of others and left puzzled by anyone interjecting their opinion toward food choices that had absolutely zero impact on the food on anyone else’s plate.

Both of these men expressed frustration with the situations.  One involved gluten, one involved vegetarianism.  Both situations strained relationships. Is it worth that? Is it worth making someone at a minimum uncomfortable, perhaps even ending a friendship so you can make a snarky comment about what someone is eating?

In my strong moments, when I see someone questioning the dietary choice of anyone (it happens with friends, family, absolutely strangers…), I want to shout, “Hey, It’s NoneYaBizness what they are eating!”  And it’s NOT.  It is none of your business what someone chooses to eat or to not eat. You want to advocate for food labeling standards? You have my full support.  You want to grow a garden and teach others about the benefits of healthy, homegrown produce? I will champion your cause.  But when you decide to criticize the food on someone else’s plate, I’m gonna have a problem with you.

Not that women have it any easier (I could write a book on instances when my food choices have been questioned), but I think we sometimes are granted a little more leeway. Folks might just think we are eating the latest crazy diet, since, after all, women are perpetually dieting.  Men, on the other hand, are less likely to be on a diet and there are set standards for how they are supposed to eat.  Apparently it should include a lot of gluten, a lot of meat and be devoid of anything green.

Here’s the deal: the food on your friend’s plate isn’t hurting you. If they choose or need to not eat gluten, that’s their choice.  If a guy chooses not to eat meat, it is his choice and is no reflection on his manliness…but it might be a reflection on your insecurity. If a guy wants to only eat sprouted food or low carb or Paleo or dairy-free or only food he hunts or only food he grows or only what he can buy from the ice cream truck, NoneYaBizness! If it is your business, there’s a much softer way, a more effective way, to go about it rather than than making rude comments or attempting to humiliate them for their choices.

Here’s really what I’m trying to say: If you know a man who is vegetarian, please don’t tell him “real men eat bacon.”  He’s just as real a man as any other.  He might be vegetarian because he had a cholesterol scare and figured out a vegetarian diet helped. Or he might just like eating a plant-based diet because it’s what makes him feel best. When you bump into a guy who isn’t eating gluten and explains he has Celiac disease, please don’t say truly rude things like, “Ah, swimming in the shallow end of the gene pool, huh?  Bummer that you have such weak genes.” And about the word REAL:  get over it.  In both of the situations I witnessed, the word REAL was used to criticize how these guys were eating.  They weren’t eating REAL meat, they were missing out on REAL bread and pasta. Could be the only thing they were missing out on was a REAL conversation around the dinner table, one that didn’t include harsh judgments about something that is no one else’s business.

So here’s my soften request for the week: before you make a negative comment about the food on someone else’s plate, take a step back. Count to ten, take 3 deep breaths, ponder whether it will make your friend, family member or complete stranger feel good or if you are commenting in an attempt to make yourself feel better by belittling them. If how someone eats makes you so insecure that you need to make negative comments about their food, the work to be done is with you, not with your friend who eats differently than you. There is room at the table for all of us, no need to all be the same.

Climbing off my Soften Saturday Soapbox now. Thanks for listening to my preachy rant. Be kind to the fellas trying to eat their own way, okay? Thanks, sweet friends.