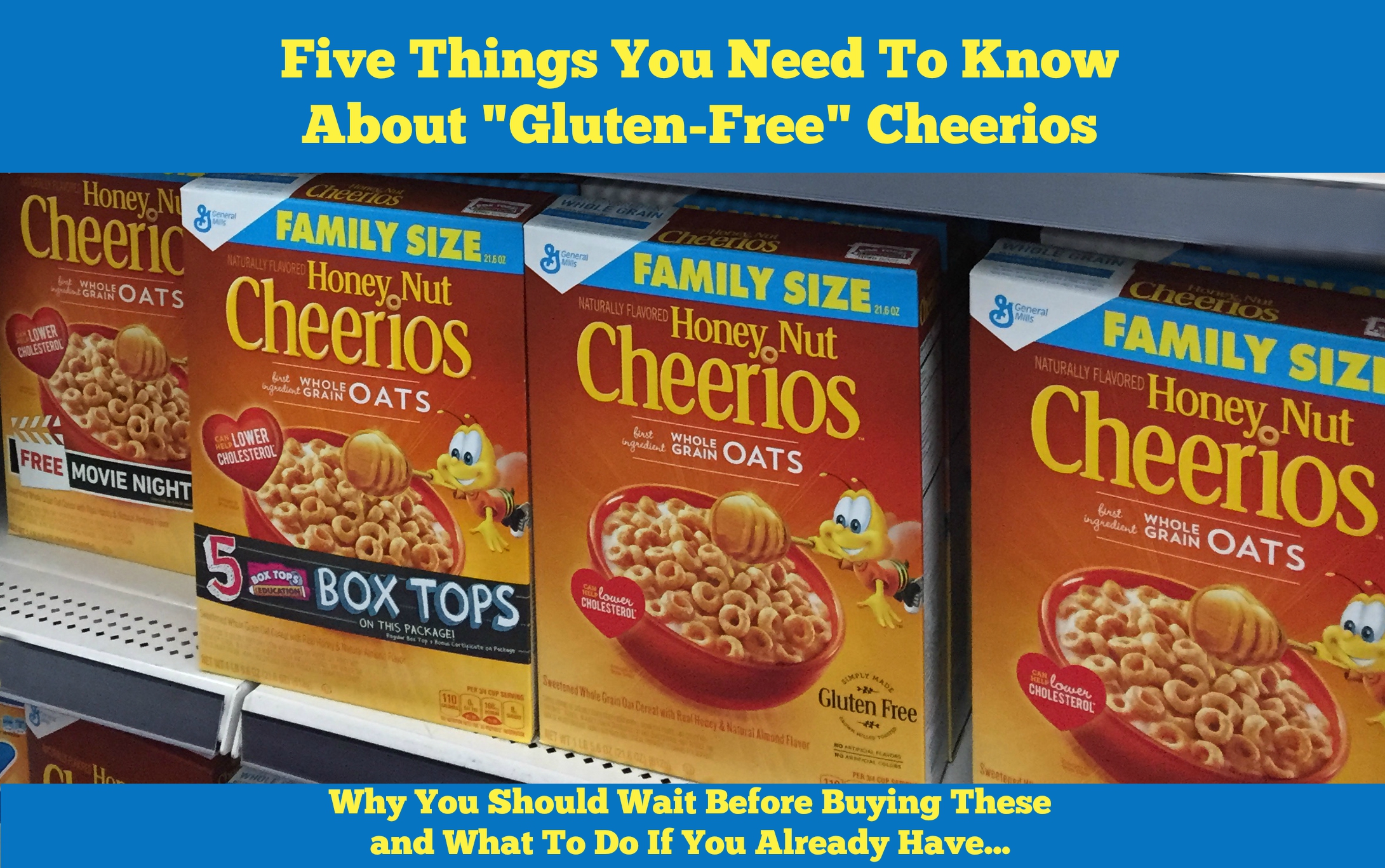 1. The oats being used to make “gluten-free” Cheerios are not certified gluten-free oats.1  They are NOT grown following a purity protocol. They are regular oats, cross-contaminated during growth, harvest and transport. General Mills believes they have developed a system that mechanically separates all wheat, rye and barley from the oats. Again, these are NOT certified gluten-free oats.

2. The testing being used by General Mills/Cheerios is questionable.2  The testing method they are using to assure the final product is less than 20 parts per million (ppm) is “mean” testing of a “lot.”  An explanation: the testing is an average (mean) of one day’s production (lot). 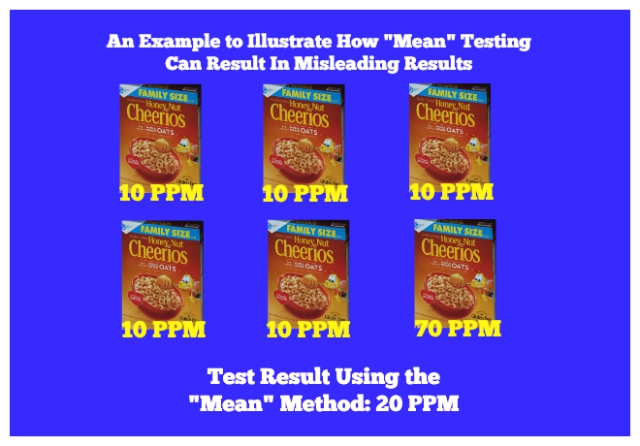 To give you an example: If samples were pulled from six boxes of Cheerios, five of the boxes could be 10ppm and the sixth box could be 70ppm. Then the cereal is blended together and tested. The average, or “mean” as General Mills prefers, would be 20ppm.What does that mean for you, the consumer?  Well, you could eat five boxes and have no gluten reaction.  The sixth box could be filled with a gluten storm.  For me, eating something that high in gluten would result in a trip to the hospital.  This is risky, a gamble on your health, knowing that testing is being done based on averages. You could eat an entire box and feel fine and then get sick on the next box. There are already reports of this exact thing happening, one box causing no issues and the second causing sickness. Or maybe you are someone with Celiac disease or Non-Celiac Gluten Sensitivity who is asymptomatic and you aren’t immediately aware when a product contains gluten, but it catches up with you down the road.

3. There are numerous reports of sickness related to “gluten-free” Cheerios.3  If you have become sick eating these, please read this post from Gluten Free Watchdog.  She is collecting reports of illness linked to this product and submitting them to the FDA. The FDA is aware and is listening. There is also a petition. Please sign it. Your voice matters.I’ve seen it alleged a few times when folks have reported getting sick from Cheerios that it could just be they are oat-intolerant. Or maybe it’s more fiber than they usually consume. I’ve started asking when I see someone report getting ill from Cheerios if they regularly eat certified gluten-free oats.  I’m yet to hear from someone who says, “Oh, I bet that’s it. I don’t tolerate oats.”  Instead, I’m hearing that they tolerate certified gluten-free oats with no problem. Please, let’s stop questioning the people who have indeed gotten sick eating “gluten-free” Cheerios and instead focus on what we can do to resolve the problem.

4. Be aware of endorsements of “gluten-free” Cheerios. When you see a blog post raving about the new “gluten-free” Cheerios, read the entire post.  Did the writer go on a trip to their factory to see this process? Who paid for their airfare, lodging and meals while on this trip?  Does the recipe featuring gluten-free Cheerios contain a disclaimer that says the post is sponsored by Cheerios?  That means they were paid to write it.  Further, make sure you read the comments on any blog post you see featuring gluten-free Cheerios.  Odds are you will see comments from readers who have gotten sick when eating these. I take no issue with those who accept sponsored work, I am among them. I simply want you to be aware that accepting payment does make it difficult to be completely objective.

5. You have lived this long without “gluten-free” Cheerios. Please wait a little bit longer… I know many of you are super excited to have a heaping bowl of cereal that reminds you of your gluten-full days or is associated with childhood memories.  You’ve not been eating Cheerios since your diagnosis.  You can wait a little bit longer.  I’m not suggesting you never eat them again, I am suggesting we all wait until whatever is causing the illnesses related to eating “gluten-free” Cheerios can be addressed. I am suggesting we all wait until better testing methodology is used. I am suggesting your health matters more than a bowl of cereal.

References/Citation of Sources
1.  How “Gluten-Free” Cheerios are grown and processed: Video from General Mills/Cheerios, Cheerios website, Detailed Information from Gluten-Free Watchdog, including information collected while touring the Cheerios facility.

2.  Why the testing methodology is questionable: Thorough explanation from Gluten-Free Watchdog.

3. Reports of Illness: Many reports of illness after consuming “gluten-free” Cheerios are posted as comments on posts related to the release of the product. The largest collection of reports viewable by the public is collected in the comments of the Change.org petition created by Debi Smith. More reports of illness have been collected by Gluten-Free Watchdog and submitted to the FDA.

Change.org
Change testing and production of gluten-free Cheerios to be safe for all. 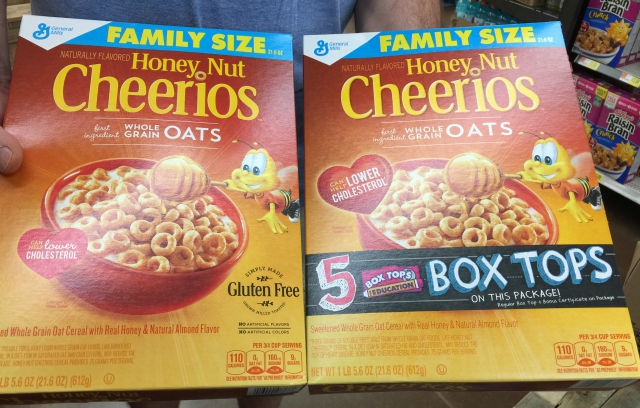 One last note: If you have read all of this and still think you need to buy “gluten-free” Cheerios at the store, please be aware that the old Cheerios and new “gluten-free” Cheerios are on the same shelf.  The box design is identical, save for a small “gluten-free” seal on the box. It would be easy to pick up the wrong box. And even if you did pick up the “right” box, well… it’s a gamble. Be safe, friends. Take good care of your health.  Wait this one out until we have better information and know what is making folks sick. 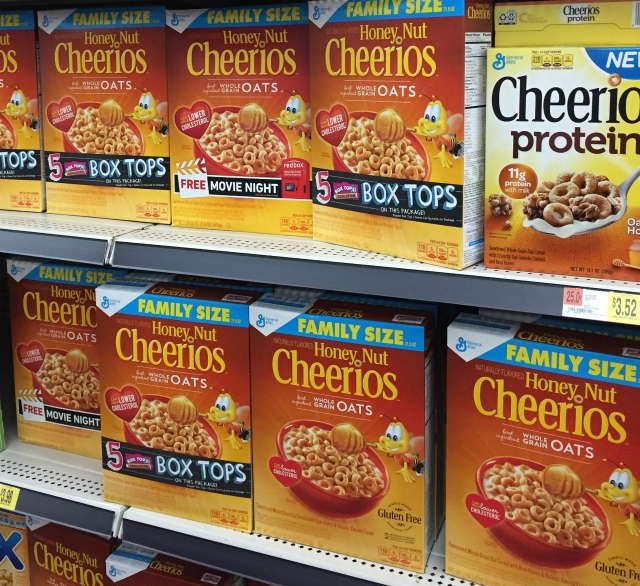