If you want to read more about the “gluten-free” Cheerios debacle, please start here. 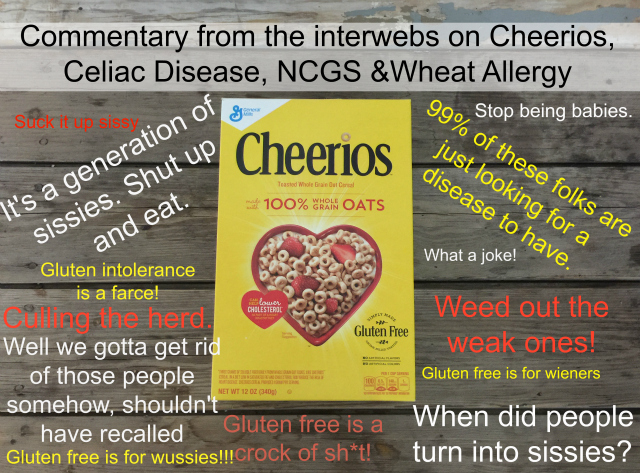 Every day for the rest of my life I will have to diligently choose the food I eat.  I cannot eat anything with gluten, not just a bite, not a crumb.  I get very ill from gluten because I have a medically diagnosed condition, Celiac disease. Others who have similar medical challenges are diagnosed with Non-Celiac Gluten Sensitivity (NCGS), which is just as serious. There is nothing we can do to treat our disease other than eat a strict diet free of gluten. If we choose to not treat our disease now, we will deal with cancer, additional concurrent autoimmune diseases, death.

Yesterday, when 1.8 million boxes of Cheerios were recalled for undeclared wheat (and therefore gluten) in the cereal, the internet exploded with people making fun of those who eat gluten-free.  They didn’t single out those who are gluten free by choice, they also made fun of those with Celiac disease, NCGS, wheat allergy.

Want to get a look at the things that are said to those of us living with a disease there is no cure for, no treatment for other than eating gluten-free? I encourage you to read these comments. Not a day goes by that someone doesn’t make some snarky comment to me about how I eat. And now, thanks to a Fox News post on Facebook, we can get a broad overview of how some members of the public feel about those of us who eat gluten-free.

To sum this up, thanks to the “gluten-free” Cheerios debacle, I have learned that many people think the disease I have is a choice, that I am eating a fad diet, that I am weak and should be culled from the flock. I can only imagine the outrage if people said the same thing about those living with cancer or any other chronic illness.  Today I’m sad at the lack of empathy so many have. Not only is the gluten-free community in an all-out struggle to make sure food labeled gluten-free is safe to eat, but also to convince those around them and even on the internet their disease is legitimate.  It’s sad.

Comments below were collected from a post on the Fox News Facebook page. Fox News shared the General Mills recall and isn’t responsible for these comments.

It’s a generation of sissies. Shut up and eat.

Yet nobody noticed. Only after are people like, yeah, I don’t feel so good… hahaha, wusses.

Send me the cereal. I’ll eat it! Time to stop making a case for the minority of people. When I was a kid and growing up, there was NO such thing of this crap!

I’ll eat it, no problem for me! I never saw a real live gluten, anyway!

What a rediculous scam….what can we make up next?

We should be more tolerant of gluttons!!!

Wonder how they figured it out, did someones dick fly off?

The newest band wagon to jump on. Have at it ya’ll!

9 out of 10 won’t even notice, it’s kinda like climate change or whatever

Oh no! Cereal that has something edible left in it! Look out!

Ha this is funny.

so aren’t this people smart enough not to buy it. duh, what about the outer 329 million that can,

When did people turn into sissies? Seriously? Ugh

This just in….this could affect up to 1% of the population. (maybe)

This is a modern invention of someones mind.

How did people even survive before the gluten free frenzy??? I’m pretty sure 99% of these folks are just looking for a disease to have.

All the hipsters and fat housewives buy gluten free stuff

For 10000 years we have been eating Gluten now it kills us. Go figure.

So it’s going to actually bother 3 people in the u.s

Gluten and bottled water. The biggest scams ever. Like organic.

Lol weed out the weak ones!

Im allergic to gluten-free products. Send them to my address pre paid, thank you.

How the hell did we all make it this long.

Does anyone not cheat anymore?

And no one died.

Join the world. Leave your bubble behind

Well we gotta get rid of those people somehow, shouldn’t have recalled

Funny thing is no one noticed……as long as the box said it everyone was fine.

Pass it my way. ….I don’t believe in the glue crap

Mercy mercy. Never heard of gluton in the 50’s.

So it may affect a few dozen people.

About 1% of the worlds population has celiac but it seems like 90% of Facebook users has it. Kinda funny!

Gluten free is a crock of sh*t!

So what. Don’t have allergies.

Allergic to gluten! What a crock of s**t! It’s bulls**t. A made up ailment.
If they are really allergic let them eat corn flakes. Or f**king die.

“I can’t eat that; it’s not gluten-free,” said no one in the Third World ever

I hope they recalled them to put some gluten in them.

Most doctors even say this is just a stupid fad, and that most people who claim gluten allergies are making it up.

Very, very, very few people have a gluten intolerance, although many, many think they have one. People have been eating gluten since the beginning of time. Welcome to the 2000’s where poor health habit symptoms has to be blamed on something.

Gluten allergies are pretty much a myth.

Omfg…. gluten free is a scam..

What the heck is this gluten allergy. I never heard of gluten until a couple of years ago.

People have been eating gluten for a thousand years or more. All the gluten allergic people should all be dead by now.

What kind of loser is allergic to gluten?

Gluten free is for wussies!!!

Man….I long for the days when “gluten free” sounded like you were getting gluten without paying….

God are u serious its from people not eating real food . that’s where the allergies come from picky eaters . . doctor said I was going to be a allergy baby . I can eat anything . roll in poison ivy . people cry because cucumbers make them burp. If a real plague comes around the weak will go first.

And what percent of the population requires gluten–free foods? Next, they’ll sue the chicken because they’re allergic to eggs….

Gluten allergies were proven fake years ago. Most aren’t rich enough to have this supposed allergy.

Ha! Ha! Be careful you .05% of the general population that actually has gluten allergies.

Ha! No one said anything, which means gluten intolerance is a farce!

What B.S. !! Gluten free ? Gluten intolerant ? It’s a politically correct fad these days to be allergic to something that has existed in our diets for century’s !

Meanwhile, no one noticed. Except the 3 people who have Celiac disease who really can’t eat gluten.

Gluten free. Just another way to jack up prices on food. Give me a break. Has anyone died from gluten yet?

Until I was 60 I never heard of allergies to peanuts, milk, now gluten and believe this is a group of fake allergies to promote medical care and drugs ! I am only allergic to the 9 th. beer !

People aid wheat as a staple for thousands of years and all of a sudden all these people are gluten intolerant?

How many people are actually ALLERGIC to gluten? I thought it was some extremely rare disease where people can’t eat it. Otherwise, the gluten-free thing is a silly fad.

Stop being babies. It’s been proven that people are not gluten free.

What did people do when there wasn’t gluten free foods?????

They either avoided certain foods or put on their big people panties and ate like normal people. We have a generation of sissies.

This is what happens when you start down this path of trying to please everyone. Gluten has been around since people started using wheat and suddenly everyone has an allergy to it. If you want to make one special Cheerios for gluten free have at it, but it isn’t necessary to take the gluten out of all of General Mills products. This is insane! This message brought to you by the I Love Gluten Foundation! LOL Me!

These so called “gluten free” people will get over it

The gluten scare like most food scares has been debunked.

Gluten allergy? Is this like the peanut allergy? What a joke!

Gluten allergies started about 8 years ago…90% of people asked have no idea why they are gluten free…”It’s just cool to be that”. Get over it and eat food.

lol sux to be them I love Gluten! Gluten free is for wieners

No such thing as a “gluten allergy”. Same as latex. You may be sensitive to it, but there is no allergy. No one has died from gluten, it’s a scam. Just something else for the whiny masses to pounce on.

Did gluten allergies exist 15 years ago, I never saw gluten free products back then. Must be mostly a hypochondriac thing

Gluten allergies are a fad diet.

Most people who think they are allergic to gluten don’t even know what it is!!! Lol

Gluten allergies never existed a few years ago. Suck it up sissy

Breaking News: 1.7 million people had no reaction cause they don’t have celiacs disease, but easy gluten free cause it’s the in thing

The 3 people with gluten allergies

The only reaction to gluten is you get fat. That’s not allergy.

People are morons. Not this many people have gluten allergies.

Most people need gluten in their diet! Gluten allergy is very rare! Just another advertisement ploy!

Yes, all 4 people in the world that really have gluten allergies..

I remember a time before it was “cool” to have a gluten allergy.

Rofl. oMG. The whole gluten thing is a scam. Only one percent of the population of the US has the disease call celiac which is an intolerance to gluten. All you idiots that go on gluten free diets are simply idiots. Trust me the people that have a problem with gluten, all 1% of the population of the US will be fine. This is all a marketing scam. Eat products with gluten. It’s good for you and you need some gluten. Lol. Do any of you even know what it is and cause if your sensitive to gluten? Doubt it. Scam scam scam. Educate yourselves about it.

I’m not rich enough to have a gluten allergy