We have a tiny flock of backyard chickens, pets with benefits I like to say.  Our ladies keep us laughing with their antics and keep us stocked with fresh eggs, usually enough to share with friends and neighbors.

I say usually because our black cochin Geni often gets broody.  She likes to collect all of the hens eggs and sit atop them, hoping to hatch babies.  We were cautioned that we should break her of this behavior, quickly collect eggs and lock her out of the coop.  We tried, but it made her nearly crazy.  For two years, she kept trying off and on to tell us she wanted nothing more than to be a mama. 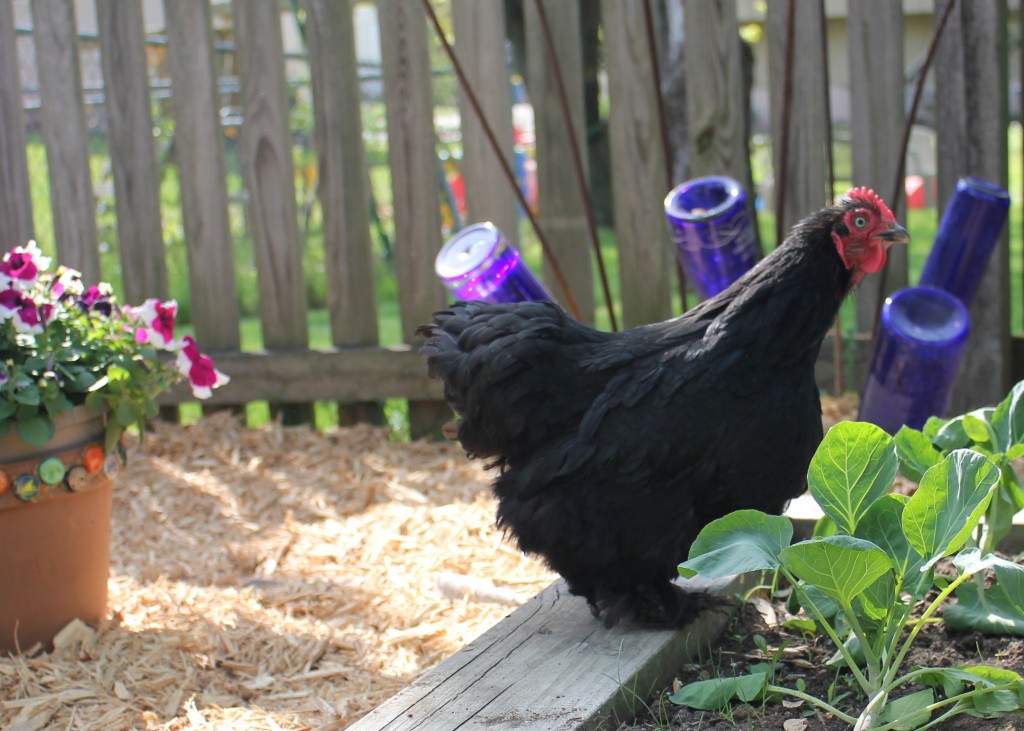 So we relented.  We managed to get six fertilized eggs from a friend who keeps a rooster along with his hens.  One warm evening we put them in the nesting box and sat Geni atop them. 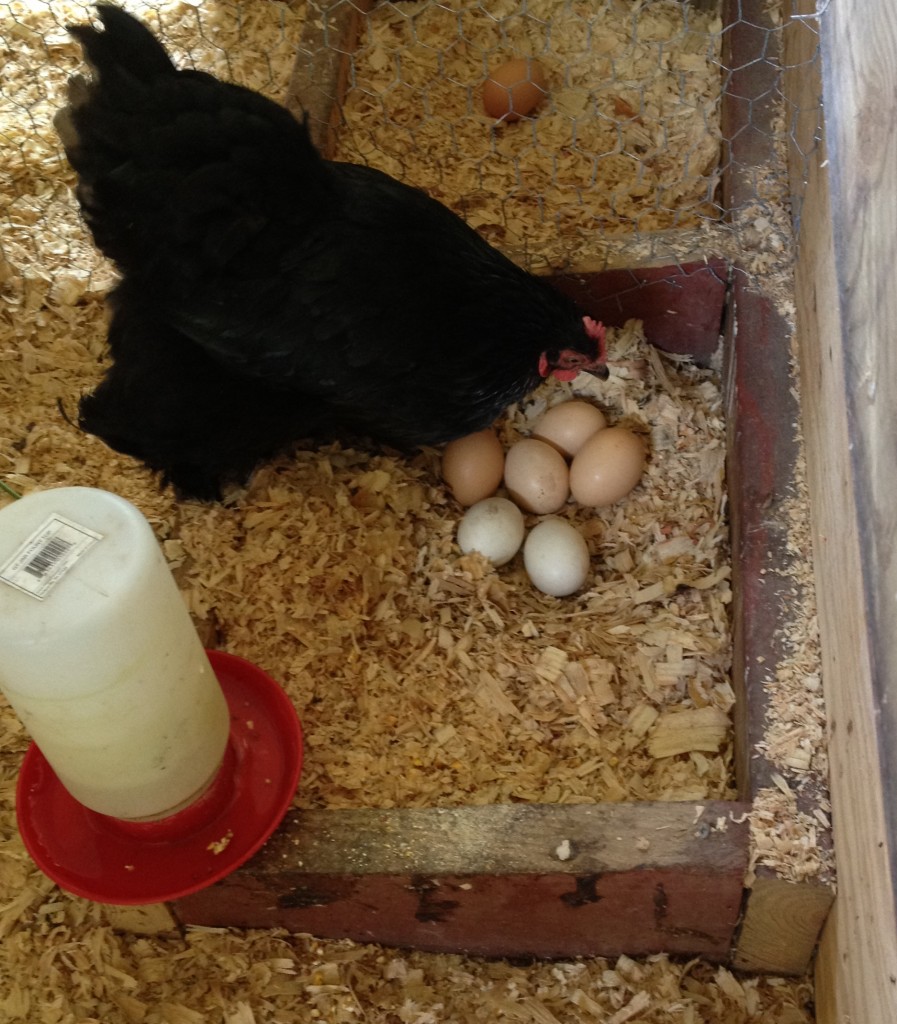 For twenty-one days Geni sat on those eggs.  We took food and water to her, as she was insistent on not leaving the eggs even for a moment.  Our formerly-sweet and cuddly hen had become ferocious to anyone who dared get within a foot of her.  We read somewhere that we should encourage her at least once a day to get up and walk around so we did.  She would pace frantically for five minutes or so before running back to the eggs. 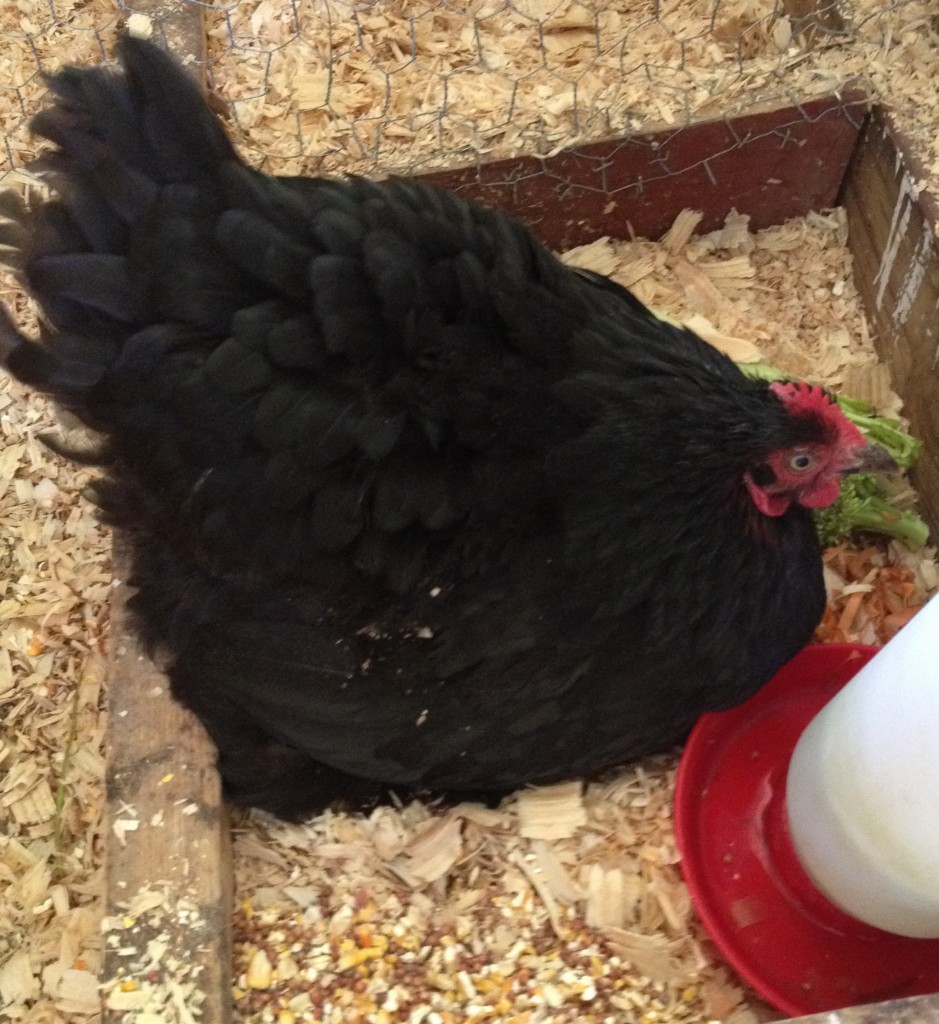 During those brief moments away from her eggs, we would sneak the eggs inside the house and candle them, using a flashlight to see if chicks were actually growing.  Early on, we could see movement in all six eggs but after 17 days, we couldn’t see anything.  We worried our attempt at helping Geni be a mama had somehow failed. We continued caring for Geni, who had taken on a very zen-like demeanor.  Even her breathing would slow when we returned her to her eggs.  She would gently use her beak to roll each egg into just the right spot beneath her, close her eyes and just breathe.  She was intensely focused on hatching chicks. 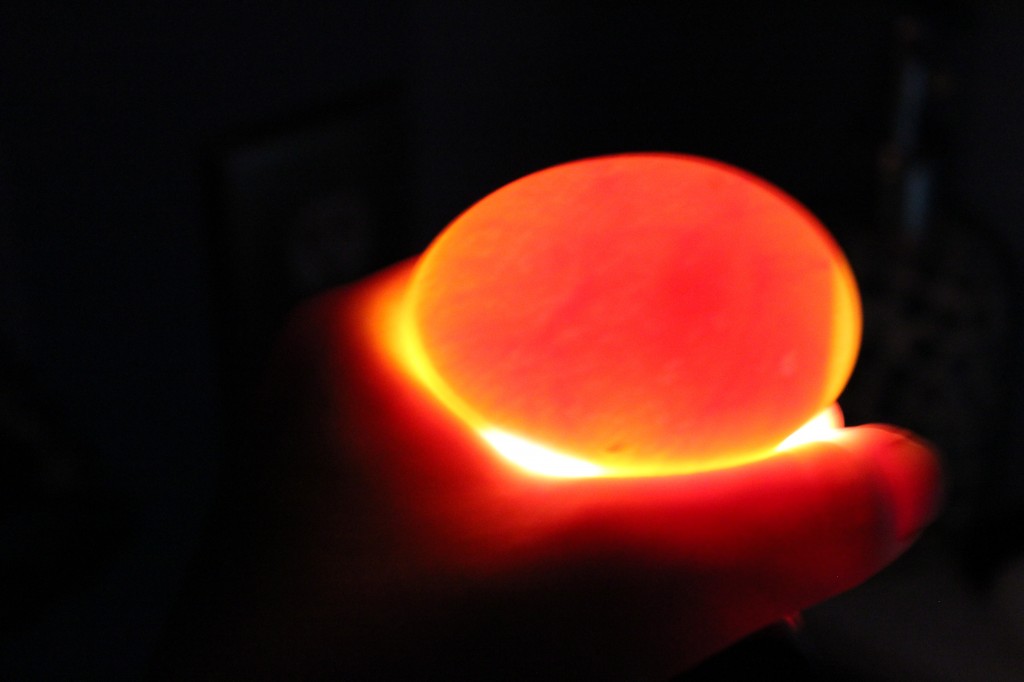 On the evening of day 20, I lifted one very cranky Geni off of her eggs.  I could see pip holes, the tiny little holes made by the chicks beaks as they begin to hatch, in 4 of the eggs.  That seemed like a pretty good outcome, 4 of 6 eggs appeared to be hatching! 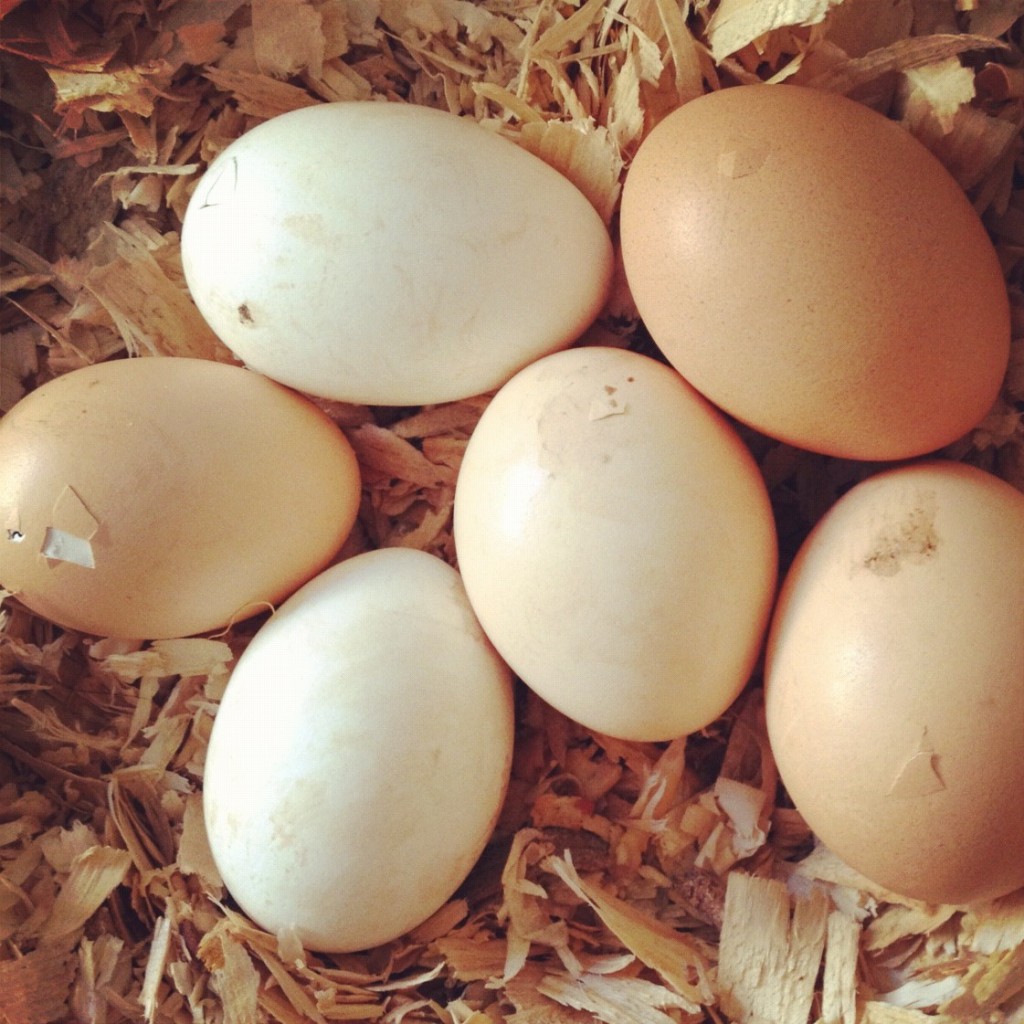 By morning, we could hear chicks chirping away beneath Geni.  We couldn’t see them, as she had them all tucked tightly beneath her.  We knew we needed to remove the egg shells so we attempted to lift her off of the chicks.  She had become ferocious and fought like a rooster, not like a petite hen who likes to sit on your lap.  We finally succeeded in lifting her just slightly off of the chicks and discovered 5 of the 6 eggs had hatched!  Tiny little chicks, fuzzy little balls of joy, squirmed in the nesting box.  We quickly tidied up the now-empty shell and left the sixth egg just in case, even though it had no pip holes, no sign of hatching. 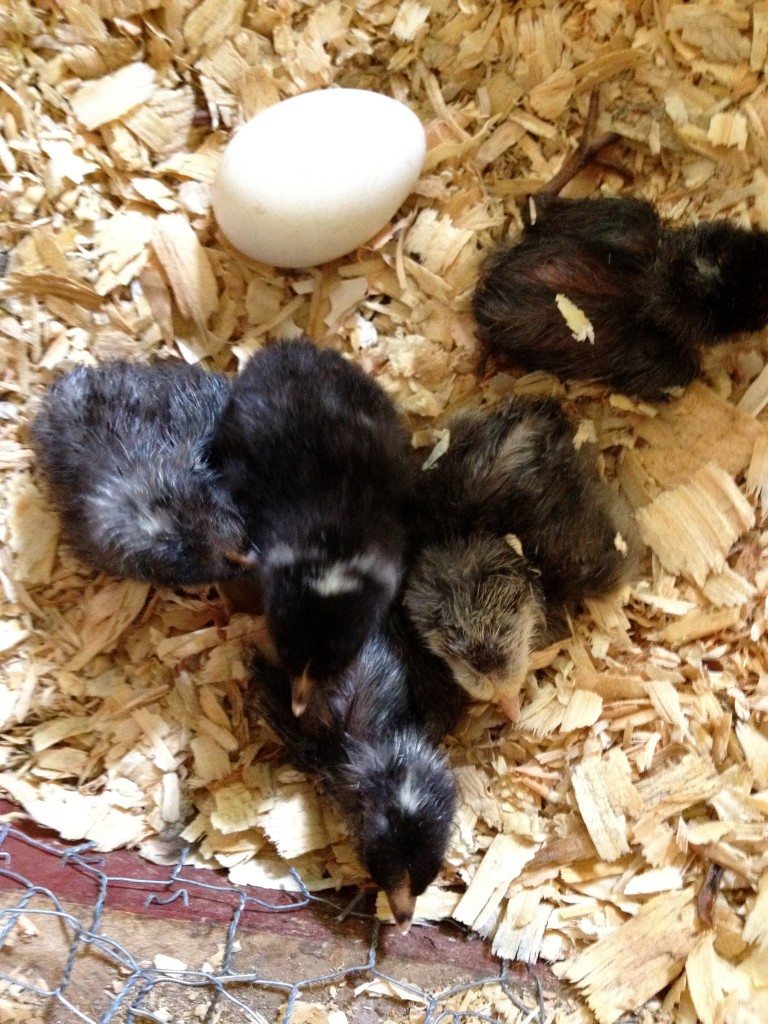 A couple hours later, fellow chicken keeper Renee dropped by to see the new chicks and to our surprise, we found we now had SIX little chicks.  The final egg had hatched! 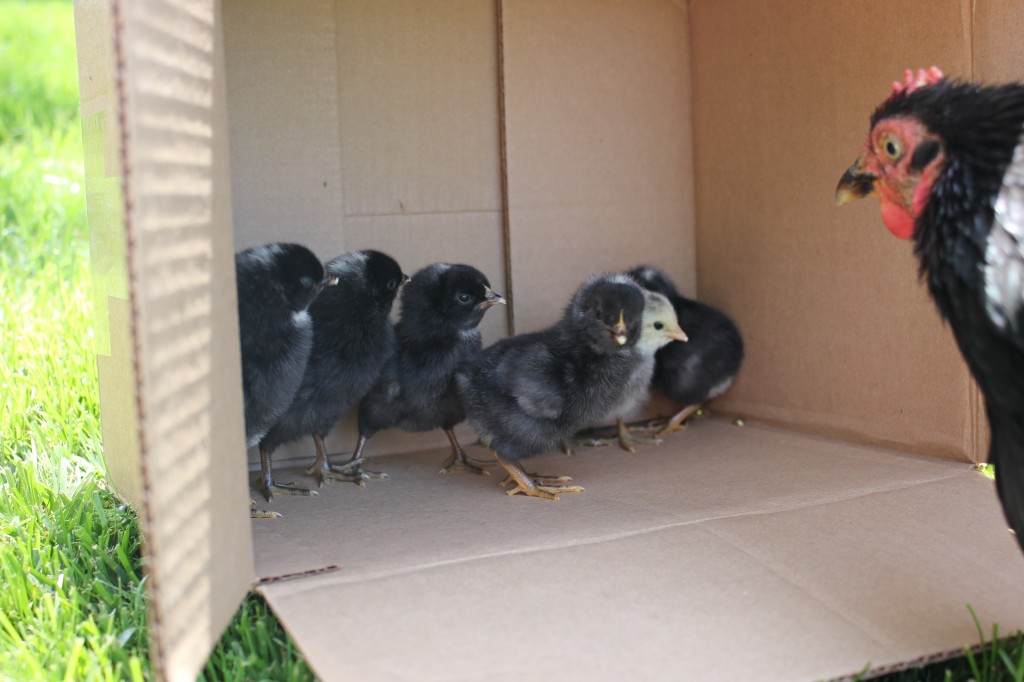 For two months, we watched Geni mother those chicks.  They were nearly an obsession for her, this is what she was meant to do.  She would sit in her nesting box at night with the chicks first tucked beneath her breast, then as they grew she would spread her wings at night, tucking them all beneath her.  It looked so uncomfortable, she would nearly flatten herself to get all of her babies close to her. 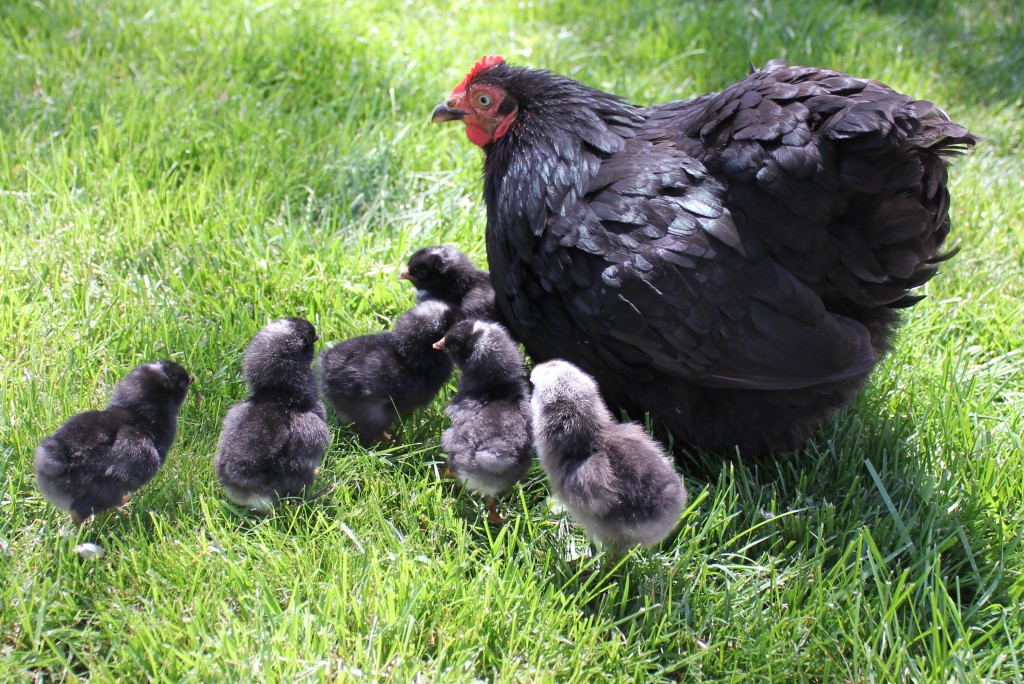 After a few weeks, the baby chicks started climbing on Geni, jumping over her, generally causing a ruckus.  But she remained patient. Her focus was on keeping the chicks safe and teaching them everything they need to know.  We watched as she taught them to scratch for food, chase after bugs, bathe in the dirt of our garden. In the evening, she would round up her chicks and wait on my favorite fella to come push them toward the coop. 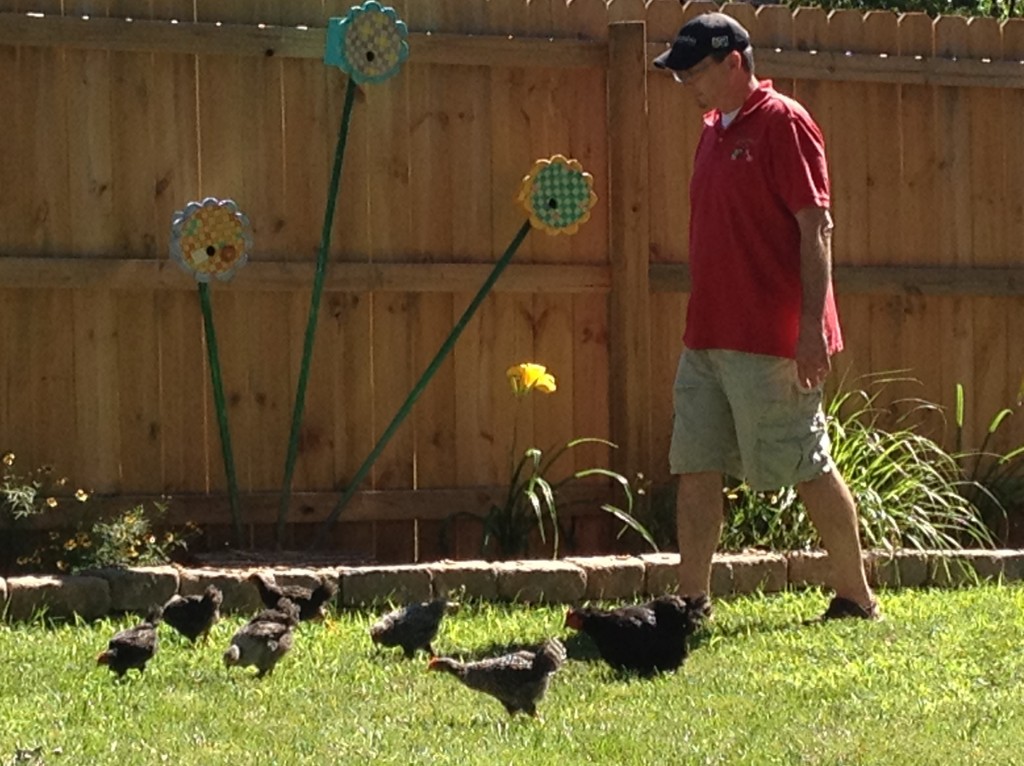 Two months into motherhood, Geni started needing a few  moments to herself, a bit of peace and quiet away from the chicks.  We knew it was time to send four of her chicks to the friend who gave us the eggs.  We worried that Geni would panic but she never let on that she was missing them.  She got up the next morning and got busy, bossing around the two chicks we kept for our flock.  Occasionally, she would snap at them, as does any overwhelmed mom.  Within three months, the chicks we kept in our flock had grown bigger than their mama but to this day, they mind her and she definitely holds a higher spot in the pecking order than they do.

Because not every adventure is perfectly full of unicorns and rainbows, I feel like I should share that the four chicks who went to the egg donor’s farm were snatched by a coyote or fox, along with all but one bird from their flock.  I was very sad at hearing this news, but also know this happens often with those who raise backyard chickens and ducks.  Those folks now have created a chicken fortress and have one of the nicest backyard chicken environments I’ve seen.  While those chicks were lost to nature, their current backyard flock is better because of the unfortunate incident. 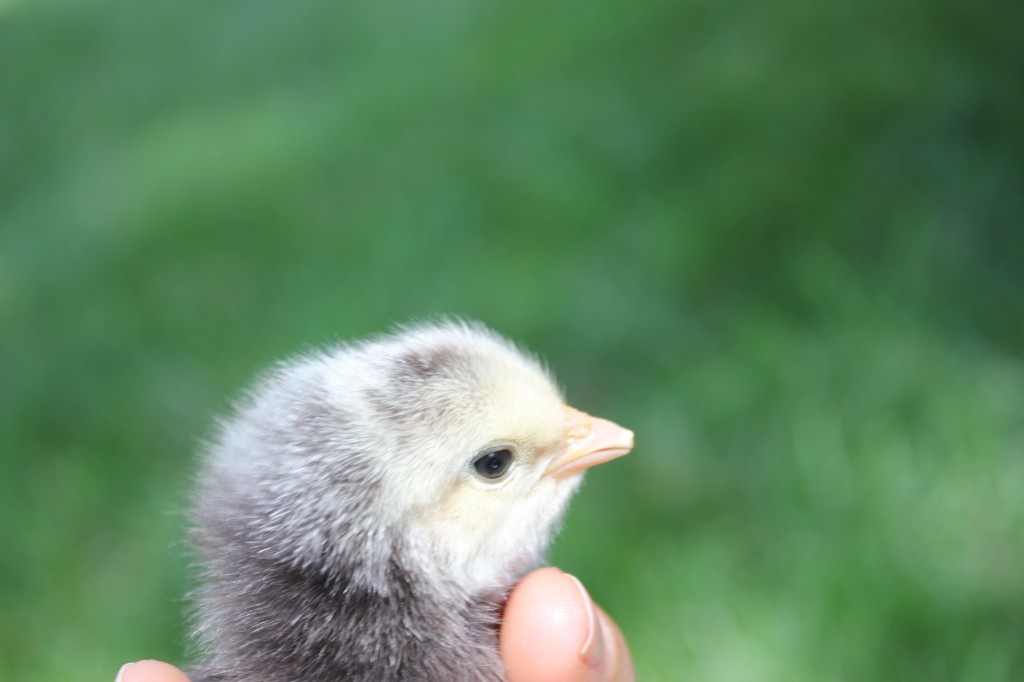 The two chicks who joined our flock are Chia and Lily.  Lily was the fair-headed chick, one of the smallest.  This is ironic because she has grown into the biggest chicken we have ever had.  Her cluck sounds like an old lady who smokes two packs a day, if such a lady were to cluck.  While not as cuddly as Geni, she tolerates being held and lets us know when it is time to collect her daily egg with her gruff clucking. 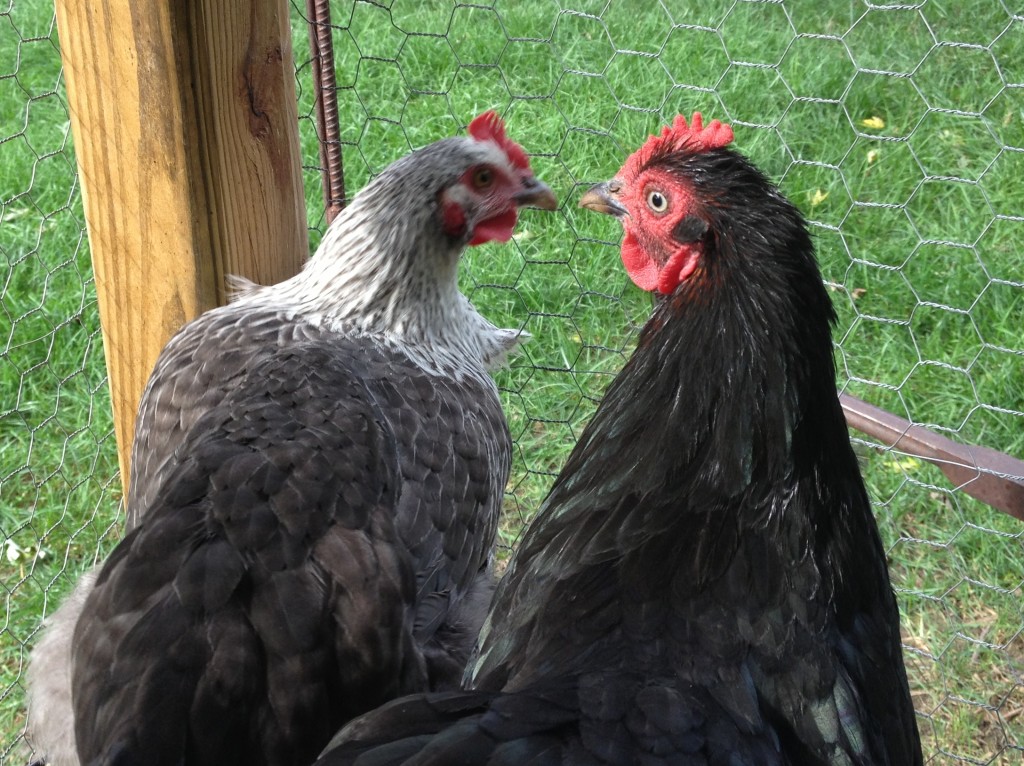 Chia is an odd chicken.  She is very skittish, even though she grew up with plenty of human interaction.  She is often by herself, but within sight of the rest of the flock, doing her own thing.  When she decides to rejoin the flock, she goes this funny run/fly thing that barely has her feet off of the ground.  She is definitely the quickest of our chickens but isn’t quite sure what to do with her speedy ability.  Once in awhile she will eat from my hand, but rarely lets me hold her. 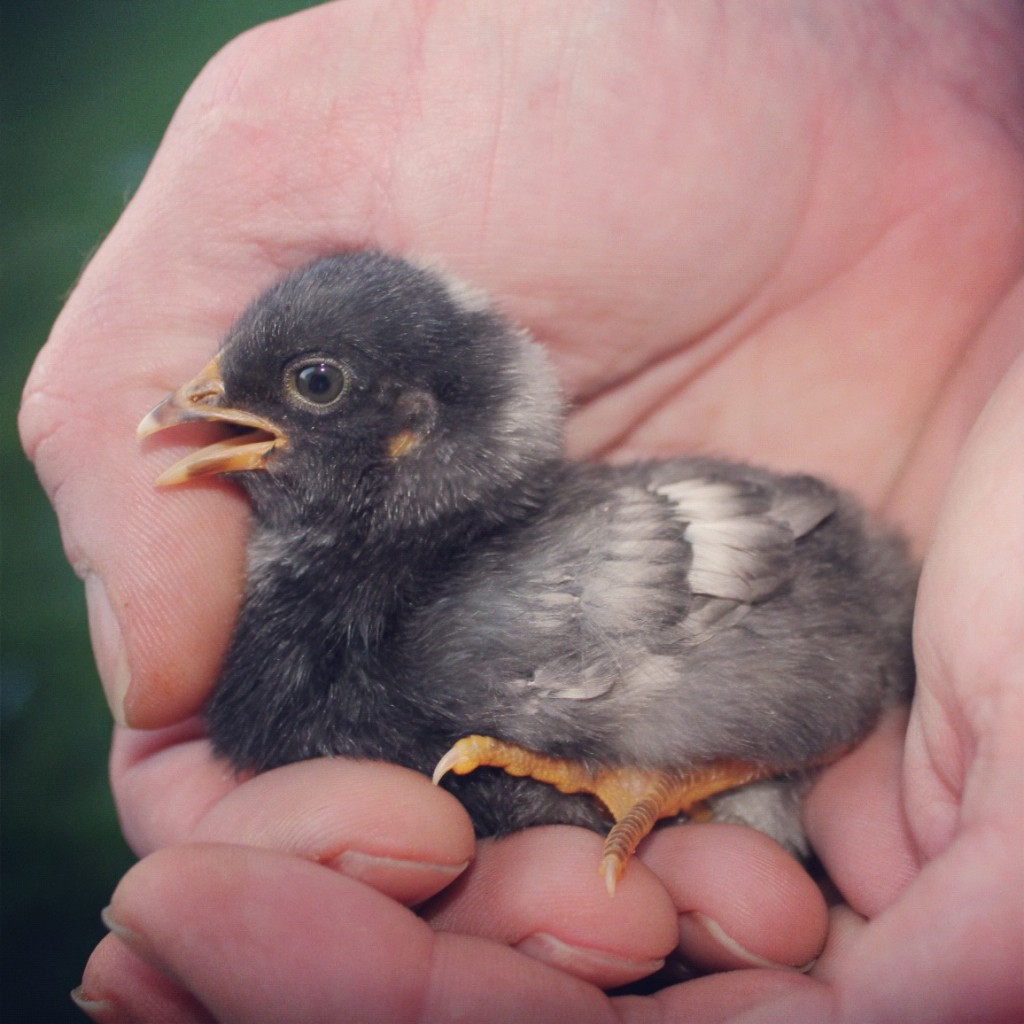 Perhaps the most challenging part of raising chicks was integrating them into our flock, which means we had to get the elder chicken, Ashley, to accept them.  Ashley is an old lady, hasn’t laid eggs for a long time, but retains her position at the top of the pecking order.  Once the chicks got closer in size to her, she softened a bit in her crankiness toward them.  Occasionally she will even share her bench with them. 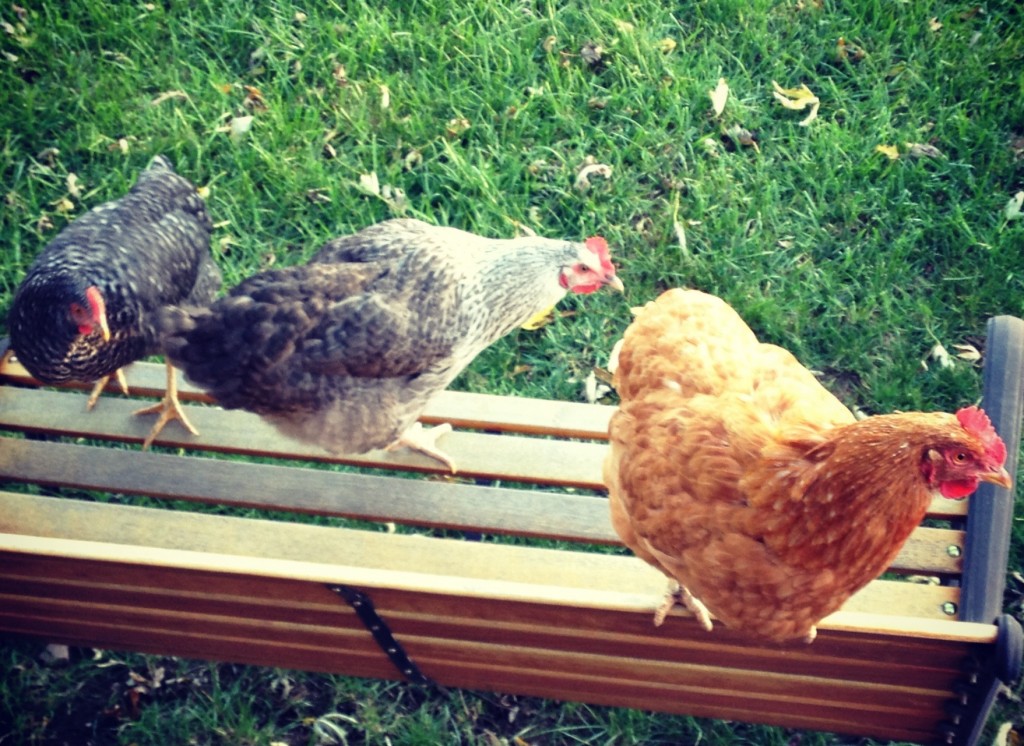 In my mind, once Geni had chicks her broodiness would subside.  But no.  She has already been found hoarding eggs.  We had a firm conversation recently, where I reminded her how much sleep she had lost raising those chicks, how annoying they can be as adolescents.  She quietly relented, let me collect the eggs and sulked off.  I hope she is content for awhile, as I’m not ready for the stress and anxiety of an entire flock of newborns again! For now, there are plenty of eggs thanks to her chick-raising abilities.  Both chicks are reliable egg-layers and seeing Geni hatch and raise them was one of the best adventures of 2012.