Continuing on my journey to prove eating at fairs and festivals isn’t impossible when you have food intolerances, allergies or preferences, I went to the middle of Kansas to the Smoky Hill River Festival. 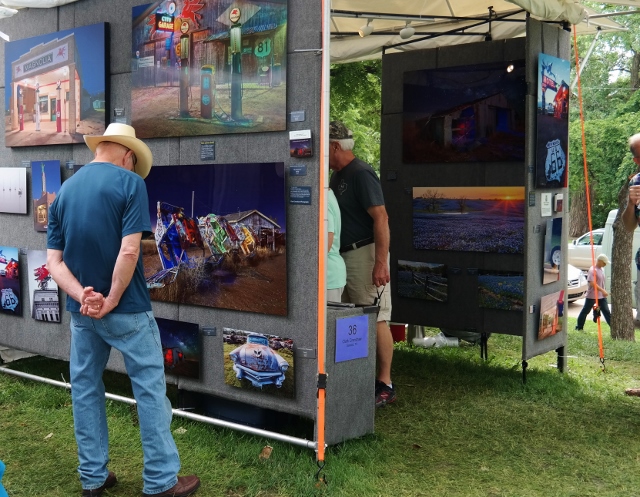 When I tell folks from my own city, which is a mere three hours from the Smoky Hill River Festival, that Salina, Kansas is a groovy town filled with art year round, I am met with a look of puzzlement.  When I ramble on, telling them their annual festival has multiple stages of music, artists from all over the U.S. and good eats, I am met with total bafflement.  So I can imagine when I share with you sweet readers, from all over the world, that a town of less than 50,000 people in the Great Plains of Kansas has a world class music and arts fest with food for everyone, you probably won’t believe me.

Of all of the music and art festivals I will attend this summer, Smoky Hill is likely to be my favorite. In years past, I’ve listened to bands I had never heard of…and then heard then on the radio within a year.  I’ve seen a drag queen beautyshop quartet, a band I had seen one other time opening for Jack Johnson, an acoustic duo I didn’t know anyone else in the Midwest even listened to, it’s where I discovered Ben Folds’ brother has a children’s music band… I’ve added art to our collection year after year in Salina, some of it from Midwestern artists, some from artists far from home.

And then there is the food.

Like most festivals, a listing of food vendors is available on the River Festival website in advance.  I reviewed it this year and didn’t find much that I thought would work for me. (I’ll tell you in a minute why that is ok…) 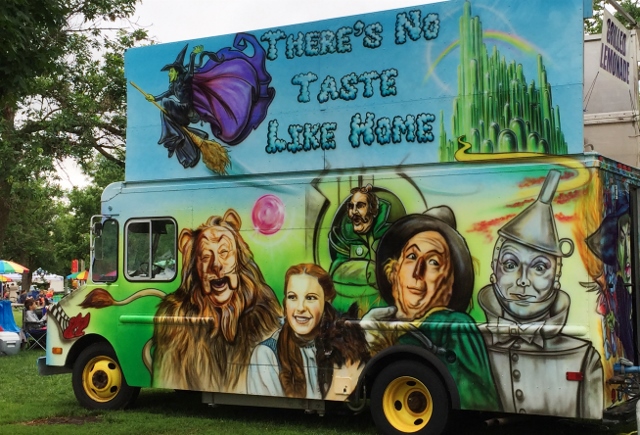 What I did find was this gorgeous food truck with a Wizard of Oz theme, There’s No Taste Like Home.  They were definitely my favorite food find of the year. 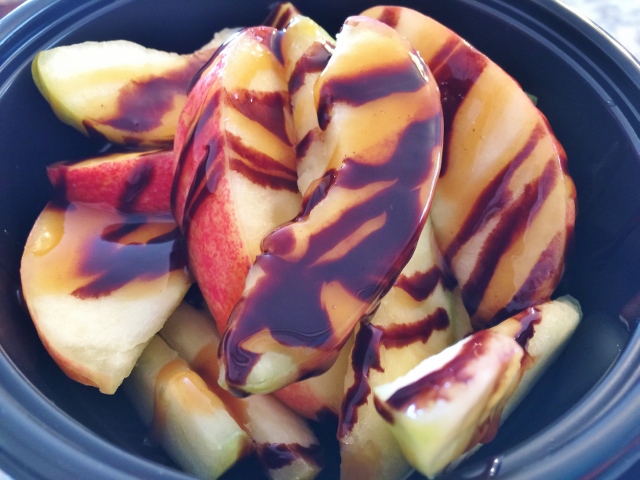 I had their apple nachos: apple slices with my choice of toppings from chocolate, caramal, raspberry, nuts.  I kept it simple with chocolate and caramel.  It was more than enough to share. 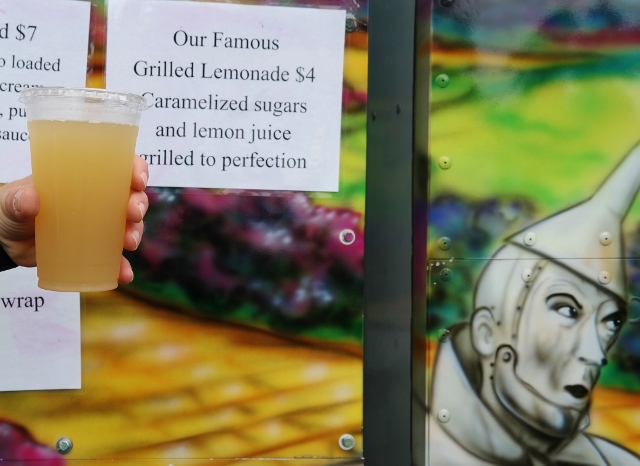 So about me not finding much food that worked for me:  Scout to the rescue! (We are so creative here that we named our trusty cooler Scout, but that’s really just the brand name.) This cooler has traveled to both coasts and many places in between.  I don’t even know if they make it in this print any longer. It’s trusty, keeps food cool and refuses to fall apart.  It truly saves the day at festivals where I can bring my own food. 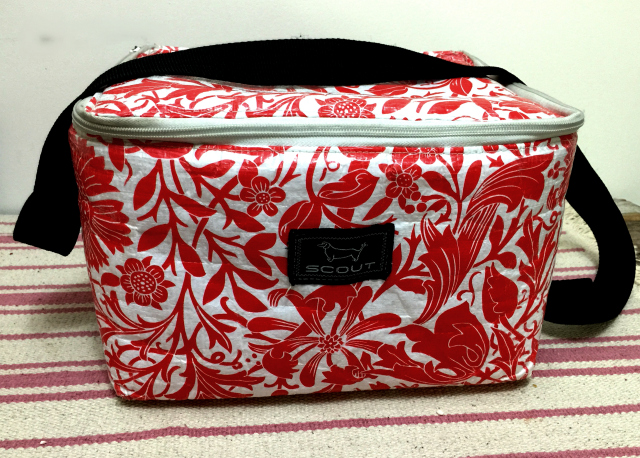 The River Festival, like many other festivals, allows coolers to be brought in.  Their rules prohibit glass containers, but otherwise you can bring in your own eats.  And that is where I stop listening to anyone’s whining about not being able to eat at a festival.  I packed salads, spring rolls, hummus and veggies to dip.  Not a single worry about not eating here.  Had I not planned ahead and brought food from home, again not a single reason to worry.  The Dillons grocery store near the hotel where we stayed had gluten-free food I had not seen even in the big city, vegan goodies galore and a beautiful produce section.  We chose a hotel with a small kitchen plus they had a lending library of small kitchen appliances.  I ate just as well in the middle of Kansas as I do at home.

Wanna see some of my favorite art installations from the River Festival?

This is a mural-in-progress, painted with spray paint by artist GEAR .  Here’s day one: 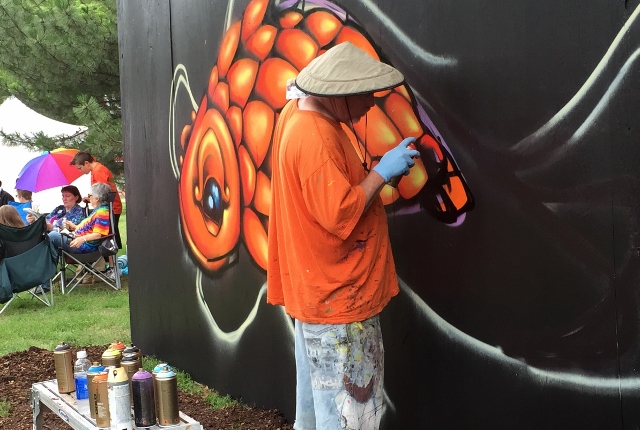 And here it is finished.  These murals are installed around the community when the festival is over. 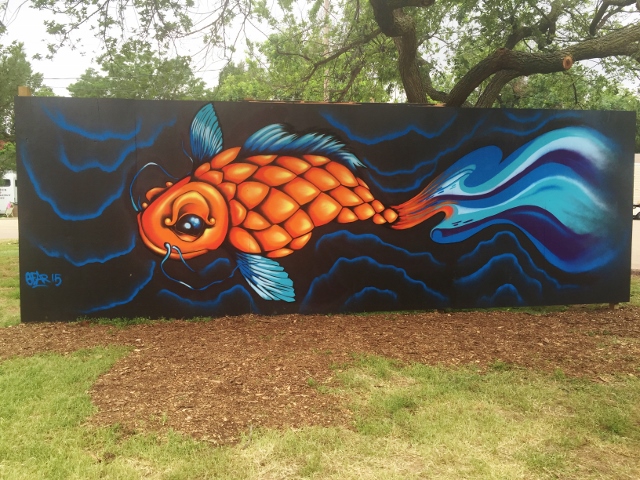 Look at this great artwork by Colin Benson painted directly onto the river bank: 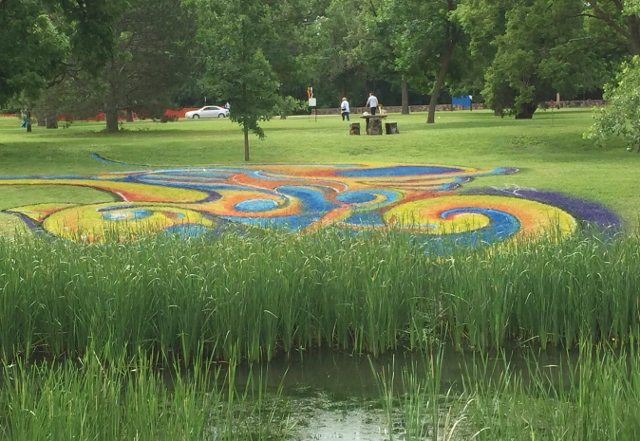 This was my favorite installation piece this year, Bubblegum Bison.  A painting with colored sections designated was hung on a wall with gumball machines nearby.  You could chew gum and then stick it in the corresponding colored area of the artwork.  The guestbook of gum chewers was fascinating. Folks from Canada and Japan, Kansas and Florida.  The artist keeping watch on the piece, Herrick Smith, told me he is a potter in real life.  I told him I am an artist sculpting with balloons in real life. I guess as opposed to being a gum chewer in real life. 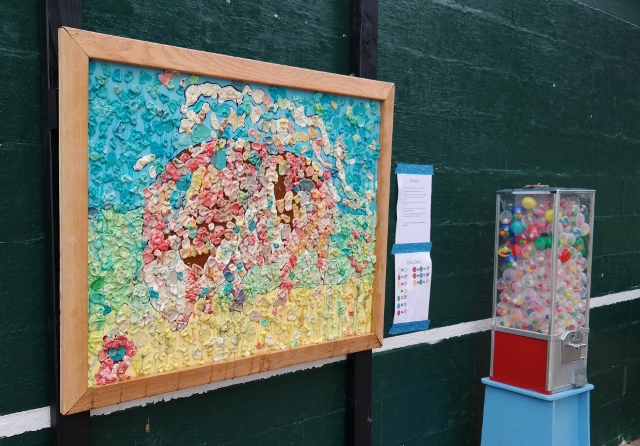 I’m headed to 80/35 Music Festival in Des Moines, Iowa next.  I’ve got one food find on top of my list, plus Weezer will be there. Can’t wait to tell y’all about the fun and food there soon.  In the meantime, regardless of your food stuff, get out there.  Come have some fun with me at a fair or festival.  Your excuses are being debunked at every single festival I attend…

River Festival is held in Salina, Kansas the second full weekend of June each year. 2016 will be their 40th year.  I hope to see you there.

Full Disclosure: I attended the River Festival as a performing artist this year, which means I was paid to be there doing what I do in “real life.” I paid for my own food and beverages featured in this post. I don’t think the festival folks know I write about food and travel, which means they didn’t ask, prod or require me to write anything about their festival. These are my opinions.  There’s an affiliate link for my lunch cooler in this post.  If you buy one, I’ll make something like a buck and 37 cents which I promise to use to pay for this website, not buying more gas or plane tickets to get to another festival.  My privacy and disclosure policies full of legalese are found at the bottom of this page. Thanks for your support.