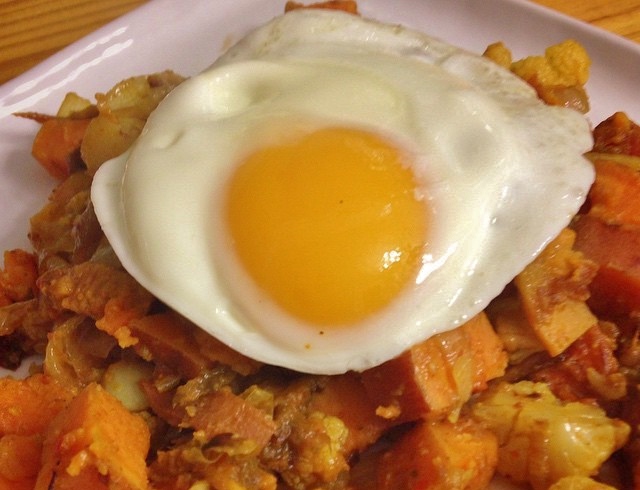 Perfect for breakfast, brunch or brinner, Curried Sweet Potato and Cauliflower Hash.  I want to share with you how this came to be. It has a fun back story!

Baseball always seems to be rooted in many weird superstitions.  One friend wore the same hat to every playoff and World Series game the Royals played in this year. He bought that hat the last time the Royals were in the World Series.  In 1985. It’s never been washed. That’s pretty hardcore.  A local TV station did a story on the superstitions/traditions in our community related to baseball. One woman said she and her husband had invited new friends to a watch party. The Royals lost the game that night. They would not be inviting them again.  Me, I just stick with food superstitions.

Early on in the playoffs, I started cooking this hash for dinner. It’s a quick dinner, comes together in a hurry so I don’t miss any of the game in the kitchen.  Every time I made this, the Royals won.

And then we decided to go to our favorite taco spot for dinner to watch the game one night.  The Royals lost.  And it was surely because I didn’t cook this hash. See how this works, this whole food and baseball superstition thing?

So it came down to the last game of the World Series and I knew I had to make this one more time. Alas, it wasn’t enough for the Royals to win the World Series. I’ll keep hoping they make it into the World Series next year and bring home the win this time. And in the meantime, I’ll be making Curried Sweet Potato and Cauliflower Hash. 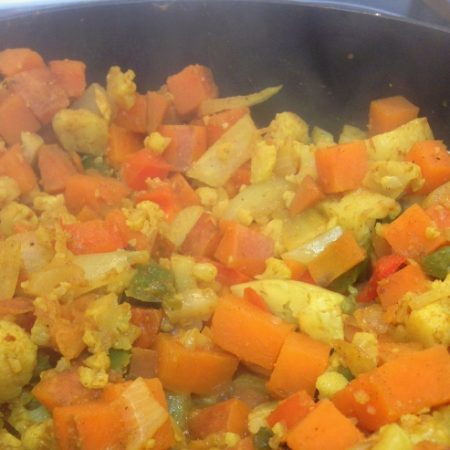 I’m linking this post up with Gluten-Free Wednesdays.  Click through for many more recipes! I am also linking up to Gluten-Free Fridays at Vegetarian Mamma.